New World Symphony to take its WALLCAST to the drive-in 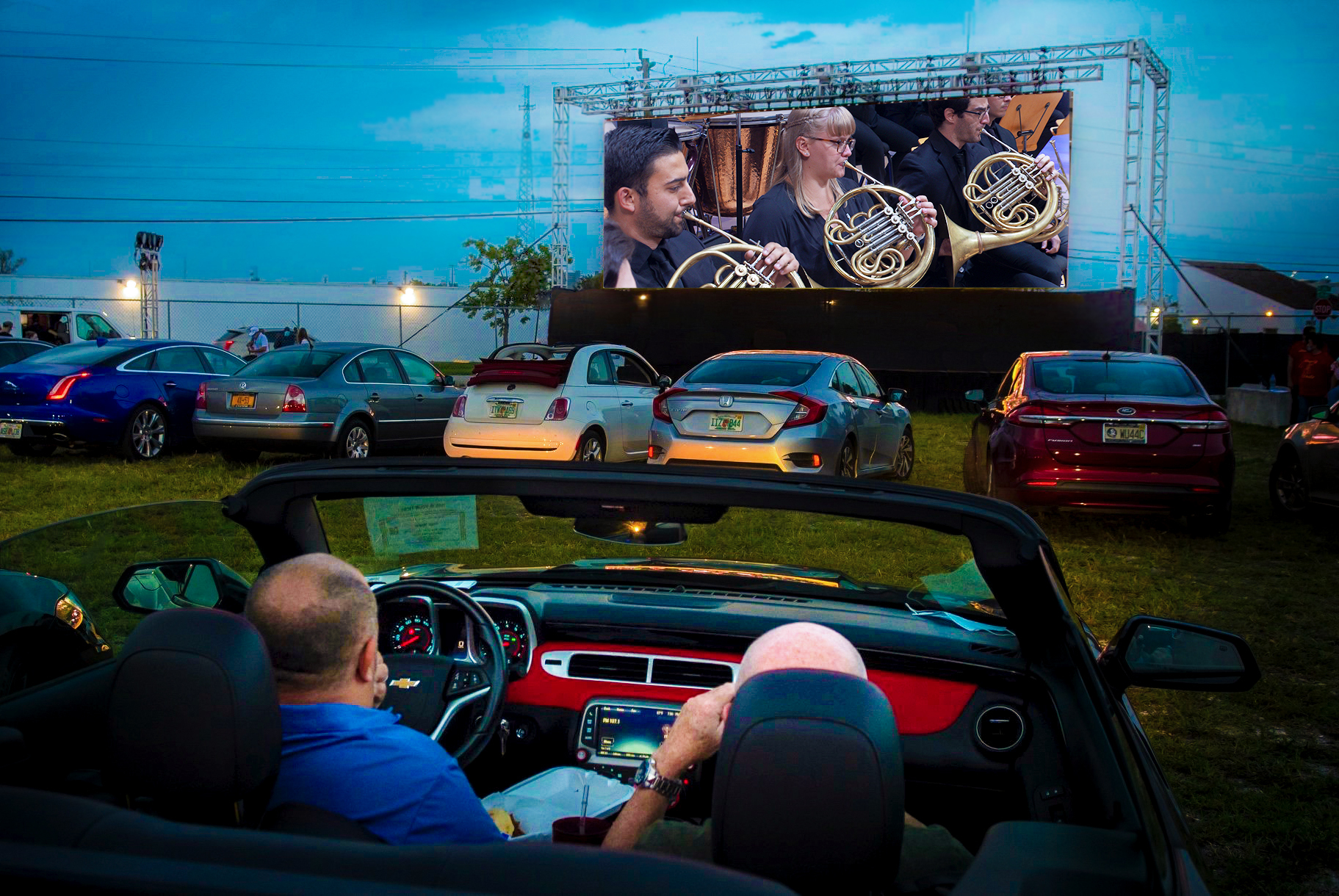 When it can be in full performance mode, the New World Symphony typically has two audiences for its classical concerts.

There are those wishing to be indoors – in the 756-seat, Frank Gehry-designed concert hall – to take in the live music, and those who savor the experience while relaxing in SoundScape Park, on the lawn of the sprawling, two-block symphony campus at 500 17th St. in Miami Beach. The latter bring blankets and lawn chairs to see and hear the WALLCAST broadcast on a 7,000-square-foot projection wall on the side of the New World Center.

“When we began WALLCAST, we were creating a drive-in movie theater of sorts,” says NWS president and CEO Howard Herring. “Now we’re taking classical music to the drive-in.”

This will be the symphony’s first in-person event since the pandemic began, Herring says, and it is planned as a celebration of the communal concertgoing experience   ̶   a “Best Of WALLCAST” program   ̶   to be shown on Dezerland’s 40-foot LED screen. Music will be simulcast via a channel available through car radios.

“We have done 106 WALLCASTS since we started the project in January of 2011 and, from that archive, we have put together a 68-minute program of some of the most dynamic of those performances,” Herring says. 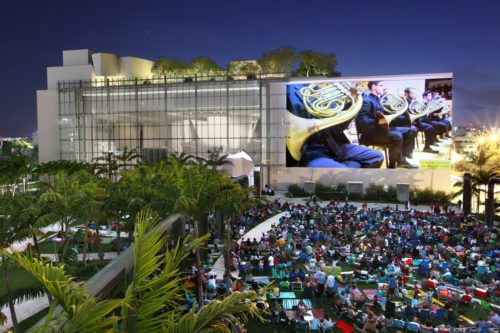 Past WALLCAST concerts at SoundScape Park have drawn 300 to 400 people, according to NWS president and CEO Howard Herring. (File photo courtesy of Rui Dias-Aidos)

The program will include highlights from concerts led by NWS co-founder and artistic director Michael Tilson Thomas and French conductor Stéphane Denève. Herring says the pièce de résistance of the evening will be one of the best of the best concerts, from Venezuelan pianist Gabriela Montero in 2018.

There also are plans for a small chamber group of NWS fellows to perform live at Dezerland. Food trucks will be on-site.

In planning the new season, the NWS team didn’t feel the lawn – with the large gatherings that WALLCAST typically draws – was feasible.

“We’ve had 300 to 400 people there,” Herring says. “We know that 80 percent of that audience comes in groups of five or more, which is to say it is a community event.”

Despite the pandemic, NWS hasn’t missed a beat, Herring says. “We are up and running.”

He adds: “We have 35 independent projects that will be online, which are conceived and executed by the fellows. For us, it was a quick move to say, ‘Well, if we can’t play live in the hall, we can do plenty of other performances.

“We will do every bit as much of public performance this year as we usually do in a year that is not governed by a pandemic, just in other ways.”

The symphony was founded in 1987 by Tilson Thomas, along with philanthropists Lin Arison and the late Ted Arison. It is made up of advanced orchestral fellows who have competed from across the globe to participate in three years of intensive training. There are only 35 spots per year, and 87 of those musicians comprise the orchestra.

Like most everyone, NWS is eager to return to business as usual – that is to get people back in the concert hall and in the park.

“We will get to December and we will evaluate and see what’s possible [regarding live performances],” Herring says. “We’re just going to take this as it comes, but the essence of this is that we are still vibrant.”

WHAT: NWS at Dezerland Park, a WALLCAST concert season opener