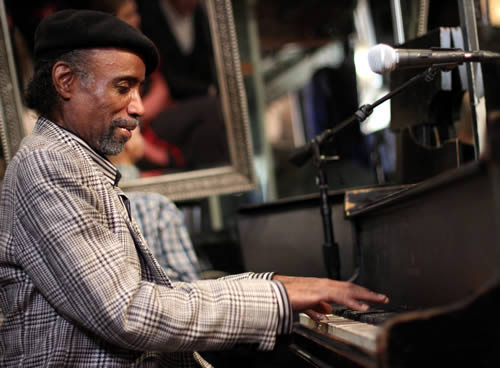 Perhaps you’re wondering what singer-pianist Johnny O’Neal will do during his appearance on Saturday. So is he. “I never go by a set list,” says O’Neal, who will perform at the Miami-Dade County Auditorium, the first performance of Tigertail Production’s season. “I don’t like not being in the moment.

“I don’t want to sound braggadocious, but I have a lot of variety, from pop to gospel to blues, current stuff, modern contemporary stride piano…”

It all started when a rendition of Erskine Hawkins’ “After Hours” by his father, also a singer and pianist, inspired 13-year-old O’Neal to study piano. He was a natural. “It only took a few months of piano lessons,” he remembers. “I started playing for a church like two months after I learned where the keys are.”

Gospel music was his first love, and he remembers winning piano competitions in that genre as a young man in Detroit, where he was born in 1956. “I never really felt that I would be a jazz cat,” he says. That changed during a trip to St. Louis, where he had gone to play standards in a hotel.

On his first night in town, he found himself in a cab driven by a jazz fan. “He said, ‘I’m going down to this jazz club now, I’ll take you where you want to go afterward,’” O’Neal recalls. He wound up sitting in with the performers and getting booed offstage. But it got better. The group was losing its regular pianist and the leader asked O’Neal if he’d like the job. The young man hesitated.

Eventually O’Neal returned home and surprised everyone with his new chops.  “That was the whole talk of Detroit: Johnny’s playing jazz.” In 1981 he moved to New York City, where he started to play with the likes of Kenny Burrell and Dizzy Gillespie. O’Neal also has worked with Art Blakey, Clark Terry, Nancy Wilson and Lionel Hampton, to name a few. But he packed up and left the city after being mugged in 1986.

Though he was little noticed for years after that, O’Neal continued to work. He played Art Tatum in the 2004 movie Ray, which starred Jamie Foxx as Ray Charles. He says he was shocked to be asked to participate; the legendary jazz pianist Oscar Peterson had recommended him.

O’Neal remembers being in Birmingham, Ala., the morning he was contacted.  Later that day he was in New Orleans for what turned out to be a very brief screen test. “Soon as I sat down, the director said, ‘That’s it.’ I didn’t even have to finish the tune. Jamie Foxx followed me around like a little puppy dog. He said, ‘I’ve never seen anybody play piano like you.’ It was great.”

O’Neal returned to New York four years ago. “My son said, ‘Dad, why don’t you come back to New York? New York needs you.’” A profile earlier this year in The New York Times drew lots of attention and O’Neal, once a regular in South Florida the during the season, is in demand again.

He frequently plays with young artists who are among the crowds who gather wherever he appears.

“More gratifying for me is that I came up at the tail end of an era where I was able to play with a lot of the masters,” O’Neal says. “All I’m doing now is passing it on.”

Johnny O’Neal performs Saturday at 9:00 p.m. in the Miami-Dade