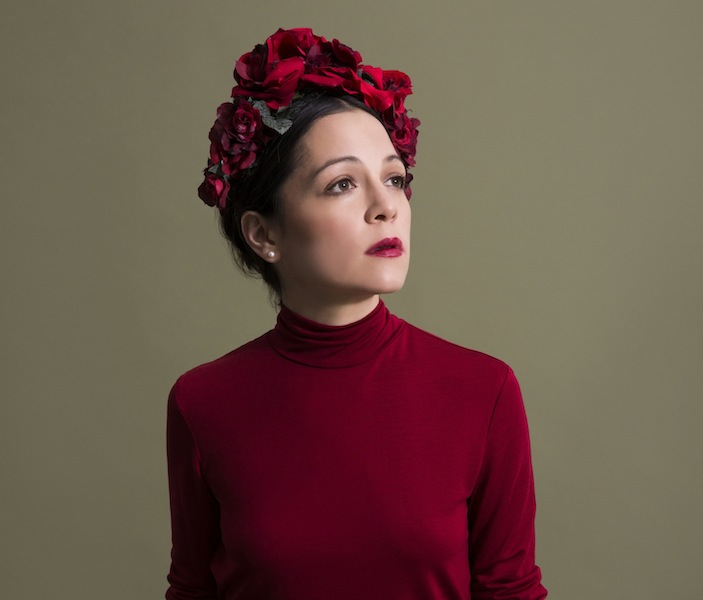 Mexican singer Natalia Lafourcade is as tiny as a house sparrow, with a voice as clean and pure as a bell. These delicate qualities belie a fierce inner strength and a steely artistic will. As an artist, she is flexible, shaping herself anew to fit the spirit and the times, but sturdy against the fickle, shifting winds of easy fashion. Miami audiences who haven’t already discovered her have the chance to do so for themselves when she plays the historic Olympia Theater this Friday.

Perhaps Lafourcade’s internal fortitude is a product of experience. This 33-year-old performer has been in the music business for nearly two decades. As a 14-year-old, Lafourcade sang with an all-girl bubble-gum pop group called Twist. Later, in 2002, a video for her first solo album casts her as a Bjork-like renegade in round, googly-eyed glasses and a pink quinceañera dress that looks like it came straight from wardrobe for the telenovela “Betty La Fea.” Just two years ago, she struck musical gold as a lovelorn indie rocker; her platinum-selling sensation, Hasta la Raíz, which traces the trajectory of a good love gone bad, garnered five Latin Grammys (she later went on to tie with Pitbull for a regular Grammy for best Latin rock, urban or alternative album). As for many a female pop idol, from Madonna to Shakira to Miley Cyrus, Lafourcade’s route to self-discovery has been a long and winding road.

Her latest release, a two-disc opus entitled Musas, seems at once a radical departure and a natural next step for her. If her previous album centered on the root of a love that digs deep into the soul only to be torn out, this new album is more outward bound, offering the hope of a fresh start. To find it, she goes back to the roots of Latin American popular music, mining the Golden Age that was the 1940s, ‘50s and ‘60s. She and her collaborators have placed these treasures in simple settings that allow them to glow with a wild beauty that has been stripped of pretense.

As she set about to explore this music, Lafourcade found she needed experienced guides. She approached Los Macorinos, the guitar duo of Miguel Peña and Juan Carlos Allende, who accompanied the legendary Chavela Vargas throughout the last 10 years of her career. “When I heard them playing, I fell in love,” Lafourcade said simply. As they worked together, the two men, who are both some 40 years her senior, taught her a deeper way of paying attention: “I had to learn about patience, to let the music get its own spirit and voice.”

Over a year-long period the trio bonded over dinners at Lafourcade’s home, with no real plan for an album in mind: “I was just trying to get closer to the music that I love and to make this project. But I wasn’t really thinking about putting it out,” she said. “It was beautiful because we were rehearsing a lot and we were playing a lot and that gave me the chance to connect to the meaning of the lyrics and the music and the harmonies and the rhythms.” They narrowed down a list of some 100 songs to just the handful that Lafourcade felt would resonate most with her voice and her style.

When Lafourcade’s label, Sony, eventually heard the work, they decided it would make a fitting follow-up for the wildly popular Hasta la Raíz album. By today’s standards, the new work would be a minimalist endeavor: “The rules for the project that I set were that we were going to record with acoustic instruments,” said Lafourcade. “I just wanted acoustical guitars, el cuatro venezolano, jaranas, viruela—all traditional instruments.” Fittingly, they recorded these down-to-earth songs the old-fashioned way, playing full takes acoustically together in a room until the sound, with its perfect imperfections, was what they wanted.

One of the cuts on Musas is a duet of the torch song “Tú Me Acostumbraste” with the inimitable Omara Portuondo, the 86-year-old Cuban chanteuse of Buena Vista Social Club fame.In a video released with the album, you can watch as Lafourcade wraps her voice around Portuondo’s deep and smoky singing in a musical gesture as tender as when she lies down on a couch beside the older woman and gently caresses her head.

Indeed, all of the new videos for Musas demonstrate what masters of image and mood are Lafourcade and her team. The storyline of the vignettes that surround the songs are straightforward: A dance party where each of your hipster friends is more interesting-looking and talented than the next; a drown-your-sorrows-in-tequila scene in which you pour your heart out to two of the greatest acoustic guitarists on the planet. The colors are luscious and rich, the production values are stellar, the characters intriguing. But it is the music itself, a steeped-in-nostalgia yet somehow totally new sound that Lafourcade and her group have created that draws you in and keeps bringing you back.