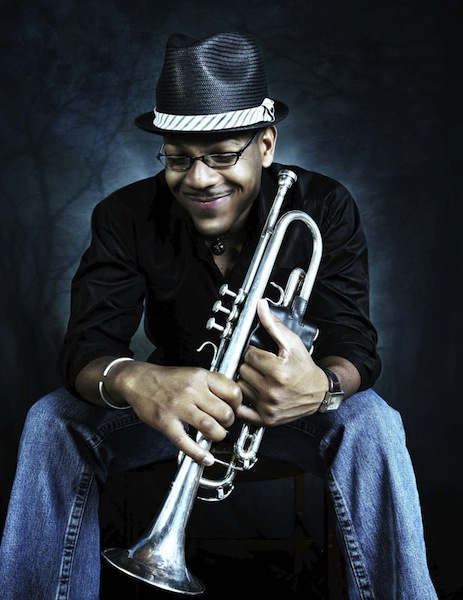 Trinidadian trumpeter Etienne Charles performs at the South Miami-Dade Cultural Arts Center as part of the Miami Nice (as in Nice, France) Jazz Festival on Saturday, Nov. 1. “You can expect not your typical jazz concert,” says Charles. And the 31-year-old isn’t your typical jazz cat, if there is such a thing.

His family is a musical one from generations back and he started his career working alongside his father, Francis Charles, in the famed steel band Phase II Pan Groove. Jazz was kind of a late addition to his musical portfolio.

Growing up in the two-island nation of Trinidad and Tobago, “Jazz was very limited in terms of what I was able to find and check out,” he recalls. “This was pre-YouTube, pre-iTunes.” His local record store didn’t offer much; his father’s collection did include some recordings by Wynton Marsalis and the saxophonist Frank Morgan. But it was at Florida State, where he studied with the pianist Marcus Roberts (who has worked with Marsalis), that he was really able to get into jazz — and the music into him.

The university library opened new musical worlds for Charles to explore. “I would always end up listening to records that were about fusing or bringing back a root groove to the jazz tradition,” he says.

Writing in The New York Times, Ben Ratliff called the music of Creole Soul, Charles’ most recent release on his own Culture Shock label, “ easy to listen to. It could and should extend his appeal to listeners who like R&B or various adult-contemporary offshoots of jazz. But it’s also intellectually sound, going deeper into Mr. Charles’s basic interest, which is the affinities between Caribbean music and music from the American South, New Orleans jazz in particular.”

In addition to some original compositions, Creole Soul, which came out last year, features such familiar songs as Bob Marley’s “Turn Your Lights Down Low,” Thelonious Monk’s “Green Chimneys” and “You Don’t Love Me (No No No),” a huge hit for the Jamaican singer Dawn Penn, re-imagined by Charles, who is influenced by pretty much everything.

The creole concept lies at the heart of his work. Asked to expound, Charles, a member of the faculty at Michigan State who earned his Master’s degree at Juilliard, is instantly professorial. “By definition in the dictionary, creole is anything that’s born in the new world. We define the new world as the Western hemisphere, basically.”

About four years ago, he began researching the different cultures that have shaped him, starting with his family: his people hail from all parts of the Caribbean and a grandfather is of Spanish heritage. “By blood alone you get the idea of me being a creole. Trinidad is a creole culture. We are Trinbagonian.”

His native Trinbagonian culture features African, Indian, and Middle Eastern influences, Charles notes.  Also, he’s a jazz musician who’s lived in the U.S. for 12 years now and has considered the interchanges between early jazz and what would become known as calypso.

“All of those exchanges inform me,” he says. “Creole is about really embracing all the cultures that make up your immediate environment and your greater environment.”

“Basically to me, jazz has always had a Caribbean element to it,” he says. “We’re just trying to continue that model.”