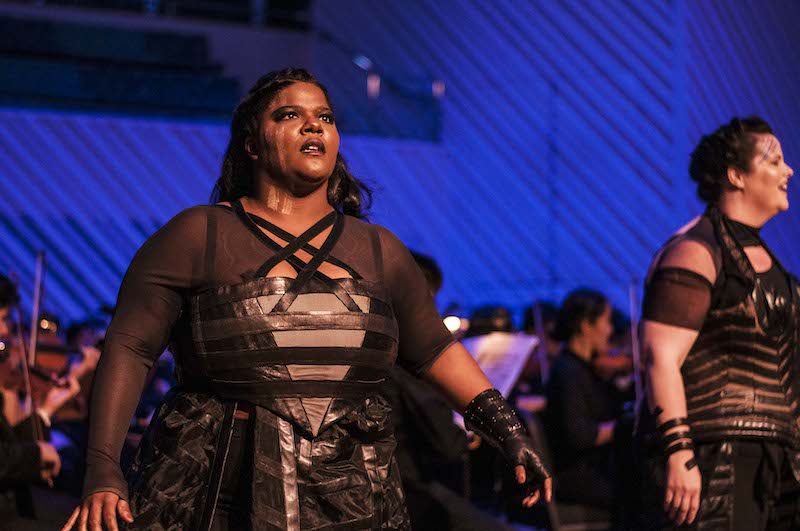 Not everybody who begins a musical career at age three singing in his grandfather’s Pentecostal Church finds his way to the Metropolitan Opera in New York. Soloman Howard did in two short decades. Howard, who never stopped regarding music as ministry, will perform this weekend at the Arsht Center as part of the Miami Music Festival’s Wagner Institute.

The evening, which includes selections from the Ring Cycle’s Die Walkure and Götterdammerung, will also feature Grammy-award-winning soprano Christine Brewer, as well as the Miami Music Festival’s 100 piece orchestra. Brewer, whose voice is critically acclaimed as “searing,” “stunning” and “magnificent,” finds herself in the thrall of Wagner. “He not only changed the way I approach music, but the way I understand life, ” she says. “Wagner creates a world of beauty, but all that is also painful. Wagner is forever a tug at my heart.”
This is the second year that the Miami Music Festival, an intensive summer training for emerging and accomplished musicians, has offered young musicians the opportunity to dive head first into Wagner during the three-week Wagner Institute, a hyper-intensive study within the wider program. Such attention seems fitting. Howard calls the German composer’s music as nothing less than “the triathlon of the Olympics.”
Howard has recently toured countless countries singing with one shimmering orchestra after another, and starring as Martin Luther King in Washington, D.C.’s premier of the recently reworked Phillip Glass opera, Appomattox. Why would he take time off to come to come to study Wagner in Miami?
Before he answers that question, Howard lingers for a moment, as though in homage to Glass. As Glass worked on his score in D.C., he had turned to the young singer. “Does this feel right?” he had asked. “I don’t have words to describe how I felt when again and again Phillip Glass would turn to me — who was I? –asking such a question.”
Still, Solomon moves seemlessly from Glass to Wagner. “Why wouldn’t I jump at the chance to work with Christina Brewer? And with [bass-baritone] Alan Head, renowned internationally not only for his singing, but his acting. Why wouldn’t I come to learn from them in a safe place?
“Besides all that, I was blessed with one loud voice.” Indeed, most critical reviews of Howard’s truly remarkable range can’t help themselves from including some word-play referencing “it’s all about the bass.” And then there is the extraordinary sonority within that bass, also described as “superhuman” by the Denver Post and “a triumph” by London’s The Guardian.
“With Wagner, a voice has to manage to be heard amid all the orchestra’s many instruments,” Solomon continues. “Singing is my path, my God-given gift, that is how I think. That is how I live. So if I am to honor that then I need to learn how to best develop it. Some of Wagner’s Ring roles seem almost written for a voice like mine. This Institute enables me to learn from those who know him well and are generous with what they know. How could I not make time and gratefully to come?”
Howard almost became a football player. That was his dream back in high school in D.C., when he was catching air balls in the corridors between classes. When a music teacher happened to hear him sing and called him in, it wasn’t for the reprimand that he expected.
That teacher opened doors that lead to undergraduate work singing with Baltimore’s renowned Morgan State University Choir. Graduate work at the Manhattan School of Music followed. There, “thanks to professors who had far more faith in me than I had in myself,” Howard began to understand that opera was the best possible fit for his voice.
Still this was a young man who had first approached this world unable to read music, let alone have the background in languages that would make his way into opera a bit easier. These days he often spends far more than an hour per page of musical score working not only with musicality, but with diction.
As rich as are his gifts, didn’t he feel apprehensive knocking on opera’s door? “Never,” he says. “Remember I had played football. I learned that if one approaches anything with fear, then other things take over. Or to paraphrase Will Smith, “to have a Plan B distracts from Plan A.”
Miami Music Festival’s The Wagner Institute, opera from the Ring Cycle, July 22, 7:30 pm; Arsht Center For the Performing Arts, 1300 Biscayne Blvd., Miami; tickets $25-60; www.miamimusicfestival.com.