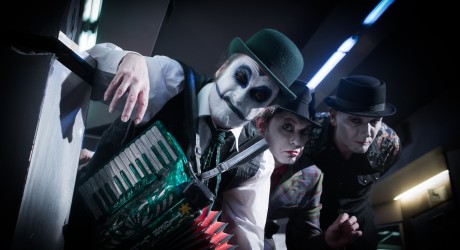 “The cancer’s got its grip upon you More evil than a grinning clown More evil than the harbour in Shanghai In which the suicides do drown.” No, this is not a Halloween ditty; it’s the opening lyric from “Blood Alley,” on The Tiger Lillies’ latest album, Either/Or. The ghoulishly comedic musical trio is led by songwriter Martyn Jacques. They will capture and inhabit the Light Box at Goldman Warehouse Nov. 1 and 2. When Misery Guts Music is the label, what can you expect? Miami Light Project knew, because it booked the band in 2011 as part of the Sleepless Night festival. The middle-of-the-night performance drew cult followers and newbies out onto the sands of Miami Beach to dance in the rain. This weekend’s performance will be more physically comfortable, but Light Box patrons should be prepared for a deluge of mental and emotional provocation. Audience members often find themselves laughing uncomfortably at thoroughly depraved lyrics. But generating this kind of discomfort is central to The Tiger Lillies’ mission and their appeal. Jacques is principal songwriter and lead vocalist; he also plays piano and accordion. His operatic “castrato” voice can pour forth with the creepy, fiendish ugliness of Marilyn Manson (with makeup suggesting The Scream movie mask), but it can also turn rueful and sweet, recalling Tim Buckley’s plaintive delivery of the 1968 song, “Once I Was.” According to Rebekah Lengel, the managing producer who has been with Miami Light for 12 years, “They sing about drug addiction, alcohol and prostitution, so the performance tends more toward an R-rating than PG.” That’s an understatement. Conjure up the falsetto of Monty Python’s drag-dressed Terry Jones in “Spam,” but singing over a rollicking accordion cascade: “I’m bang, bang, bang, bang, bang, bang, bang, banging in the nails.” Yes, those nails that held Jesus to the cross. The lyrics are from The Lillies’ 1996 album The Brothel to The Cemetery album, and the London-based band hasn’t softened over the intervening years of life on the road. Among their kindred spirits: Tom Waits, Dame Edna, Bertolt Brecht/Kurt Weill and New Wave Klezmer music. They are, by turn, romantic and blasphemous. Listen for murder, toilet humor, rainbows and abundant sexual references. But The Tiger Lillies is not a novelty act; the esteemed Kronos Quartet has seen fit to accompany them on stage and to record an album with the band. Their over-the-top vocal and lyrical antics are accompanied by great musicianship, with Jacques twisting the accordion in and out of its customary sentimental and comic tones. They offer social commentary, exploring transgressive behavior, but also deep longing and (like recently departed Lou Reed) sympathy for society’s outcasts. Adrian Stout has been a Tiger Lilly since 1995; he’s an accomplished acoustic bass instrumentalist, but also a comic, sometimes dressing weirdly, prancing and taking up the musical saw and theremin. Adrian Huge uses various percussion instruments and toys — possibly including a traditional drum kit — for his contribution to the artistic mayhem. Following The Tiger Lillies’ performances, there’s a break in the Miami Light Project’s schedule until Jan. 24, when dancer and choreographer Nora Chipaumire returns with Miriam, based on the life of South African singer and civil-rights activist Miriam Makeba. (Chipaumire shared her dance chops and personal dynamism with a fortunate cadre of Miami’s dance community during a summer artist residency sponsored by Miami-Dade College.) Miami Light hits its stride with a series of six diverse performances between February and May. While artistic and executive director Beth Boone recruits cutting-edge talent from around the globe, Miami Light’s signature program is locally oriented. Here and Now, in its 15th season, will feature commissioned performances in May by Miamians Letty Bassart, Ana Mendez, Abel Cornejo, David Rohn, Danilo de la Torre and Juan Carlos Zaldivar. In the early years after its founding in 1989, Miami Light Project was a nomadic production, presenting in venues across the county. But since making its home in the 12,000-square-foot multi-purpose Light Box at Goldman Warehouse in Wynwood, it has broadened its educational mission. A technical training fellowship helps develop critical talent in lighting, sound design, video projection, set production and other “invisible” skills, vital to the region’s cultural success. Additionally, Miami Light performers provide master classes and lecture demos in conjunction with their presentations. Educational alliances bring students from the neighboring Young Men’s Preparatory Academy and Design Architecture Senior High (DASH) into the Light Box for backstage and rehearsal insight and also bring artists to the schools. While a look through South Florida’s entertainment listings might suggest a competition for ticket sales among producers and venues, Lengel says there’s really a collaborative spirit. Every year Miami Light co-produces or co-presents with Fundarte, Tigertail, the Arsht Center, Rhythm Foundation and others. (Chipaumire’s January performance is a co-production with MDC Live Arts.) Additionally, they cross promote performances through email and social media. The Tiger Lillies may be an acquired taste, but Miami Light Project can be counted on for a full season of unique offerings to provoke and satisfy a broad range of cultural appetites. The Tiger Lillies, Nov. 1 and 2 at The Light Box at Goldman Warehouse, 404 NW 26 St.; at 8 p.m.; cost is $25-$50; info 305-576-4350;  www.miamilightproject.com Photo credit: Photo credit Arnold Pöschl

The Dec. 2 season opener, “Unmasked,” will bring together the Institute of Contemporary Art, Miami and the nonprofit Girl Power.
Continue Reading

The free radio-style episodes tell a coming-of-age story about a young girl running away to escape her broken home.
Continue Reading