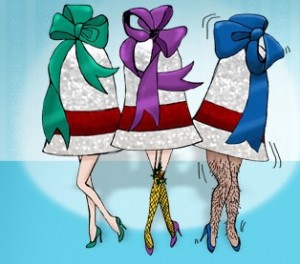 Identity politics and identity-based art aren’t new. As Miami Gay Men’s Chorus director Anthony Cabrera stated, “For many years GLBT choruses were singing … so that we could point out what makes us different.” Assertions of selfhood, power, and originality have demanded expression by people whose body size, shape, color, language, and other distinctions caused them neglect or abuse. Over the decades, the marginalized have entered the mainstream, but obstacles remain. The Miami Gay Men’s Chorus’ spring performance at the Colony Theatre, aptly titled Absolutely Normal, skillfully navigated this territory, teasing out nuances, rebuking the cruelties and missed opportunities that arise from stereotyping (the chorus returns to the stage this weekend for a holiday Bells In Boyland concert at the Colony). Far from heavy-handed preaching, the previous program of 10 songs in the first half and a one-act choral musical in the second, deftly slipped from humorously maudlin complaint (tongue in cheek) into biting, sometimes self-mocking pleas for love and acceptance. Clichés of vocal inflection and gesture were inside jokes and never tiresome. Vocal clarity and power were nearly always calibrated to what the music demanded. Deficiencies in sound equipment or lack of enunciation muddied an occasional punch line, but this was rare. The soloists, duos and trios, who sang with choral and instrumental accompaniment — all tightly directed by Cabrera’s sure hand — unfailingly connected with their embracing audience. Strong and versatile instrumental support (bass, guitar, and drums) was led by the chorus’ accompanist and principal pianist, Chris Lobdell. The songs were not all frolicsome. “Will it always be like this? Is everything set in stone? Is there nothing I can fix? Will I always be alone?” These were the heart-rending questions left in a notebook by 17-year-old Bill Clayton, an Olympia, Wash., youth who committed suicide after being bullied by schoolmates. The vivid response was written by his mother and powerfully delivered: “There IS so much we can change. And we’re not in this fight alone.” The message was potently delivered by penetrating solo singing, a tight choral echo and resonant instrumental accompaniment by Lobdell and the responsive ensemble. The ironic “I Don’t Like Showtunes” featured a playfully embattled soloist, Jay Figueroa, trying to hold his own against an overwhelming tide. A Stephen Sondheim song from Company struck a wistful, imploring note: “Marry me a little; love me just enough; warm and sweet and easy; just the simple stuff.” The soloist, John Wade, delivered the requisite tonal range from nightclub intimacy to Broadway power. There was a playful and embracing song “for you straight guys, dragged here by your girlfriends — or maybe just curious.” “Alexander’s House,” the one-act play that constituted the matinee’s second half, is a complex choral drama (music and lyrics by Michael Shaieb; book by Schaieb and Brent Lord). Cabrera revealed the back story: “Alexander’s House” was commissioned by the Gay Men’s Chorus of Washington, D.C. during a two-year process, in which composer Shaieb collected members’ stories and formulated “a mash up of all of these gentlemen’s lives.” In fact, a member of the MGMC sat with the D.C. group, so his story became part of the performance. “Alexander’s House” called for expanded orchestration with trombone, oboe, synthesizer, harp, and cello, whose empathic voices helped articulate the complex dramatic dance and singing program. The sequence of interludes was echoed and amplified by the chorus. It’s the heartbreaking story of a family, shattered when a father, Alexander, acknowledges his homosexuality. He loses the affections of his wife and son, Sam, and lives a secret life with his partner, Carson. They carouse in Alexander’s beachfront house with their flamboyant pals. Alexander’s sudden death further shocks his friends when they discover that he has bequeathed the house to Sam, now 20-something, rather than Carson. Sam arrives to take possession, while “the boys” are reminiscing and tidying up. They all manage to overcome mutual preconceptions and unchallenged stereotypes during an often awkward and always ardent recounting of Alexander’s life, presented in flashbacks. The confrontations between Alexander and his father; the repression of forbidden urges; hurtful childhood games and awkward romantic awakenings are conjured up via Alexander’s photo album. Compelling songs and dances gave his story a vivid presence and demonstrated the cast’s virtuosic talents, fully integrated with imaginative staging and lighting. “Baseball Camp” was one of the best set pieces, as eight dancers showed their chops, tapping and singing in a mix of macho bravado and burlesque. A pile of wrapped, but never delivered, birthday gifts from Alexander to Sam are opened and investigated, shedding light and healing on father and son. Sam and Carson bond too, as each learns more about the man they “shared,” but couldn’t fathom. Sam discovers a missing father’s love, and Carson movingly sings, “We never quarreled, but there was a part I never knew. I’m a stranger, too.” After the performance, Cabrera, accompanied by his young daughter and his male partner, addressed the audience. He asserted that signaling differences isn’t so important any more. “We have the capacity to love, establish families, we have friends, we love other people … and those things that make us different are the equivalent of one grain of sand on the beach of life. And so, that’s what Absolutely Normal is about.” He conducted the audience as surely as he had led the chorus and musical ensemble. “Bells in Boyland” holiday concert program includes special guests and a hand-bell choir. Dec. 20 and 21 at 8:00 p.m. and Dec. 22 at 3:00 p.m. at the Colony Theatre, 1040 Lincoln Road, Miami Beach. Tickets start at $30. Info: 305.674.1040; www.miamigaychorus.org.

The program, which included spoken-word performances, was offered in-person at the Miami Beach Woman’s Club as well as online.
Continue Reading

The Latin Grammy-winning musician and his trio will present a fundraising concert for in-person and virtual viewing.
Continue Reading