Miami Beach’s GroundUP fest to unite music lovers, musicians from around the globe this Valentine’s weekend 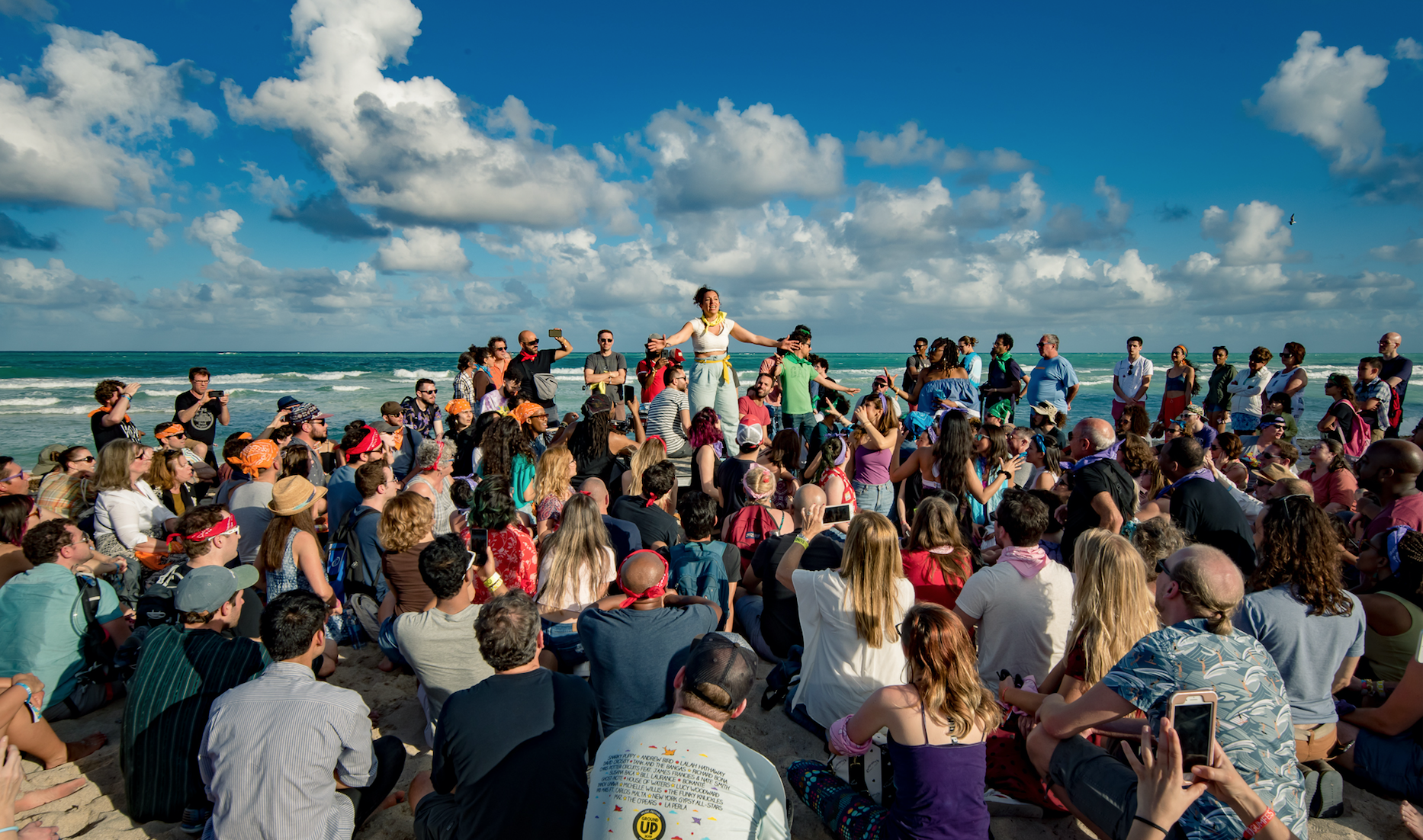 One of the highlights of the GroundUP Music Festival is Banda Magda’s A Capella by the Sea, in which festivalgoers head to the beach for a community singalong led by Magda Giannikou. (Photo courtesy of Stella K.)

If it’s music that your heart is hungry for this Valentine’s Day weekend, a smorgasbord awaits you at the fourth annual GroundUP Music Festival in Miami Beach.

This three-day concert experience at the North Beach Bandshell features an eclectic blend of musicians and an intimate approach to music. It was created to bring together great performers in a laid-back setting that encourages up-close interactions – not just between musicians, but also between the performers and their audience.

“It’s jazz and it’s rock and it’s world and it’s folk and it’s funk, it’s all the different things,” said GroundUP CEO and founder Paul Lehr. “It’s not pigeonholed as one thing or another.”

The festival is the brainchild of Snarky Puppy, the funk and pop-infused jazz band out of Brooklyn that organized the first GroundUP Music Festival in 2017, bringing along with it a huge following of intensely loyal fans willing to travel here. Since then, the festival, which is co-presented by The Rhythm Foundation, continues to draw fans from around the country and the world.

In putting together the roster of artists, Lehr noted nice guys and gals finish first: “What we look for are two things: It’s artistry, and it’s sort of thoughtfulness and kindness. The artists who we bring in are really interested in the music and in being here.”

Although GroundUP occupies a large swath of the beachfront park south of the bandshell — there is a second, smaller stage; a palm grove for lounging in hammocks and such; and a building where talks and classes take place — the North Beach space is tiny compared with other festival venues around the country.

This cozy setting means festivalgoers can rub shoulders with their favorite artists without feeling like paparazzi. Musicians don’t just fly in, play, and fly out. Between master classes and sitting in with other artists, they are on-site for the entire weekend. It’s one of the festivals biggest draws.

“You know, the barriers are broken down …  so it’s the artists and the audience all hanging out, and it’s great fun,” Lehr said.

Snarky Puppy will perform every day, as will Chris Potter, the jazz saxophonist who is artist-in-residence this year and will sit in with a number of different performers.

The festival will kick off at 4:05 p.m. Feb. 14, when Portuguese jazz singer Sofia Ribeiro takes the stage. Although she was born an ocean away from Brazil and a few decades late for the Tropicalia music movement of the ’60s, the luscious sensuality of Ribeiro’s voice would have been right at home in that cultural moment.

There are a number of Latin American artists this year as well, such as Mexican singer-songwriter Lila Downs and the all-female mariachi band Flor de Toloache. Drummer, vocalist and composer Yissy Garcia, who follows Ribeiro’s set, descends from Cuban jazz royalty: Her father was percussionist Bernardo Garcia, a founding member of the iconic group Irakere. At 32, she’s a musical revolution in her own right. While drumming in Cuba has traditionally been the exclusive province of men, it isn’t just her gender that sets Garcia apart, but also the virtuosity of her technique and the inventiveness of her compositions.

Feb. 14 is also the night to hear Michael McDonald, former lead singer of both The Doobie Brothers and Steely Dan. Though he will be in South Florida later this year for The Doobie Brothers’ 50th anniversary tour, GroundUP promises listeners a fresh take on the artist.

“We’ve put together this all-star jazz band to play along with Michael McDonald,” Lehr said. “It’s a really cool way to hear his music like you’ve never heard it before.”

McDonald will also be giving a master class in songwriting. Opportunities like this one make the GroundUP festival different, Lehr said.

“What we really try to do is reinvent how people connect to the artists that they love,” he said. “We wanted to have an intimate festival. Instead of going so broad, we wanted to go deeper with our audience.”

The workshops and classes, he said, have been extremely popular: “It’s very real … you’re sitting down and you’re talking to David Crosby, or Michael McDonald, or The Wood Brothers, and learning songwriting and asking the questions that everybody’s always wondered about…

“It really is a unique situation where you just get to hang out with … sometimes living legends, and just some of the greatest musicians on the planet, and everybody’s really chill about it.”

Miami native Cecile McLorin Salvant is scheduled to perform Feb. 16 at the bandshell for a general audience, but she will also be doing an acoustic set that day in an intimate pre-concert brunch for a lucky hundred or so VIP ticket-holders.

Her voice, Lehr said, “has this incredible character that harkens back to Ella and the greats.”

One of the most cathartic experiences GroundUP offers is Banda Magda’s A Capella by the Sea. On the last day, festivalgoers will tromp down to the beach for a community singalong led by Magda Giannikou, who assigns parts and puts together an impromptu vocal piece.

“It’s just blown up into this giant thing,” Lehr said. “All these unsuspecting beachgoers have no idea what’s going on, then they start joining in. It’s magical.”