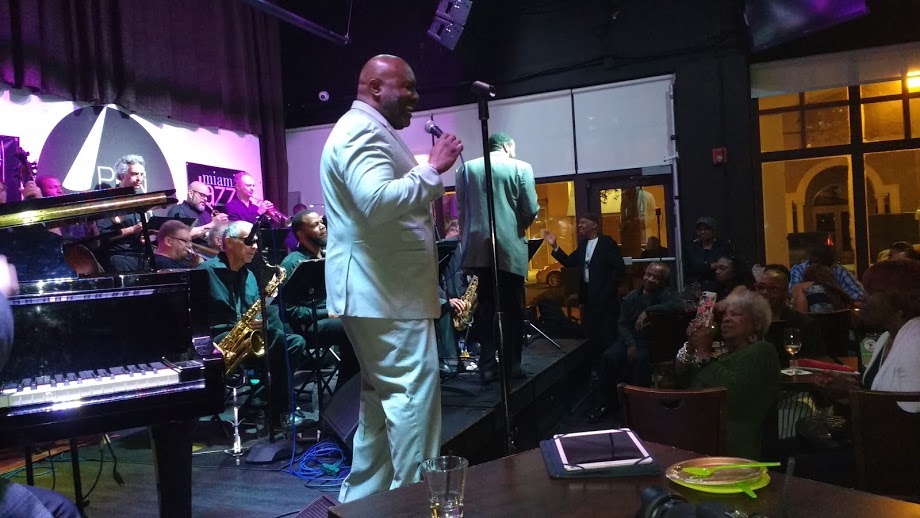 Music lovers have a rare opportunity to catch a South Florida favorite in concert when the 18-piece Melton Mustafa Orchestra plays July 29 in Coral Gables.

Melton S. Mustafa, a beloved trumpeter, composer, educator and bandleader, died in December 2017. His namesake orchestra plays on, still led by a Melton Mustafa — his eldest son, Melton R. Mustafa, also known as Melton Mustafa Jr. In addition to his career as a working musician, the younger Mustafa is a Broward County public-school teacher. He first led the big band several years ago, when his father became ill with cancer and there were shows that had to go on.

The Melton Mustafa Orchestra came to be in the 1980s, when the elder Mustafa, a native Miamian, tired of constant travel. “My dad decided to not be a full-time touring musician with the [Count] Basie band,” Mustafa says. “He decided to start his own band back in Miami using some of the prominent international musicians that live in town.

That’s the kind of thing showgoers can expect July 29 at the Open Stage Club.

“I’ve always made sure that I stay with the idea of my dad’s original arrangements,” Mustafa says. “Not that I’m not an advocate of other music, because there’s so many great big-band charts, but what’s the sense of having your own band if you don’t play your own music?”

The late Mustafa, a member of the South Florida Jazz Hall of Fame, was a prolific composer as far back as junior high school, according to his son.

“My dad has a file cabinet full of music that I haven’t even had a chance to dig into yet,” he says. 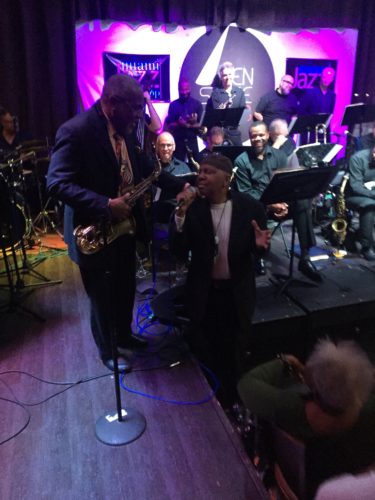 The Coral Gables show will include songs featured on the orchestra’s albums. Band mainstays such as the elder Mustafa’s brother, saxophonist Jesse Jones Jr., a star in his own right; son Yamin Mustafa, also a trumpeter; drummer James Cotmon; and pianist Jim Gasior will be onstage, along with the orchestra’s voice, LeNard Rutledge.

The performance is part of Summer of the Big Bands, presented by the Miami Jazz Co-op on Mondays.

“Our audiences love big bands. I love big bands,” says Rick Katz, executive director of the organization, which promotes jazz in South Florida. “In the summer of 2017, we featured a couple of big bands and packed the Open Stage Club. In 2018, we decided to declare it the Summer of the Big Bands and presented nine bands over the course of the summer. It was a big success. So when it came time to plan our schedule for this summer, we did it again.”

This is the Mustafa orchestra’s second time in the lineup, Katz says. “First, it is a great band, and Melton Mustafa Jr. is doing a wonderful job continuing his father’s legacy as the leader of the band. Second, the MJC is proud to play a small role in continuing the Mustafa legacy by providing a stage and audience for the Melton Mustafa Orchestra.”

While world-renowned musicians such as James Carter and Wycliffe Gordon are featured, the orchestra is always the centerpiece of the Melton Mustafa Jazz Festival, held every February for more than two decades.

“You know, the Melton Mustafa Orchestra is a family and the guys that are playing in this band loved my dad,” Mustafa says. “So my hope is to continue the legacy that my dad started.”

Top photo: The Melton Mustafa Orchestra performs Nov. 28, 2017 at the Open Stage Club. LeNard Rutledge, with microphone, is singing; bandleader Melton Mustafa Jr. has his back to the camera. The late Melton Mustafa stands at the corner of the stage, gesturing to the band. Photo courtesy Tracy Fields.