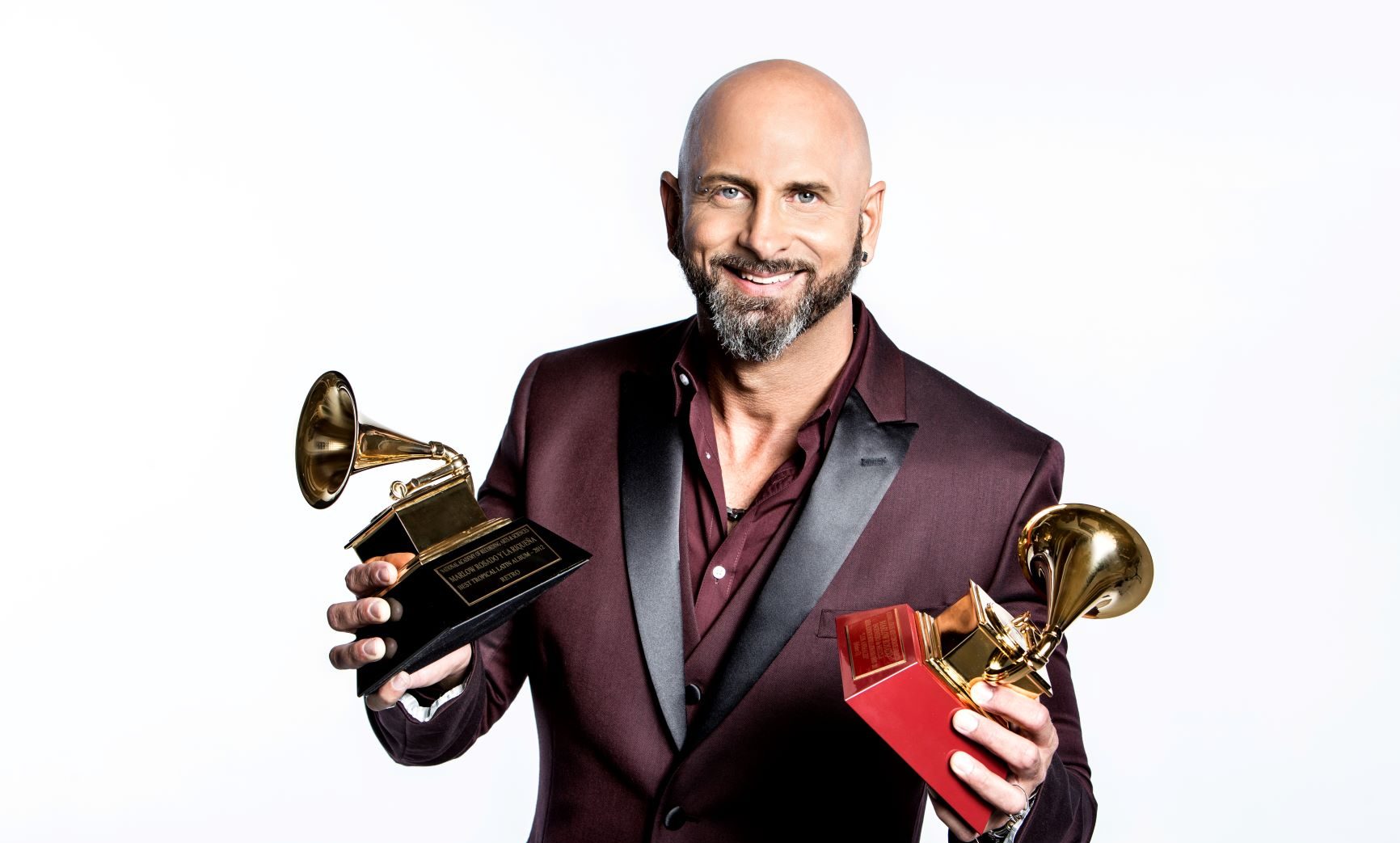 Marlow Rosado, seen here with his Grammy and Latin Grammy awards, is promoting two new albums, both born during the coronavirus lockdown. (Photo courtesy of the artist)

During the pandemic’s darkest days, when clubs were shuttered and his performances were canceled, Marlow Rosado retreated to his Miami Lakes recording studio. He had traditional salsa, a lifelong passion, and Zen, a longtime interest, on his mind.

Rosado, 52, a Grammy and Latin Grammy winner, has emerged with two new recordings and a sense of peace. The albums, he says, represent a new phase in his musical career and a cause for celebration.

“Los Colores de la Salsa” (The Colors of Salsa) is a modern take on traditional Latin dance rhythms that he recorded with his longtime friend, veteran vocalist Frankie Negron. The official video for the track, “Depende de Ti” (It Depends on You) has garnered more than 1 million views on YouTube since the album was released in early March.

“Orun” is a deeper, almost meditative recording and Rosado’s first Latin jazz album. (He interprets the Yoruba word as meaning a protective ancestral spirit.) The album also marks the first time the Puerto Rican musician has worked with Afro-Cuban jazz legend Chucho Valdés. The veteran musician is a guest artist on the track, “Marlow y Chucho,” which Rosado wrote.

“I was able to produce two amazing albums,” Rosado says. “They are very special because they came from a place of despair — of what’s going to happen, I’ve got nothing to do, no work, nowhere to go — to a place of hope for the future.”

Rosado is no stranger to beating the odds. His music isn’t played on Latin commercial radio even though he has won two of the music industry’s biggest awards: a 2012 “Best Tropical Latin Album” Grammy for “Retro,” which he recorded with his band, Marlow Rosado y La Riqueña, and a 2015 “Best Children’s Album” Latin Grammy for “Los Animales.”

He is one of salsa’s underground heroes.

“The overwhelming programing [on commercial Latin radio] is urban music,” says Rosado, a pianist, arranger, songwriter and bandleader. “There are thousands of ‘salseros’ with records out there, but there’s no salsa on the radio.”

Zen has helped him deal with the ups and downs of the music industry, he says.

Rosado was first attracted to Eastern philosophies as a teenager, when he picked up a copy of “The Pocket Zen Reader.” After visiting Nepal in 2007, to perform in a jazz festival, he was hooked. When the festival ended, Rosado spent seven days in the capital of Kathmandu, visiting a Buddhist temple.

He has returned to the Himalayan country twice: “Nepal was a life-changing experience.”

It’s among the poorest countries in the world, he says, “yet we have so much to learn from them.”

What Rosado learned was to try to see opportunities in life’s challenges, he says. His two new albums reflect this mindset.

“Colores” has Rosado’s trademark “salsa gruesa” (heavy) style – blaring horns, rapid-fire percussion and lyrical piano solos — with shades of urban music. He recorded the album with Negron, a salsa and Latin pop singer of Puerto Rican heritage, from New Jersey, who became popular in the late ’90s with hits such as “Con Amor Se Gana” (You Win With Love).

Rosado says he and Negron, who moved to South Florida a few years ago, went into the studio together, not knowing what to expect.

“It was a fun record to do because there was nothing else to do, we were in quarantine. So, we had a good time doing this,” Rosado recalls. “It’s probably the only record I’ve done that way … we were thinking, ‘If things ever get back to normal, we’re going to release this album,’ and we did.”

Rosado wrote most of the songs on the record, including the call-and-response “Depende de Ti.”

“It calls on younger Latin urban artists to ‘defend’ tropical Latin rhythms that first arrived in the Caribbean on slave ships,” he says. “We’re asking the younger musicians who are hot right now to respect this music, not to dismiss it as old people’s music.

“The original rappers were the ‘soneros’ (salsa vocalists), the rhymers – we invented that.”

The more melodic “Orun” with Valdés is a departure from Rosado’s “heavy metal” style of salsa.

In a recent video for the album, filmed at his Coral Springs home, Valdés had words of encouragement for Rosado.

“He has a great talent and a high level of composition and a tremendous swing on the piano – an incredible vibe,” says Valdés, smoking a cigar on his patio. “All I can say to Marlow is what [jazz composer] David Brubeck once said to me: ‘Marlow, never stop.’”

Valdés is one of Rosado’s idols.

“Chucho is like royalty. He was somebody that I saw as untouchable, as way out there, like a Miles Davis,” he says.

Rosado’s love affair with Latin tropical dance music has never waned. He grew up in Puerto Rico listening to his salsa heroes on the radio – piano giants like Eddie Palmieri, Larry Harlow and Papo Lucca. As a youngster, he taught himself to play the piano by listening to his favorite salsa records. 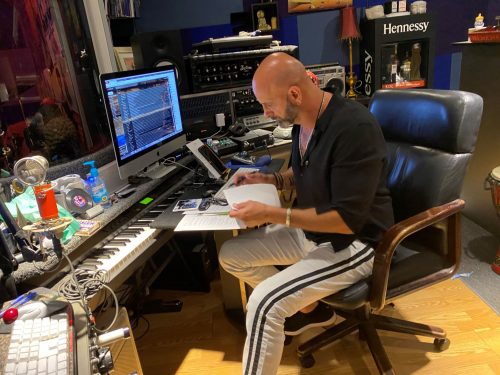 After moving to Miami at age 14, Rosado continued to nurture his interest in music. This led to a full scholarship at Florida Atlantic University in Boca Raton, where he graduated with a bachelor degree in music education and jazz composition.

After college, Rosado found a secure day job, as a music teacher at Marjory Stoneman Douglas Elementary School in southwest Miami-Dade County. He spent 10 years in the classroom – by then he had a wife and twin daughters – before taking a leap of faith to become a full-time musician. He has survived by learning to multi-task.

“I do everything: I’m a studio owner, I have a rehearsal hall, I’m a recording engineer, I’m an arranger, a pianist, I do events – like Christmas parties – I’m a songwriter and a producer,” Rosado says. “I stopped being [mostly] a piano player when I became a businessman.”

His many talents have helped him find steady work. Through a mutual friend, in the late ’90s, he met powerhouse songwriter-producer Desmond Child, whose hits include “Livin’ on a Prayer” and “Livin’ La Vida Loca.” Child, who also writes for and produces Latin artists, signed Rosado to his publishing company.

Through his association with Child, Rosado has written songs and produced albums for some of the biggest names in the Latin music industry, including fellow Puerto Rican artist Ricky Martin, Mexican rock star Alejandra Guzmán and Puerto Rican pop diva Yolandita Monge.

In 2015, Rosado won a Latin Songwriters Hall of Fame “La Musa” (The Muse) award, named after Child’s mother, Cuban composer Elena Casals. Child is a co-founder of the organization.

“Desmond has been an angel,” Rosado says. “He was the first person to sign me as a songwriter. He’s been a total force in my career.”

Rosado hopes more people will get to know his work. “Orun,” which is now available on all digital platforms, features all Rosado-written tracks except for the Rafael Hernández classic, “Capullito de Alelí,” which he performs with guest saxophonist Ed Calle.

Rosado says he feels a spiritual connection to the recording, which features a “babalao,” a Santeria priest, chanting a prayer on the title track.

“These are not just my latest records,” Rosado says. “They really mark a period in life that affected the entire planet. They are what kept me sane and kept me busy. They’re very special.”

For more information on Marlow Rosado and his music, check out his official website at Marlowrosado.com.