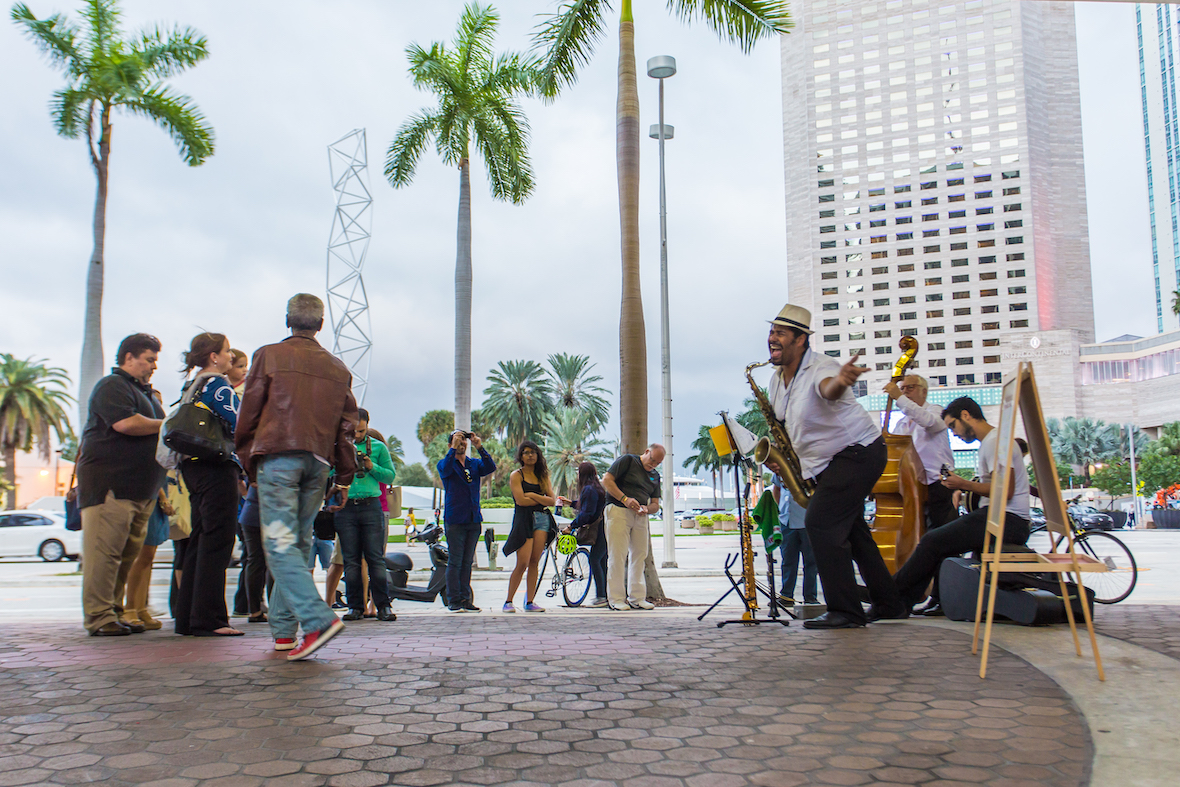 “Summer’s here, and the time is right for dancing in the street.” That classic Motown lyric was made popular by Martha and the Vandellas way back in 1964, but it has never been more relevant than it will be on Friday, June 21, when millions of people around the world are invited — no, urged — to gather outdoors and play music.

Why? It’s all part of Make Music Day, an international celebration of the summer solstice, the first day of summer and the longest day of the year. The event started in Paris in 1982 as the Fête de la Musique, and it’s since spread across the world. Here, it’s known as Make Music Miami, and it’s growing exponentially.

“This is a local edition of what is an international celebration delivering music to welcome summer in over a thousand cities around the world,” says Justin Trieger, who is a composer, sound designer and co-founder of Buskerfest Miami, the main organizer of Make Music Miami. “It’s been celebrated in Miami for almost 20 years. However, prior to our organization taking a leadership role two years ago, it was much more celebrated in pockets around the city. There were certain events happening in places like the Little Haiti Cultural Center and the French Embassy here. But the departure we’re taking from that is, we’re trying to make it a countywide call to action to invite everyone in Miami-Dade County to participate in some way, either as a performer, as someone hosting a performance or simply as an audience member.”

What used to be a few events scattered across the area has exploded into more than 100 artists performing at nearly 100 locations across Miami-Dade County, not to mention random pop-up performances that will happen organically.

“We would hope that every person in Miami-Dade County would have some sort of experience with music, whether they’re teaching it, playing it, listening to it, hosting it or whatever,” says Amy Cozette Trieger, who is a dancer, wife of Justin Trieger, and board treasurer of Buskerfest Miami. “A couple of years ago, we took the lead in expanding the Make Music celebration in Miami, and as part of that, we ourselves program a few highlight events just to make sure there’s a concentration of activations happening in key locations.”

One of those key locations is Lincoln Road, Miami Beach’s iconic walking mall, which will host more than 40 performances between 5 and 11 p.m. Friday. At 10 p.m. on the 1111 Stage Lincoln Road, jazz fans won’t want to miss the Trad305, a traditional jazz band presented by the Damian J Project. This band, led by woodwind master and vocalist Damian J Sanchez, brings a lively jolt of “hot jazz,” early, traditional jazz that is faster than the genres that came later.

“Hot jazz is considered to be jive, the bump, the stomp, the struts, the bounces and ragtime and Dixieland, back in the beginning of the 20th century, from 1904 until the rise of swing in the 1920s and ’30s and the big band sensations that came after,” Sanchez says. “It can get very fast and very frantic. Remember that jazz has two mothers: It has New Orleans and all the spirit and the soul, but it also has European structure in classical music, which is highly technical and very developed in speed and ability. So when you put them together, you have hot jazz — you have a musician who is technically advanced, such as Louis Armstrong, but with the soul and the flavor that is known as the New Orleans counterpart of this wonderful music.”

“It’s the music that is least heard in Miami,” says Sanchez, who is 37, was born in Cuba and grew up listening to romantic crooners such as Benny Moré and Xiomara Alfaro. “Let’s face it — there’s a lot of Latin people here, so one thing that is not usually heard is traditional jazz.”

Other cool happenings include the Art Deco Stage presented by the Miami Design Preservation League on Ninth Street and Ocean Drive, which features children’s workshops focusing on drums, dancing and ukulele, as well as performances by local bands; the Afro-French Night Jam at the North Beach Bandshell, featuring the French Horn Collective and Jude Papaloko Thegenus; and the Youth Music Summit, a daylong gathering of kids aged 14-18.

“The Youth Music Summit is a day of workshops that cover a variety of skills necessary to participate in music at a professional level,” Justin Trieger says. “We have space for about 100 kids, and they’ll spend a full day at the Lyric Theater in Overtown studying with a variety of people we’ve gathered together — a lot of local teaching artists, but also some pretty prominent guest faculty from New York and California. It’s a very informal but hopefully enriching learning experience where they get to work with people who they otherwise definitely would not, and also equally important, get a chance to meet and interact with each other, and that’s something we’re really excited about.”

For Sanchez, the whole day — and concept of Make Music Miami — is something to get excited about. “It’s a very big step in an evolutionary process for the city of Miami,” he says, “because I feel that we are behind in our cultural development as a society, musically speaking specifically, but artistically, as well. Over the last 10 years, Miami has seen a lot more art, whether it be visual or musical or any other medium, but it’s still not enough compared to Europe or any other part of the world that is putting art at the forefront.

“In Paris, they’ll have a huge festival where everybody is gonna play music,” he continues, “and we’re doing the same thing here: We’re putting ourselves on that pedestal, like Paris, Rome, London and the rest of the world in celebrating what can only be shared by humans: music. Art. This is what life is about, and I’m glad that we’re getting to enjoy it. I think it’s important, and I think it should be expanded upon maybe more than once a year. I know that’s a lot to ask for now, but let’s see how this one goes.”

For more information on Make Music Miami Day and how to participate, go to MakeMusicMiami.org.