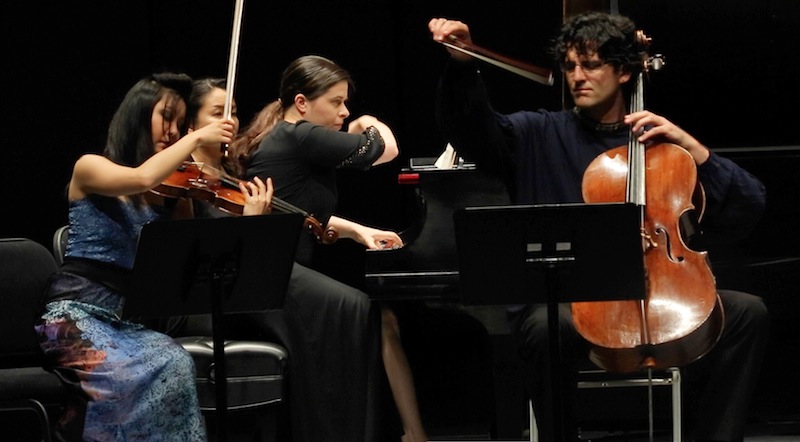 Many people look at an evening of chamber music as the kind of torment only to be suffered when trying to impress first dates. Marina Radiushina, artistic director of the Mainly Mozart Festival, knows this.

She explains that the innovations programmed into the festival’s finale on June 21 at the Arsht Center have been done with an eye to showing this potential audience member their torments are self-induced.

The centerpiece of the finale is a performance of Liszt’s, A Symphony to Dante’s Divine Comedy (or Dante Symphony for short). Radiushina, a celebrated pianist, will be performing that evening in a unique production arranged by Liszt himself for two pianos, a soloist, and chorus.

However, in the spirit of what Radiushina calls cross-inspiration, Miami City Ballet dancers will accompany the musicians performing an original choreography by MCB’s, Adrianna Pierce. Also, UM musicologist Frank Cooper will read passages from Dante’s work and noted filmmaker Ali Habashi will contextualize the symphony for the audience with short film segments.

In making this fusion, President of the Miami Chamber Music Society Mike Eidson sees the festival doing the sorts of things that Balanchine did with Stravinsky. With an expansive view of tree tops for backdrop, Eidson, in his Coral Gables office, describes an equally expansive view to organizing arts-related programming in South Florida.

“We are doing something new with these programs,” he explains. “We are setting up events where art and artists can act cross-inspirationally. The music, film, dance, literature that make up many of the programs in the festival — art and artists both — reflect on one another.”

This is Eidson’s third year with the Mainly Mozart Festival, a program he infused with new life when he hired Radiushina as its artistic director. Their first festival project mixed Paul Schonfield’s Café Music, with an original choreography by Pierce in the 2013 festival finale. Because of its success, this pairing of music and dance continues this year with another ambitious choreography by Pierce.

Talking with Pierce by phone, she admits that she loves the challenge of interpreting the Divine Comedy for dance. “What’s special to me about this is that it is so different than just setting out to make a piece that is strictly a ballet. I love being able to interpret the text and music to create work that is in harmony with the other production elements.”

With this goal, Pierce approached the three sections of the symphony — Inferno, Purgatorio and Magnificat — by creating physical motifs for Dante’s characters. For instance, in the Inferno, Dante frequently seeks comfort from his guide, Virgil, and in Pierce’s choreography dancers frequently take each other’s hands.

The characters Dante meets in Purgatory frequently belong to groups of souls in motion. In her choreography, Pierce parallels this by having her dancers mill about one another constantly as their group motions mimic the fugue-structure at the center of Liszt’s same-named movement.

Pierce placed circles at the center of the symphony’s final movement, the Magnificat, to recall the nine spheres of the cosmos traversed by Dante and Beatrice in the Paradiso. In the performance, circling dancers take as their center point soprano, Maria Aleida, who descends onstage and, accompanied by the Miami Children’s chorus, plays the part of Beatrice to the dancers’ Dante.

And perhaps Radiushina, Eidson, and Pierce collectively function a little like Virgil for us as well. Through innovative mixed-media programming, they guide audiences to experience classical music not as an empty ritual or as a chore but as an opportunity for inspiration, release, and ascent.