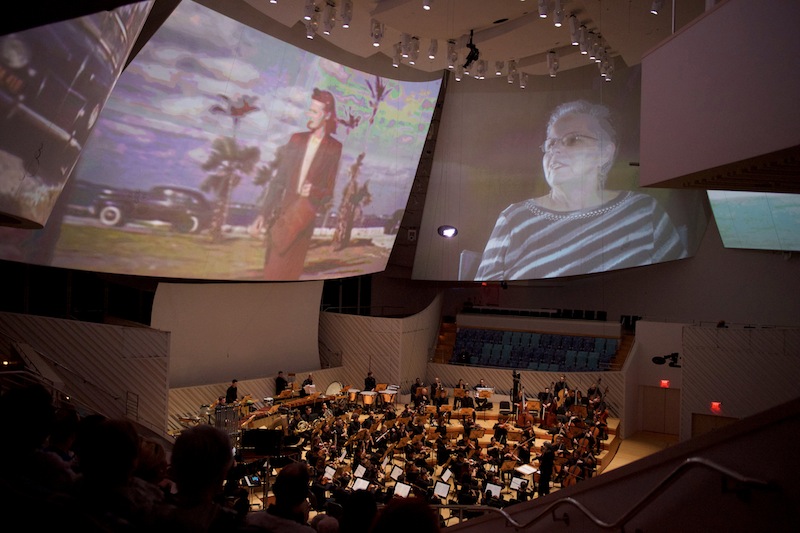 Performance Hall at New World Center was packed Saturday, Feb. 3 for the New Work program, which NWS conductor and artistic director Michael Tilson Thomas introduced as “one of the more adventurous programs” performed by the New World Symphony during their season.

Adventurous was an understatement for an out-of-the-box evening where music contended for pride of place with poetry, theater and cinema.

The program opened with selections from “Glimpse of the Big Picture,” a world premiere composed by Thomas. In the first selection – Whitsett Avenue: Sunset Soliloquy (1963) – Thomas described an experience he had as a young man practicing piano in his parent’s living room where he would feel his hands having different spirits. The left hand behaved lyrically like a cello solo; his right hand scampered like a fractured village over the keys.On occasion the two came together in a gentle duet.

Then began a piano solo played with nuance by New World fellow, John Wilson, where the keyboard and pianist’s hands were simultaneously projected on the main sail of the hall.

First Wilson laid down a muted, improvisational theme in the left hand that the right hand, discordant and percussive, interrupted.If the left hand nurtured and held to a melody line, the right hand eschewed melody altogether for rapid shifts and bursts of notes. Gradually the two hands reached an accord and a balanced, lush counterpoint emerged.

Auction Dream (1977) followed. In this spoken word piece Thomas described a dream he had while living in New York where he found himself at an auction where clients bid on odd objects like Millard Fillmore’s sled. Thomas’ dream narration supplemented by projections on the hall’s sails created the sensation of being in a Richard Linklater film. The narrative ends with Thomas the winner of a lot he didn’t bid on, owing a million dollars for a perfect blue sapphire holding “new frontiers, promise and desire.”

“Glimpse of the Big Picture” closed with Lope (2012), a piece inspired by Thomas’ walks with his dogs through a sensory rich environment. Five xylophones laid out rich cadences in this off-time piece whose surprising counterpoints performed like a transformational engine for rhythm, shifting from one complex sequence to the next.Inventive, Lope surprised from start to finish and was the highlight of Saturday’s program.

The evening’s second world premiere was a one-act play, “The Inherent Sadness of Low Lying Areas” by playwright by Christopher Hall with director Kel Haney, where we watch a retired poetry professor – Mitch, interpreted with solid comic timing by actor Joel Leffert – struggle with acute symptoms of PTSD.

For instance, the piece begins with Mitch asleep on stage and Lu transitioning between rich dark tones to blowing air into Mitch’s ear. She even stoops to occasionally whisper words to him, her actions visually deepening Mitch’s mental distress.

In what follows, Mitch cycles through a phalanx of coping routines from controlled breathing and jumping jacks to a mammoth bottle of medication, a haunting image given the current national opioid epidemic.

Later we meet Helga, played provocatively by June Ballinger and entirely believable as Mitch’s ex-wife. Shocked by his condition, Helga attempts to impress on Mitch how far he has sunk: “11:30 in the morning and you are in your bathrobe and drinking bourbon from a zip lock bag.”

We learn that Helga left Mitch because she could not handle his “orchestra,” his triggers that became so real to them both that Helga would order them pizzas.

At times the dialogue felt copied verbatim from the latest edition of the DSM.Still, “Inherent Sadness ” constructs Mitch’s prison so methodically that when Helga finally drags Mitch out into the park (and Mitch calms down enough to breath) the effect is cathartic for actor and audience both.

Then followed “Miami in Movements,” the orchestral product of Project 305 and a yearlong collaboration between composer Ted Hearne, filmmaker Jonathan David Kane and NWS that generated a city symphony based on video and sound recordings submitted by Miami residents.

The symphony opened to the first of six movements – Out of the swamp –and strong visuals of the Everglades, birds and wildlife warming to a South Florida sunrise. When “Miami in Movements”premiered in October the orchestra seemed challenged to blend the orchestral score with film elements that included cries of tropical birds, traffic horns on I-95, the clank and pound of downtown construction and musical sequences sourced from the city’s diverse musical traditions.

On Saturday, the effect was different – film elements and orchestra gelled powerfully.

Often Kane’s film-work was spectacular. Images of carnival costumes, piles of coconuts on Calle Ocho, and the sea itself as an ever-encroaching wall of water enveloped the hall.