Josemi Carmona, Javier Colina and a World of Music Beyond Flamenco 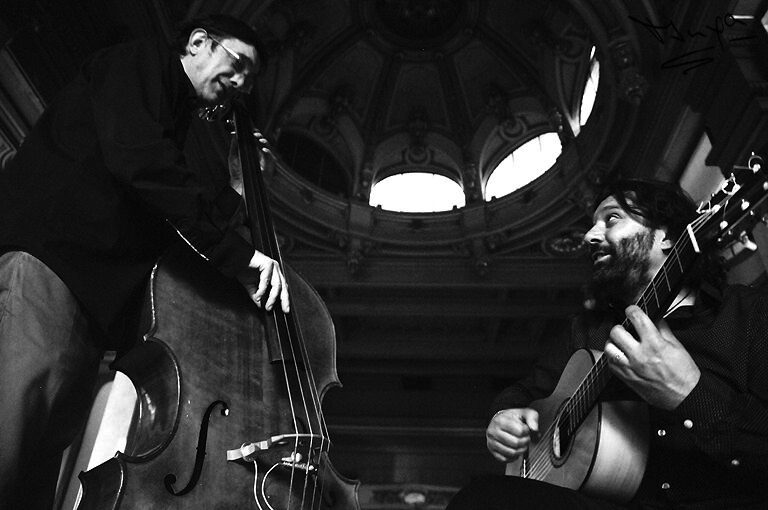 Guitarist, composer and producer Josemi Carmona embodies the spirit of Nuevo Flamenco. Rooted firmly in tradition, he has proven a restless, curious artist, ignoring the boundaries of genres and collaborating with musicians as disparate as jazz bassist Dave Holland, British Indian musician Nitin Sawhney, Norwegian pianist Bugge Wesseltoft and pop superstar Alejandro Sanz. He was 14 when he joined Ketama, the enormously successful flamenco pop group co-founded by his brother, Juan Carmona. And if an endorsement was still necessary, flamenco virtuoso Paco de Lucía called him “one of the guitarists who will define guitar playing in the 21st century.”

So it’s only fitting that Carmona and Javier Colina, one of the premier and most versatile bassists in Spain, as comfortable in jazz as in flamenco, open the two-concert Flamenco Eñe series at the intimate Carnival Studio Theater at the Arsht Center, Sunday at 7 p.m. The duo, with the addition of percussionist José Ruiz, will be performing music from their recently released album De Cerca (Up Close), which includes nods to flamenco, jazz and the Great Latin American Songbook.

“I love orthodox flamenco. I love to listen to a soleá, to a siguiriya [styles within flamenco]. But flamenco is the result of many fusions in that journey that brought the gypsies from India to the south of Spain, some through Europe, some through the North of Africa, and I´m not against any [musical mix] as long as it’s done from the heart,” says Carmona, reached by phone recently.

Jose Miguel Carmona was born in Madrid in 1971. He´s the son of the great guitarist Pepe Habichuela and the bailaora Amparo Bengala and, as such, part of one of the dynasties of flamenco. He was just 5 when he debuted on stage with the late Enrique Morente, one of the essential voices of flamenco, and as a teenager he toured with his father on the landmark Broadway revue “Flamenco Puro” in the mid 1980s.

He also co-founded the La Barberia del Sur, a flamenco pop group, and later joined Ketama, a group that blended flamenco with strains from pop and jazz, as well as salsa, Brazilian music and African music. The band dissolved in the early 2000s (although in recent statements Carmona called it a “hiatus”) and Carmona embarked on a solo career.

Playing with Colina, a superior player best known for his work with pianists Tete Montoliu, Bebo and Chucho Valdes and trumpeter and conguero Jerry González, De Cerca marks for Carmona a change in approach. This album was recorded “as if playing live, so the listener has the feeling of being up close.”

His interest in other genres and styles from around the world comes from growing up surrounded by music and having a father who was himself open minded and curious about the world beyond flamenco, he says.(Consider as a sample Habichela´s marvelous Yerbaguena, with the Bollywood Strings.)

“Even though my father is a flamenco guitarist through and through, I remember being a kid, in the living room, playing with my little toy cars and my father listening to [classic flamenco figures such as singers Pepe] Marchena o [Manolo] Caracol but also putting on Chick Corea, John Williams, Ravi Shankar or Gilberto Gil. I started playing when I was 4 years old and that was my musical education, open to other music. And then, later on we started to get a lot more information and I devoured it – Michael Jackson, Take Six, Stevie Wonder, Prince, you name it, so it’s not surprising that when the time comes to compose, it comes out.”

“I love jazz, I love pop, I love Indian music, Afro-Caribbean music and I love the mixes with flamenco,” he says. “For me music is about emotion. That’s what I aim to when I play; I want to move people, to have the hairs on their arms stand up. When that happens, that’s beautiful, that’s like saying ‘Ole’.”