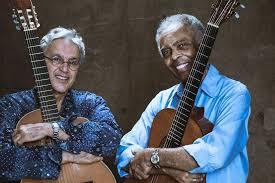 Caetano Veloso and Gilberto Gil: together in Miami, at last. Saturday’s performance at Bayfront Park is a dream come true for the Rhythm Foundation. “To have them together is kind of the holy grail for Brazil-ophiles,” said its director, Laura Quinlan. They are, she said, “kind of like the David Bowie and Bob Dylan, or Paul McCartney and John Lennon, of Latin America.”

Veloso and Gil, along with others including Veloso’s sister Maria Bethânia, Gal Costa, and Os Mutantes, were founders of Tropicalia. This 1960s artistic movement so disturbed Brazil’s military rulers that Veloso and Gil were arrested and jailed without charges in 1968 before going into exile for years in London.

They were able to return home and in 2003, Gil was named minister of culture in the cabinet of President Luiz Inácio Lula da Silva. And they kept working, recording scores of albums and touring – but never resting on their ’60s laurels.

“Neither of them ever became an oldies act,” Quinlan said. “They’ve always been cool.”

Gene de Souza, development director at Rhythm Foundation, mentioned a review of a recent tour stop in Salvador, Brazil, where the duo played a free show for about 150,000 on the beach. “This article I read was saying how not only was it hit after hit after hit, but it really traveled through the history of Brazilian music over the last 50 years.”

Veloso and Gil demonstrated their versatility with styles including reggae, samba, bossa nova, and more.

“Year after year we’ve presented each one, always supporting a new album,” said de Souza. “This is in many respects a greatest hits tour, so for them to choose a set list to play – in their press release it says how difficult it’s been.”

Saturday’s show will be just Veloso, Gil, and their acoustic guitars, playing their own and each other’s work.

This world tour was supposed to have wrapped up late last year, but the Rhythm Foundation kept inviting the pair. “They finally said yes, literally a couple of months ago,” de Souza said. “It’s kind of something that people have been wishing for for a long time.”

Quinlan is especially pleased for fans who have loved the pair over the years. “It’s important to note that they came onto the concert scene as part of a group,” she said. “To see them together again later in their career is really fulfilling for people who have followed their careers.”