In the Blood: James Blood Ulmer’s Jazz and Blues Odyssey 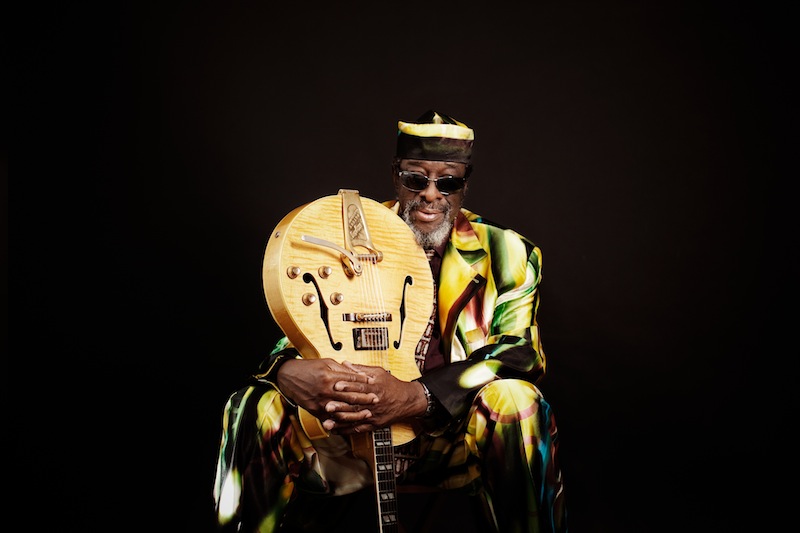 There’s a song James Blood Ulmer sings called “Jazz Is the Teacher, Funk is the Preacher.” If you bring in Mother Blues, along with the family hothead, Rock and Roll, you’ll have a better picture of the musical pedigree of this iconic guitar player and singer. With over 70 years performing behind him, Ulmer, who closes Tigertail Productions’ month-long “FIRE” festival this weekend, still has new revelations to make through his music.

There were detours down many side roads before Ulmer discovered jazz and, ultimately, the blues. During his childhood in tiny, segregated St. Matthews, South Carolina, the only music Ulmer’s father would allow in the house was gospel. “When I was coming up,” Ulmer said, “we didn’t have tape recorders and all that stuff to listen to music, we had the radio station. Only music I heard coming up [on the radio] was hillbilly music….My father didn’t let no record players in his house. They were church people. Church people didn’t go for blues, no rock and roll, none of that shit.”

There was, of course, live music in the way of gospel, and plenty of it. “Our entertainment was going to see our family…. On Saturday nights we would have these performances where everybody in the family would sing, dance, play and everyone would sit and listen.”

Rehearsal, whether of speeches or Sunday school songs, were a fact of life early on. “When I was six my father started a gospel group called the Southern Sons,” said Ulmer. They sang at area churches, and even traveled to open for major gospel groups like the Five Blind Boys of Alabama and the National Clouds of Joy. Ulmer has been in the music business ever since.

At 18, he left home and quickly began filling in the gaps in his musical education. His travels read like a road map of black American music in the 20th century: “South Carolina, it was gospel, Pittsburgh, it was doo wop and R&B, then I moved to Ohio and it was progressive jazz… I moved from there to Detroit. I went to actually study music…learning how to write music down on a piece of paper.”

It was when Ulmer finally found his way to New York City, where he still lives, that he played with jazz greats such as drummer Art Blakey and saxophonists like Joe Henderson and Ornette Coleman. It was Coleman who would have a profound influence on Ulmer’s evolving technique.

Coleman had pioneered a new system of playing that he called “harmolodics,” a cerebral form of new jazz that sought to free the style from traditional Western scales and harmonies. The story goes that Ulmer, having practiced chords incessantly and frustratingly at Coleman’s insistence, went to sleep and dreamt of how to change his guitar’s tuning in order to unlock the key to Coleman’s harmolodic system. When he awoke, he tuned his guitar with four strings on one note and the remaining two on another. Everything suddenly worked. The way Ulmer tunes, he explained, the guitar “becomes a four-stringed instrument with a two-stringed drone. You have to leave the Western sound of the guitar to get to that.”

Ulmer plucks his Gibson guitar with just the thumb of his right hand. He recounted long ago seeing Spanish classical guitarist Andrés Segovia in concert and being astonished at how Segovia plucked the strings with all five fingers. He made a vow to himself: “Now I had to make more sound with one finger than he did with five. I want to play with one finger and get more sound than Segovia. That tuning and my one finger, it’s almost there,” he laughed.

Indeed, as a jazz instrumentalist, Ulmer is considered an innovator and an iconoclast, taking the guitar to places it had never before been within the jazz idiom. It was only late in his career, however, at the suggestion of fellow guitarist Vernon Reid, that he eventually found his way around to the mother of all American roots music, the blues.

Ulmer sings and plays, and his voice is soulful, rich and ragged, with shades of Muddy Waters or Howling Wolf. His “Little Red Rooster” could give Willie Dixon a run for his money, and when Ulmer lets loose his demonic cackle on his own composition, “The Devil’s Got to Burn,” you can almost imagine the legendary Robert Johnson of “Crossroad Blues” fame rising from his grave and peering up at Ulmer from over his headstone.

As in the beginning, when Ulmer and his brother and friends would pile into the car and his father would take them on the road to gigs, or performing on a street corner in Pittsburgh to make his $6 weekly rent, so the practical aspects of the music business shape Ulmer’s career today. Just a man and his guitar is much more flexible than a whole jazz or funk ensemble. It is also enriching artistically: “Solo is putting everything you do in one basket. I am a solo blues man,” said Ulmer with satisfaction.

Even at 77, Ulmer doesn’t seem to spend a lot of time looking back. “We sing to survive,” he said, “we sing to keep a certain spirit going. You keep going, and then that spirit moves on and moves on.” Reflecting back on his gospel beginnings in St. Matthews, he said, “I would like to think that I have been moving forward since then.”