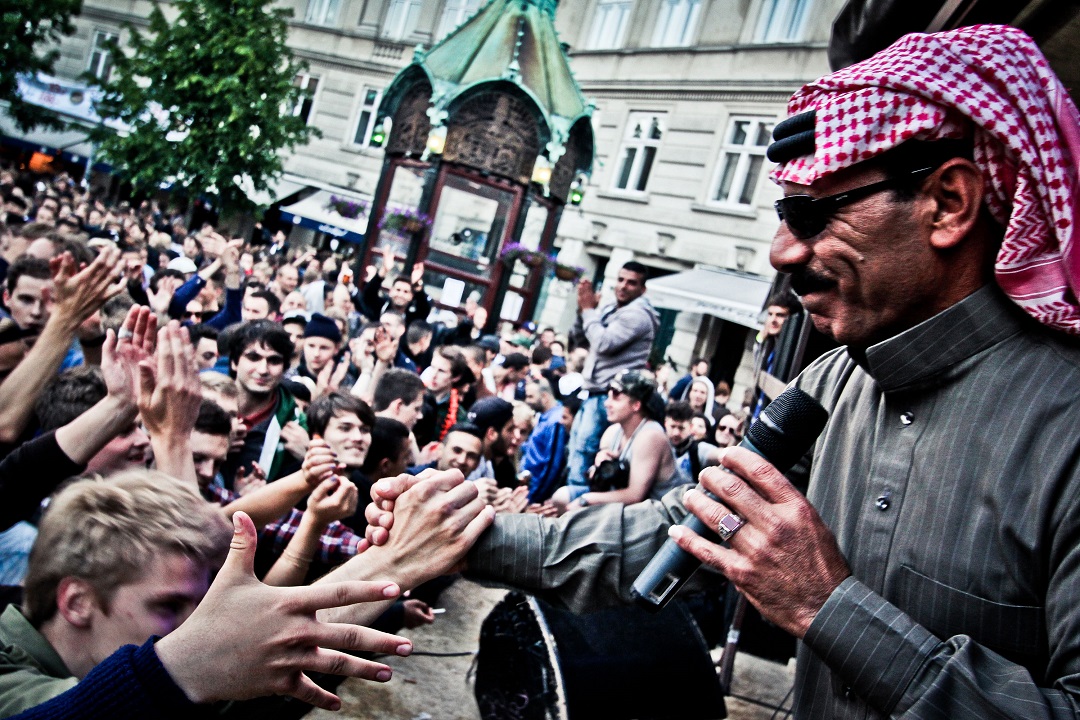 Omar Souleyman’s upcoming concert has been cancelled. According to one of the presenters, MDC Live Arts: “We are sorry to announce that, unfortunately, Omar Souleyman has had to cancel his upcoming U.S. performances due to visa complications beyond his control.” Let us hope that this is not a trend, similar to the cancelled visas of artists after 9-11, of prohibiting performers from certain areas of the world to engage and excite us to the art from their regions.

Some call him a “hill-billy.” Some call him “ a genius of trance.” He’s been dismissed as ‘kitsch” and lionized as among the most innovative adventurers in today’s electronic music scene. This is Omar Souleyman, he who over the last decade has enchanted Bjork, among other luminaries, and performed at venues as varied as Tennessee’s  Bonnaroo Music Festival, Central Park Summer Stage and the Nobel Peace Prize concert in Oslo. This Friday he will be appearing here in Miami for the first time at the North Beach Bandshell, presented by the Rhythm Foundation and MDC Live Arts.

Souleyman is from a dusty small town in what was a god-forsaken corner of Syria even before civil war made life there well-nigh impossible. But the sounds of Syria’s traditional folk-music, dabke, were everywhere, Souleyman’s mother’s milk.

Nobody is quite sure just how old this music is.  It has its roots in communal events, such as villagers coming together to stomp down hard on earthenware roofs to make them solid and tight. Good times they must have been since dabke remains the sound-track of much of daily life not only in Syria, but in Lebanon, Jordan and Palestine too. A great many weddings throughout the region feature the 4/4 foot- stomping, feel-good music and the line-dancing that accompanies it.

Souleyman began to sing at those weddings. Often a poet would be at his side, whispering words to add to the songs, every one about all the ins and outs of love, and desire. “Please god,” one of his songs implores, “I don’t want paradise; I just want my love.”

It was there amid these festivities that Souleyman began to experiment with the old rhythms, never, however, straying too far from them. His reputation grew for amping up the beloved rhythm, doing so hour after hour, as all present, young and old, male and female, danced together, shoulder to shoulder, one arm around another’s waist, feet synchronized, in something close to communal ecstasy.

Souleyman took his experiments one step further, substituting synthesizer and key-board player for musicians with traditional stringed, wind and percussive instruments. By 2005 his status as a rising star on the Arab music scene was confirmed with the release of “Khutaba,” (The Proposal) with its sensual Youtube video.

Meanwhile, more than one electronic music producer was looking to bring to electronic music the wider world beats Paul Simon, Peter Gabriel, David Byrne et al had brought to pop and rock years before. San Francisco’s avant-guard musician Mark Gergis had tracked the wedding singer down and was at work producing what would be the first of three Souleyman albums on the Sublime Frequencies Label.  In 2013 Souleyman’s first studio album was recorded with electronic music darling Four Tet. Not long after German electronic music duo Modeselektor brought Souleyman over to their Monkeytown label, calling him “the coolest guy on the planet.” DJ and producer Diplo’s label Mad Decent produced and released Souleyman’s most recent album, his 2017 “To Syria with Love.”

Many of the most recent songs are valentines to his lost home, for Souleyman now lives in exile in Turkey. He refuses to perform again in Syria until the killing stops. These songs are paeans to peace. Perhaps the most nonstop, high-energy danceable ones ever.