Guitarist José Almarcha and Lucía Ruibal, choreographer and flamenco dancer, in “Alejandra,” coming to the Miami-Dade County Auditorium on Saturday, Nov. 5 and Sunday, Nov. 6. (Photo courtesy of the artists)

José Almarcha’s “Alejandra” is a true labor of love from one of Spain’s most promising young composers for the guitar. “Alejandra” began as a malagueña, a single song dedicated to Almarcha’s then-living mother. When she died suddenly in 2015, Almarcha says he saw his world turn around.

“And then I thought, ‘Why just one song, why not an entire record?’ ” Almarcha recalls.

The song “Alejandra” grew into the album that was eventually shaped into the full-length concert being presented as an evening of music and dance in its United States debut on Saturday, Nov. 5 and Sunday, Nov. 6, at the Miami-Dade County Auditorium. It is part of Miami-based cultural incubator FUNDarte’s ongoing commitment to bringing cutting-edge flamenco to South Florida. 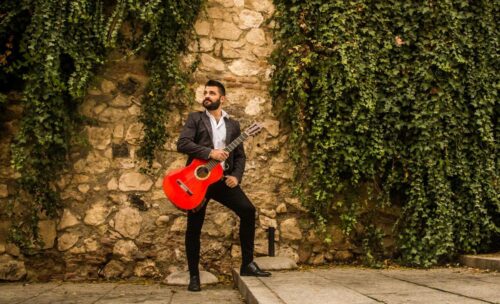 José Almarcha’s “Alejandra” is an homage to his native town, Tomelloso, in Castilla-La Mancha, and to the memory of his mother. (Photo courtesy of Alberto Romo)

“At some point I realized that when she was alive, I played in one way,” the guitarist explains.  “And when she died, everything changed—my way of playing as well as my way of composing.”

Almarcha has performed in more than 30 countries and played and written for some of the most innovative dancers in Spain—performers like Olga Pericet, Mariana Collado, and Karen Lugo.

He was in Miami last May with yet another leader of flamenco’s vanguard, Marco Flores. The two performed “Milonga, Sonata y Plata,” an exquisite and emotionally daring work of utter artistic abandon that married Almarcha’s music with Flores’s dance.

“Alejandra” strikes a different note, albeit an equally tender one. Firmly rooted in family and in place, the work references Tomelloso, the small city in Castilla-La Mancha where Almarcha grew up. An important grape-growing region, it is also home to many passionate flamenco fans. Almarcha explained that flamenco’s start there was in the vineyards: “The Andalusians would come up to work the fields, and later at night after work they would eat together and they would sing their songs.” Peñas, intimate neighborhood flamenco clubs, eventually sprung up around town, providing another artistic outlet for itinerate aficionados. 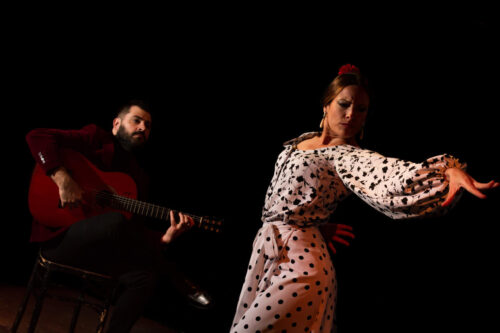 Choreographer and flamenco dancer Lucía Ruibal, the daughter of singer/songwriter and flamenco guitarist Javier Ruibal, with José Almarcha in “Alejandra.” (Photo courtesy of the artists)

The atmosphere was enough to ignite the interest of a budding adolescent guitar player. Once bitten by the flamenco bug, the art form became Almarcha’s all-consuming passion. “I became serious about the guitar at thirteen or fourteen,” he says, going on to receive his degree in the instrument from the prestigious Conservatory of Music in Cordoba.

The musician sees the guitar as one of Spain’s great gifts to world culture. Historically, the piano or the violin were classical instruments that were inaccessible to the common people, he says. Cheap and portable, the guitar played a critical role in bringing the joy of music to the masses.

“The guitar is the instrument that is most accessible to the pueblo, not just to people of a bit higher status. It brought culture and music to the working people… A family that might not have money to eat could pick up their guitar in the evening and forget their troubles for a while.” 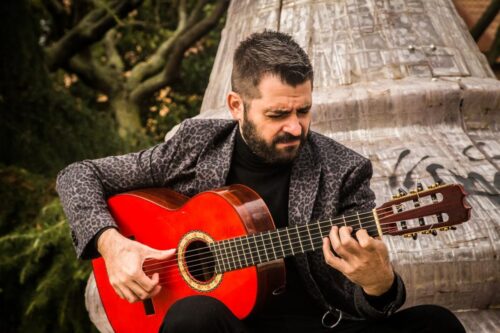 The song “Alejandra” by José Almarcha grew into the album that was eventually shaped into a full-length concert. (Photo courtesy of Alberto Romo)

Flamenco’s own DNA is woven of many musical influences: it blends Romani strands that stretch back to northern India with Moorish and Sephardic Jewish roots, as well as imprints from the many of the other groups that have made the Iberian Peninsula their home over the course of history. “There has always been such a variety of peoples in Spain  . . .Musically and culturally, all have left their mark—especially in flamenco,” says Almarcha.

Accompanying Almarcha in concert is a small cadre of first-class musicians. Among them is percussionist Epi Pacheco, something of a mad scientist whose bag of tricks includes instruments seldom heard in flamenco that nevertheless lend an earthy, grounded flavor to the music that feels perfect for the genre.

Singer Fabiola Santiago hails from a small town in Malaga, where her father saw to it that she was steeped in flamenco tradition from early childhood. Blessed with a powerful pair of lungs, she can sing traditional palos “por derecho,” as one can imagine they were heard when aficionados like Federico García Lorca or Manuel de Falla first fell in love with the form. Violin virtuoso, sound designer and actor Fernando Clemente, from Seville, rounds out the group. 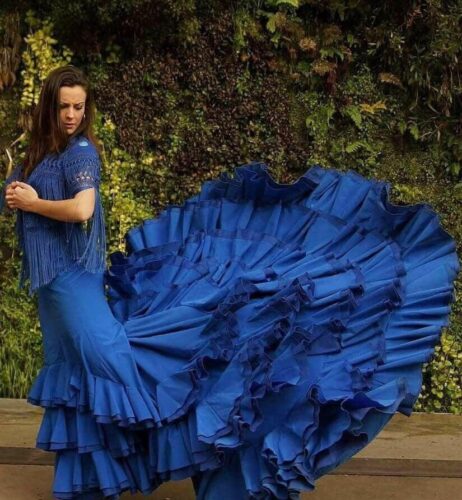 José Almarcha says Lucía Ruibal is one of the most musical dancers he has worked with. (Photo by Rafael Casado)

The concert also features Lucía Ruibal, the daughter of singer/songwriter and flamenco guitarist Javier Ruibal. Almarcha calls her one of the most musical dancers he has worked with. She also happens to be his romantic partner, and theirs is the other love story that permeates “Alejandra.” When Ruibal dances her farruca, Almarcha says, the stage is empty but for the two of them. “You see an incredible dialogue, a caring and a respect onstage. It is the most intimate moment in the show.”

Finally, he says, there are the fond memories of his hometown and region that permeate the piece. These are most strongly felt in a composition dedicated to that most celebrated of La Mancha’s fictional residents, Don Quixote. Many are convinced that the famous scene in which Alonso Quijano is “knighted” was inspired by a 16th century inn not far from Tomelloso, “la Venta de Borondo.” A bulerías by Almarcha imagines that scene, the protagonist’s inner struggle, and the newly minted “knight” finally setting off on the first of his adventures.

“In the Quixote,” Almarcha says, “there’s an ongoing battle between reality and Don Quixote’s imagination . . .I try to have my feet on the ground, but when you compose or create music, your imagination needs to fly, so maybe that’s when I become more quixotic. But I try to land on the ground.”