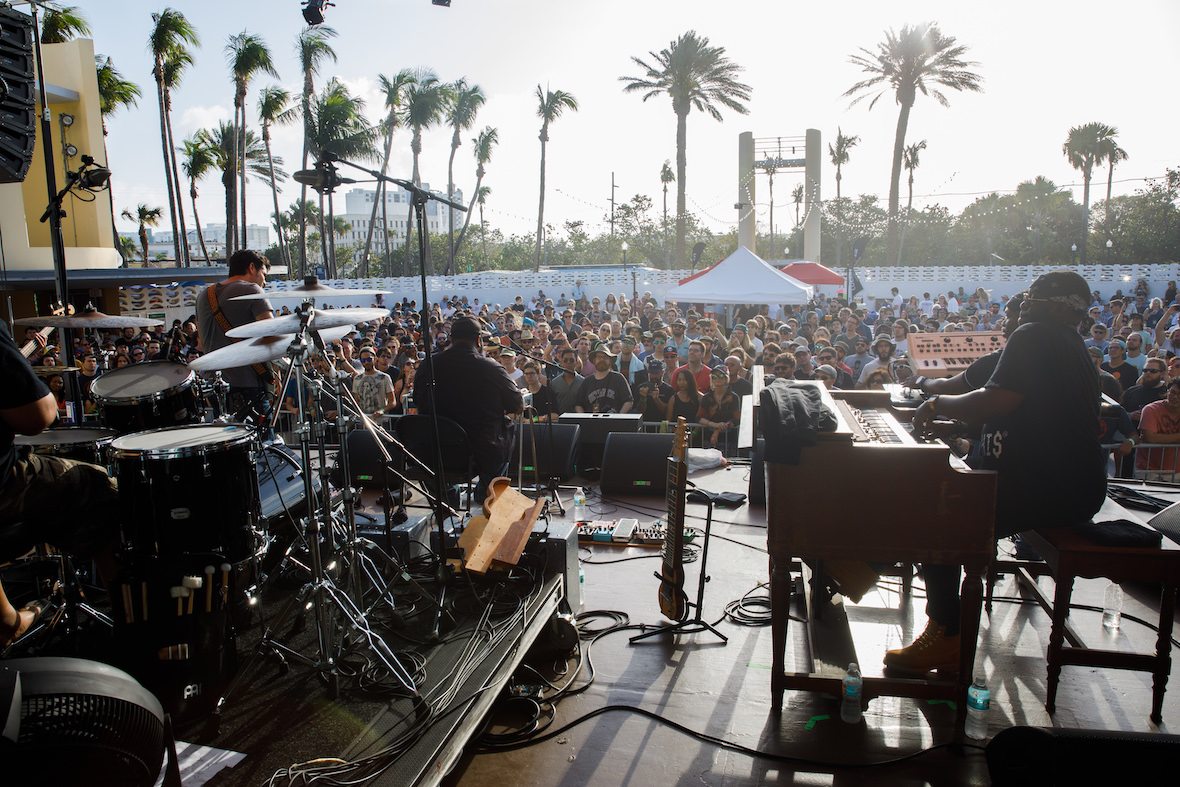 Outdoor music festivals are a complex mix of art feast, social event and business. Given its weather, inviting locations and geographic situation as an international crossroads, South Florida would seem an especially propitious setting. It has not been the case. South Florida’s recent music history is littered with ambitious projects that had short lives and inglorious deaths. All of which makes the GroundUp Music Festival at the historic North Beach Bandshell, celebrating its third annual edition Feb. 8-10, even more remarkable.

Set in the park area surrounding the Miami Beach bandshell, GroundUp features two stages and spaces in the adjacent UNIDAD Senior Center. The festival not only includes performances, but also talks, master classes and workshops. In previous editions, hammocks hung from palm trees, an open invitation to take a break, and the park accommodated several small stands selling clothing items and food. Because most of the artists stay through the weekend, impromptu collaborations tend to happen, and the low-key atmosphere favors scenes uncommon at this type of event — David Crosby casually wandering among the crowd to find a place from where to watch a performance; singer-guitarist Eliades Ochoa, of Buena Vista Social Club fame, sitting on a bench with his family, enjoying an ice cream while waiting for the music to resume.

In fact, curated mainly by Michael League, bassist, composer and mastermind behind Brooklyn, N.Y., band Snarky Puppy, the festival has served not only as a showcase for artists in Snarky Puppy’s artist-run label GroundUp Music, but also as a sort of open-air lab in a communal setting free of rock-star attitude. In addition to multiple performances by Snarky Puppy, this year’s lineup includes Crosby, Andrew Bird, Lalah Hathaway, Tank and the Bangas, and Susana Baca, among others.

The logic of the event has practical and creative objectives. “What we have created here is an unusual experience,” says Paul Lehr, executive director of GroundUp Music. “Unlike the typical festival in which the artists come, go to their trailer, play their set, go back to the trailer and they’re gone … we have them accessible all weekend long. We wanted to have more personal interaction … . It’s an experience that people really value, but that works for the artists, as well. What we want to do is foster as many relationships between artists and fans and audience as we can, and we hope that that, in turn, produces more great music.

At a time when selling recorded music has evaporated as a viable business, artists have had to turn to performing and touring.

“Your favorite artist on one of the streaming services puts .0007 cents in his pocket for each streaming. If you come to the festival and buy a T-shirt, that’s probably equivalent to the 10,000 streams or more,” Lehr says.

So Snarky Puppy and its label — which features established and emerging artists such as Crosby, guitarist Charlie Hunter, pedal steel and lap guitarist Roosevelt Collier and multi-instrumentalist Cory Henry — focused on live music and created “a sort of ‘GroundUp Music Presents,’ ” Lehr says, “where we’re acting more as curators and using the fan base that we’ve built up and the reputation for curation to try and help support those artists and sustain them.”

The approach intrigued James Quinlan, co-founder and chairman of the board of the Rhythm Foundation, the nonprofit presenting organization that since 2015 has managed the North Beach Bandshell.

“We heard about the possibility of Snarky Puppy coming to this market, and that alone was interesting to us,” Quinlan recalls. “We had been following them and were impressed with the artist-driven project that is Snarky Puppy. Also, they embraced so many of the artists and styles of music that we had been promoting over the years. When I heard the idea of pulling together an entire festival, it was like almost a dream come true. We have long relished the idea of artist-curated presentations.”

Lehr, a Miami resident and former Young Arts executive director, says from the outset that his intention “has always been that this would be an annual event in Miami.”

The core of the initial support for the festival has come from outside South Florida, however.

“The root of our success is that we have a strong community that really supports and follows us,” Lehr says. “About 60 percent of the entire population came from outside the state, and they came from 40 different states and 40 different countries. Now, I hope it really gets embraced by the community.”

The numbers did not go unnoticed, Quinlan says. Such a following “is just remarkable. And it really is something that thankfully the Miami Beach Visitor and Convention Authority understood as a high priority. This is the No. 1 cultural tourism effort in North Beach, and I think it has achieved the goals that we had set out. Now, part two of that is to reach the local audience.”

“He tried to establish jazz festivals here and failed,” Quinlan says, “and he said to me, ‘There’s a lot of blood on the streets down there from the festival market.’ He was joking, but the truth is that people have brought down formulas or created formulas here that might seem obvious and do work in other markets that don’t work here.”

What GroundUp Music is doing “is not an easy thing to pull off,” Quinlan adds. “But I’m hoping that this will be the year where the local public steps up and provides that extra maybe 15 or 20 percent of audience that I think is missing and make it an even more robust experience.”

The third annual GroundUp Festival, featuring Snarky Puppy, David Crosby, Lalah Hathaway, Andrew Bird, Susana Baca and others, will be presented by GroundUp Music and the Rhythm Foundation Feb. 8-10 at the North Beach Bandshell, 7275 Collins Ave., in Miami Beach. Tickets cost $85 per day or $225 for a three-day pass.  Call the Rhythm Foundation at 305-672-5202 or go to Festival.GroundUpMusic.net.