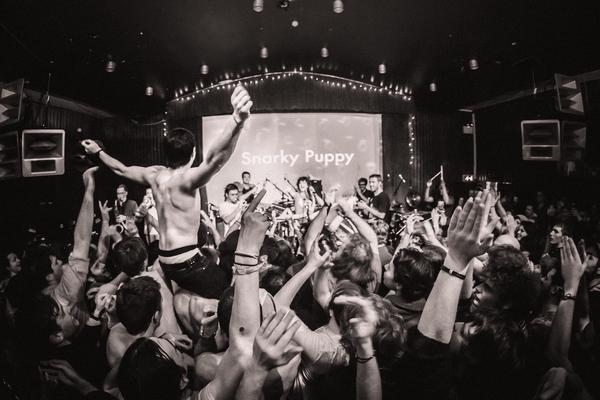 Florida in February has its own magic: gorgeous light, cooler temperatures, clear skies and soft sea breezes. Now, imagine those breezes carrying the moaning strains of Esperanza Spalding’s bass fiddle or of David Crosby’s rich baritone. You might have to strap yourself down to keep from floating off on a beauty-induced high.

Debuting Friday through Sunday at the North Beach Bandshell, the GroundUP Festival isn’t only about great concerts, it’s also about making real connections. Executive director Paul Lehr explained: “One of the important characteristics in creating the festival was not to have the traditional barrier between you and the artist. We’ve asked artists to have small workshops and master classes. There’s going to be a song-writing workshop, you can join a group to sing acapella by the sea with some of the singers, there will be a drum circle on the sand you can sit in on. It’s a way for the audience to interact on a more personal level with the performers…we want fans to have access to the artists.”

The festival is the brainchild of Michael League, the young bass player and composer who heads up the GRAMMY award-winning group Snarky Puppy, which is also headlining the festival. If you aren’t familiar with the group, don’t let the weird moniker fool you—no dogs were involved in the making of any of their recordings, nor are they an alternative band from someone’s garage in Portland. Born in a dorm room at the University of North Texas when League was a freshman, Snarky Puppy is now a Brooklyn fixture with a worldwide web of concerts and a rabidly loyal fan base that is willing to fork over big travel bucks to hear their favorite band. “The response has been overwhelming,” says Lehr. “Fifty percent or more of the audience is coming from either out of state or out of the country. People have commented to me that this is like the Art Basel for music.”

Often labeled a “jazz fusion” group, Puppy draws from a broad array of sources to create its signature sound, a sonic melting pot cooked up by versatile players who are not afraid to mess around with unconventional ways of approaching their instruments. “They play classical, jazz—they’re genre defying,” explains Lehr. “What they really are is musicians’ musicians. The band is all about musicality. Who do we want to play with? We want someone who is really incredible musically.”

League, the crew’s ringleader, is a self-confessed workaholic who spends most of his time either in the studio or on the road. The band has toured so much, in fact, that League recently went for two years without a physical address. After their Miami Beach performances they will head to the Kennedy Center, then on to dates all over Europe, finishing up finally in August at the—pardon the pun—august Newport Jazz Festival.

The Miami Beach festival isn’t only about jazz, however. David Crosby, a frequent collaborator with League, brings folk rock of the highest pedigree. Unlike many septuagenarians of the psychedelic era, his voice is still lustrous, as mellow and warm as oak-aged single malt whiskey. He and League recently co-wrote Lighthouse (2016), an acoustic album that, through a practically supersonic creative burst, they were able to complete in only 12 days.

Also performing, both onstage and in the sand, will be conga drummer Pedrito Martínez. If Crosby still looks more or less like the hippy he once was, Cuban-born Martinez looks like a rapper, is built like an Olympian, and plays like a possessed Santero priest. His hands move like lightening on his four-conga set and his broad, body builder shoulders back them up so that his playing appear completely effortless

Sitting in with many of the bands throughout the weekend will be Obama’s first lady of jazz, Esperanza Spalding. The former president chose the brilliant, beautiful, biracial Spalding to be his one guest musician during the Nobel Peace Prize ceremonies in Stockholm. The multiple GRAMMY winner vocalist and bass player will also do her own sets and is rumored to have a “surprise” in store for festival audiences.

With such an illustrious lineup, organizers are taking extra precautions to ensure these virtuoso musicians sound their best: “The North Beach Bandshell has a great sound system,” says Lehr, “but we are flying in the sound engineers so that we can guarantee that we’ll have great acoustics.” From the workshops to the after parties to the festival, every aspect of the event is curated. They even were able to convince James Beard Foundation honoree Michelle Bernstein to do all of the food.

“We want this be the unfestival festival,” explains Lehr. “Not crammed with people, not festival food, just great music and a great atmosphere. We hope that it will become a part of the social and cultural fabric of Miami Beach for many years to come.”