Grammy-nominated jazz musician Raul Midón has a message for you

Grammy-nominated jazz singer and guitarist Raul Midón was recognized as the University of Miami Frost School of Music’s Alumnus of the Year in 2019. (Photo courtesy of Samuel Prather)

Fed up with being cooped up in your home? Raul Midón has a message for you that might change your perspective: Embrace it and go with the flow.

“This is a time for us to slow down and reflect,” says the Grammy-nominated jazz singer and guitarist, who graduated from the University of Miami’s Frost School of Music in 1990. “We’re always complaining about not having enough time. Well, now we’ve got time.”

Midón is no stranger to overcoming obstacles. Born in New Mexico in 1966, he was a premature baby, and he and twin brother Marco lost their sight permanently after incubator complications. Midón’s parents never let his blindness limit his goals and dreams.

“From very young, I was told that I could do anything I wanted to do. And it’s the same way I think about this [coronavirus] situation,” says Midón, who today lives in Columbia, Md., just outside Baltimore. “As much as it sucks for us, especially those of us who are performers, there is no situation that doesn’t present some kind of an opportunity. The only question is, are you open to it?”

Midón will join the ranks of musicians performing via livestream. He will appear at 5:15 p.m. May 2 through Bandsintown.com.

Midón’s list of musical accomplishments is extraordinary. He released his 11th studio album, “The Mirror,” on March 13, which continues the artist’s dedication to eclecticism by branching beyond jazz into folk, blues, rock, reggae, R&B, funk, soul, Latin pop, acoustic ballads and even spoken-word. His 2018 album, “If You Really Want,” features the Dutch Metropole Orchestra and conductor Vince Mendoza.

And he was recognized as the Frost School of Music’s Alumnus of the Year in 2019. Midón has very fond memories of his time in Coral Gables.

“I’ve always looked on that period as a good period,” he says. “I really enjoyed being in school, and I learned a lot and met a lot of people. What they talk about, the college experience – now, they’re talking about replacing that, but you’re never gonna replace that online. Because what I got wasn’t just information but networking, and some of those people I still work with today.”

Midón is proud of his collaborations, especially his version of Stevie Wonder’s hit, “I Just Called to Say I Love You,” on Herbie Hancock’s album “Possibilities,” and the sultry Spanish ballad, “Mi Amigo Cubano,” with Bill Withers.

“My goodness, I got to write with Bill Withers. Not a whole lot of people did that,” he says.

But it’s Midón’s 2017 album, “Bad Ass and Blind,” that truly captures the essence of this fast-fingered, vocally elastic artist. Its musicianship is virtuosic as always, but its title is slightly tongue-in-cheek and reveals a chip that’s been on Midón’s shoulder for years. 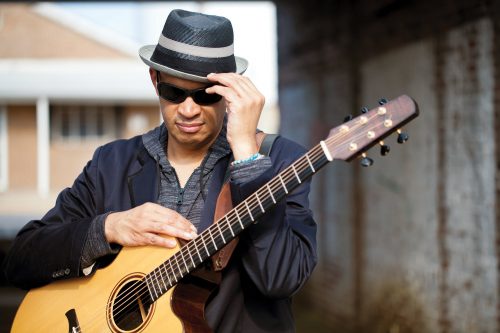 Raul Midón will be performing via livestream at 5:15 p.m. May 2. (Photo courtesy of Blair Allen)

“The title came out of a little bit of frustration with answering questions in interviews. People would always ask me the same things about working with Stevie Wonder and stuff. And that’s cool, but I wanted to bring attention to the fact that I engineered and produced my last five albums myself, as a blind person. So the title is a perfect set-up for that,” he says.

Doing the production himself is no small task for Midón, as he requires customized software.

“I use a digital audio workstation like a lot of other people, but it has scripts that are written to re-map some of the functions so that they’re all keyboard commands,” he says. “The things that you would do with a mouse normally, you do with a key. Now, given the complexity of a digital audio workstation, it’s a hell of a lot of work to make everything that you need keyboard-triggered.”

The title track from “Bad Ass and Blind” contains an unexpected passage that is truly mind-boggling. While executing a funky chord progression on guitar, Midón breaks off into a 30-second rap that is as lyrically clever as it is rhythmically intricate. And being able to perform both at the same time is impressive. So how does he do it?

“It always starts in the studio, and then I learn how to do it live,” he says, with a laugh. “When I originally did the song, I did them separately, and then I just practiced until I could do it live. It starts with a concept, and then sometimes I have to catch up a little bit.”

Rap isn’t Midón’s only surprising vocal talent. He’s also quite gifted at “mouth trumpet,” a skill he discovered and developed while in college, and which he uses to harmonize with the notes he plays on the guitar.

“When I first went to the University of Miami, there was a trumpet player in Miami named Pete Minger. He was on the scene in ’84, ’85, ’86, and he was a member of the [Count] Basie band and he had great technique, and he played a lot of flugelhorn,” Midón recalls. “That sound was very attractive to me, because it’s a slightly warmer sound than a trumpet. I was just starting to study jazz, and I just basically started to take all of the things that I learned that I was practicing on guitar, and practiced them vocally, and the trumpet was kind of a way to get that articulation. I wasn’t [scatting], you know, ‘Scoo-bla-doo-ba-dee-n’day!’ Which is cool, but I just wanted to do something else.

“All of that is sort of musical geekdom that I’ve always been interested in, just taking vocal lines that are normally considered not singable, or very difficult to sing, and singing them.”

Check out Midón singing and playing guitar in his numerous videos on YouTube (especially his live NPR Music Tiny Desk Concert). You also can tune in to his upcoming livestream at 5:15 p.m. May 2 through Bandsintown.com.