Global CubaFest: Pavel Urkiza and a World of Musical Connections 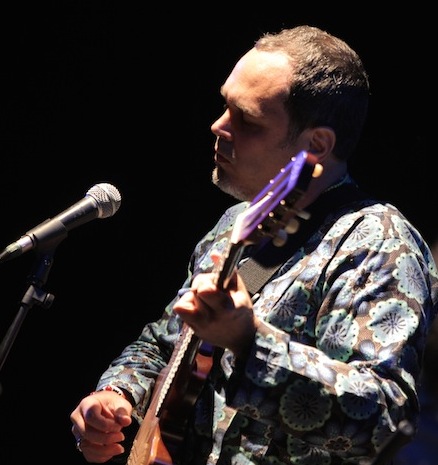 If someone knows about displacement, about life at a crossroads and the impact of carrying one’s culture from place to place, it might well be Cuban singer and songwriter Pavel Urkiza. Best known for his work as part of the 1990s duo Gema y Pavel, Urkiza was born in Ukraine (a geographic quirk, his young parents had gone to study in what was then the Soviet Union), raised in Havana and, for more than two decades, a resident of Madrid. He is now living near Washington, D.C.

One lesson learned from those experiences, he says, is that what connects us is much deeper and more powerful than our differences, and it’s all there for us to hear, in our music.

That is the subject of La Ruta de las Almas (The Road of the Souls) an expansive, ambitious project, five years in the making, documented on disc and film. Recorded and shot in various global locations and featuring more than 50 musicians from disparate parts of the world, including Cuba and Spain but also Iran, Morocco and Israel, The Road of the Souls brings into focus a web of cultural connections underlying the Ibero American world. It’s a map of a continuing process of recombining, adapting and reinventing.

The music documentary The Road of the Souls will have its United States premiere at the Centro Cultural Español (Spanish Cultural Center) Friday at 7:00 p.m. And Urkiza will play music from The Road of the Souls as part of the Global CubaFest 2016, presented by FUNDarte and Miami Light Project at Miami-Dade County Auditorium, Saturday at 8 p.m.

Urkiza spoke about The Road of the Souls, the musical discoveries that came researching the project and how this is a continuation of his work with Gema y Pavel.

Was there a particular event or encounter that sparked The Road of the Souls?

No. This had been cooking slowly, over a long time and, thinking back, I think it was already in my mind back when I was living in Cuba. But it really came into focus in Jerusalem in 2011. I went to Israel with Gema for some concerts, and I remember walking in some old streets in Jerusalem and thinking that it was like walking in any old city of Spain, it was like being in Granada or Cordoba. There’s a moment in the documentary that says: “I come from Cuba, a divided country, with brothers that have hated each other,” and I emigrated to Spain, also a country divided by a Civil War in which brothers killed each other — and there I was, in Jerusalem, in a land where brothers are fighting, hating each other.

So this began as a need to express a spiritual idea: it has to do with love and the fact that we are much closer [to each other] than we think. It doesn’t matter if you are Muslim, Jewish or Christian, communist or capitalist, what is important is what connects us all at a very deep level and transcends culture …. that something speaks to me in music. Music is the natural religion of human beings.

And this, in turn, led to the musicological aspect of the project?

Yes. After living in Spain for 22 years and having learned about certain musical traditions such as flamenco, Sephardic and Andalusian music and Romance songs, one starts to hear connections to the music of Cuba, Argentina, Colombia or Peru. It’s in the rhythms, in the melodies, in the way of singing. But then, as you follow the threads, they take you to North Africa, Sub-Saharan Africa and all the way to Persia (Iran).

And you come to realize that the Cuban rumba is not just African but it has many Spanish and gypsy elements; the clave [the five beat rhythmic pattern underlying salsa and much of Afro-Cuban music] and the cinquillo [ five note figure typical in danzón] come from the Middle East. That´s the subject of The Road of the Souls.

How does this project relate to your previous work with Gema y Pavel, which is what people know best?

I believe that if you go back and check recordings such as Síntomas de Fe (1999) and Art Bembé (2003) you can already hear influences from various Latin American styles, so little by little we arrive to this recording, which is a tribute to Ibero-American music. I call it Ibero-American World Music.

The music documentary will be shown at the Centro Cultural Español on Friday and you will perform at CubaFest on Saturday, what can the audiences expect in each event?

The film documents the recording of the album. During the process, I interviewed all the musicians — we have Israelis, Spaniards, Peruvians, Colombians, Iranians, Cubans, Argentines — and I basically ask them three questions: “What does The Road of the Souls suggest to you?,” “What does music mean to you?” and “What did they sing to you when you were a kid?”

On Saturday I will be performing with my band featuring some special guests such as Eliseo Parra, África Gallego and Javier Ruibal. We’ll do some music from The Road of the Souls and also some songs from my earlier repertoire.

Why the title The Road of the Souls?

The Road of the Souls alludes to The Silk Road and The Spice Routes — except that this is not about something tangible, it’s a spiritual subject. And it’s not something you can look at from a political or geographical perspective, it’s deeper than that. We are all connected. [When talking about Ibero American music] I used to say “From Rio Bravo to Patagonia,” now I say “From Persia to Patagonia.”