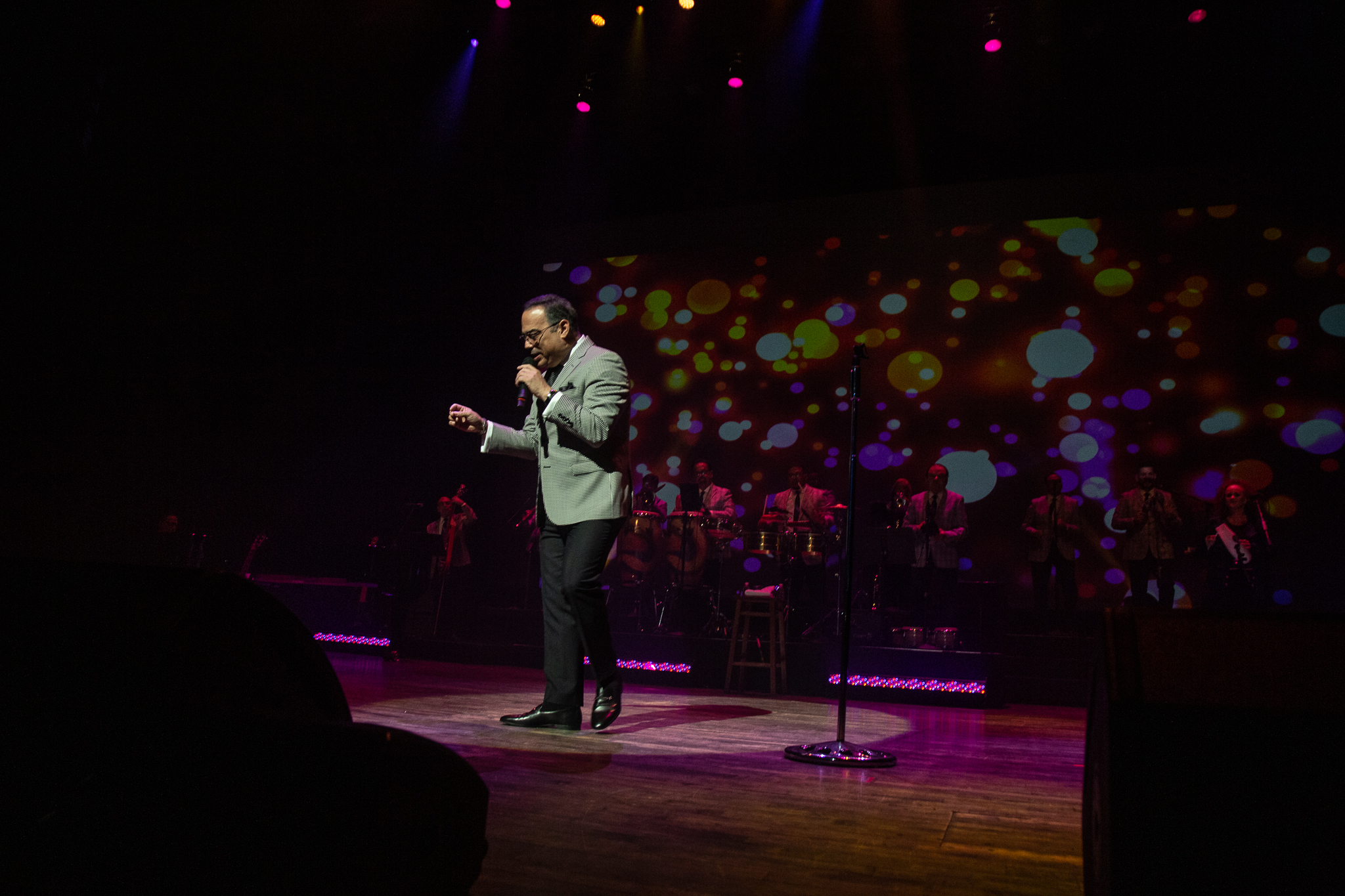 Gilberto Santa Rosa has long lived up to his moniker “El caballero de la salsa,” ever the gentleman onstage and off-. And lately, he’s been keeping good company.

His latest album, “En Buena Compañía,” is an eclectic mix of Santa Rosa’s romantic style with harder-edge salsa, and was nominated this week for a Billboard Latin Music Award for Best Tropical Album of the Year. The album also marks the first time the Puerto Rican crooner has recorded with Andy Montañez, a salsa giant and ex-lead singer of El Gran Combo, another salsa institution. The two sing a duet on the track “Cuando a Ti te Pase (When It Happens to You).”

“The phrase may sound like a cliché, but it really was a dream come true,” Santa Rosa says from his home in San Juan, Puerto Rico, during a break in his “Amor de los Amores” tour, which arrives Saturday, Feb. 16, at the James L Knight Center in Miami. “I learned to sing with Andy and Pellín [the late singer Pedro “Pellín” Rodriguez, also from El Gran Combo]. They were my first inspirations.”

Santa Rosa has built a career based on his elegant vocal style and persona. When commercial salsa began to decline in the 1980s, Santa Rosa’s career took off. The public embraced his mellow, romantic style, and his albums turned platinum and gold. In 2016, he set a Guinness World Record for having the most No. 1 spots on the Billboard Tropical Albums Chart. He boasts a Grammy and four Latin Grammys, and was the first salsa artist invited to perform at Carnegie Hall. Last year, Santa Rosa was honored in an HBO Latino special on his 40 years in music.

The 57-year-old musician is now investing his artistic capital to promote traditional big-band salsa, where his roots lie. In July 2018, he visited Cuba, the birthplace of tropical-dance rhythms including the son, rumba and guaguancó.

“We all know that Cuba is the root of what we call salsa,” Santa Rosa explains. “There are many people like me who have great respect for Cuban music and for those musicians who paved the way for the rest of us.”

Accompanied by his buddy, Cuban singer Issac Delgado, Santa Rosa performed his first open-air concert along Havana’s famed Malecón seawall. From his makeshift stage, he looked out at a crowd that seemed as vast as the ocean.

“It was hard to see where it ended. People turned on their cell phones so that I could see they were there,” he recalls. “It was an unforgettable experience, something very special.”

In the not-too-distant past, visiting Cuba would have gotten a Latin artist such as Santa Rosa blacklisted in Miami. But his Cuban performance has barely registered in South Florida, a sign that times have changed, the singer says.

“Things happen at the right time, and I’m grateful there have been no negative repercussions against me. I’ve been back to Miami [since going to Cuba], and the reaction has been very positive,” he says.

Santa Rosa may have taken an even bigger risk with “En Buena Compañía,” his first independent album and recorded with La Sonora Sanjuanera, a relatively unknown salsa band from Puerto Rico.

“I’m not going outside my zone. No one is going to say, ‘What’s Gilberto doing there?’ ” Santa Rosa says. “You get a taste of traditional salsa with some boleros, but this is essentially a dance album.”

The recording has also allowed Santa Rosa to show off his improvisational “sonero” chops, a throwback to his formative years in the 1970s as a young salsa vocalist with the Tommy Olivencia and Willy Rosario bands.

It’s also meant exposure for La Sonora Sanjuanera, a band that had been around for 20 years with only two recordings to its name. That is, until Santa Rosa came along.

“I first heard Victor’s group at a party, and like a lot of talent that I see, I wondered why they could not gain a wider audience, an opportunity to go beyond their surroundings,” Santa Rosa says. “I hope this album serves that purpose, that more people get to know them. It’s not going to happen overnight, but I’m happy to do my part to contribute to their development.”

Santa Rosa will do more than his part to promote “En Buena Compañía” at his concert Saturday. He plans to perform several tracks from the album, which includes “Amor de los Amores,” along with his older hits and “a few surprises.” He also plans to have hard copies available for sale after the concert. Until recently, “En Buena Compañía” was available only on digital platforms.

“I would love for people to get to know the album, and if they fall in love with it, take it home,” he says.

Santa Rosa hopes his efforts serve to honor salsa’s past, but also help to ensure its future.

“Sometimes, by going back to the classics, you encounter something very refreshing,” he says. “Sometimes, we look for the answer in the year 3000, in electronic sounds and in technology, when the answer is in the ’60s.

“It doesn’t mean that music doesn’t evolve,” he adds. “It does mean that our music has elements that are still very viable.”