Game On: Animation and Gaming Complex Opens at MDC 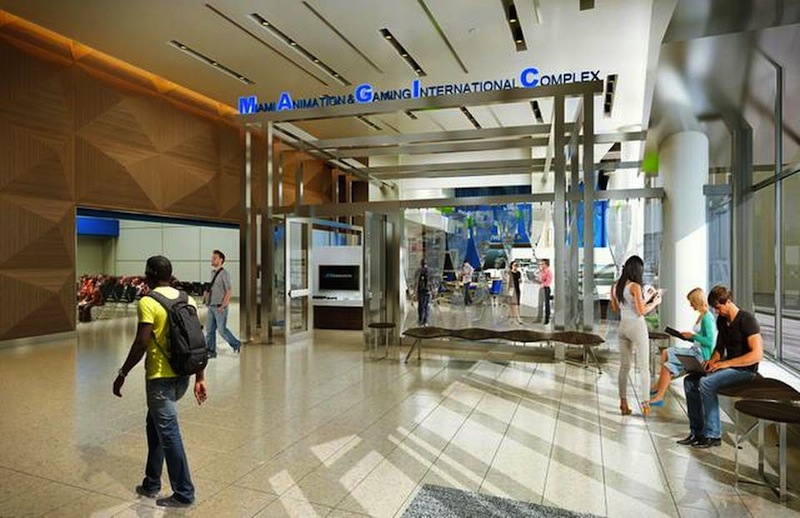 Miami as a hub for the animation industry? Mauricio Ferrazza thinks so, which is why the Aug. 21 grand opening of Miami Dade College’s Miami Animation & Gaming International Complex (M.A.G.I.C.) on the college’s Wolfson campus is a turning point. When 80 students begin classes as M.A.G.I.C. officially opens on Aug. 24, they’ll be enrolled in an associate of science degree program that Ferrazza, MDC’s Miami Animation & Game Development Department Chairperson, who developed the curriculum, says will get them “industry ready” to be video game developers and animators.

The need in Miami for a workforce with skills to be animators and game developers continues to grow as more high-tech firms take up residence here. According to Ferrazza, about 20 animation and gaming studios have opened their doors in Miami in the past five years.

In May of 2014, Shiver Entertainment, a video game development firm led by industry veteran John Schappert, moved into office space in Sunset Place. The industry sat up and took notice when the game startup opened in Miami, most notably because of Schappert’s legendary status as a video game developer for his involvement in the hugely successful Madden NFL series.

One of the first videogame companies to enter the Miami market was SkyJoy Interactive, located in Brickell, in 2013. Its co-founders, Abdulhady “Abboudi” Taher, and brothers Miguel and Alex Portilla, have been vocal about wanting to be instrumental in making Miami a gaming capital city. “[Miami] is truly an international city with so much rich culture; there is no reason this shouldn’t be a hot bed for video development,” said Miguel Portilla.

With hopes hinging on Miami becoming a southeast version of Silicon Valley, demand is what’s creating the appeal for investors and top-tier techies. While China holds the No. 1 spot for the most consumers of video games, South America is No. 2. “There’s an interest from these types of companies opening here because of Miami’s geographic location and the access to South America,” said Ferrazza.

Workforce demand is what justified the 9,000-square-foot complex and the creation of a new curriculum at the state-funded educational facility. “If the jobs weren’t here, we wouldn’t be able to create a new program,” said Ferrazza. Out of 1,000 jobs in the animation and gaming industry in Miami, Ferrazza commented that research showed that 60 to 70 percent were recruited from outside the state of Florida “because we’re not producing the workforce here in Miami.” Workers from New York, Texas, and California make up the bulk, right now, of industry professionals working in the trade in Miami. “That’s about to change,” said Ferrazza.

Yet it’s not just demand for professionals with skills to develop and program video games and create cartoons. There is an essential need for those who are proficient in 3-D animation for architecture, forensics, and health care. Educational video games are becoming must-have teaching tools in school curricula to help promote learning. “Kids are learning biology, physics, chemistry and other subjects through video games, which creates even more opportunity for students graduating with these skills,” said Ferrazza.

Students leave the program at Miami-Dade College with a two year Associate in Science degree in Computer Programming and Analysis with concentrations in Animation and Game Art, or Game Development and Design. “The education gives them all the tools they need to start working,” according to Ferrazza. “This is applied learning in a hands-on program where they will be using industry standard equipment.” The chairperson said the complex mimics a real studio, so that when a graduated student starts their first job, the transition from M.A.G.I.C. to a professional studio should be seamless.

The Miami Dade Gaming Development curriculum’s Capstone program has a mentorship component built in. “We’re bringing the industry to them,” said Ferrazza. Professionals from Walt Disney Animation, the Cartoon Network, The Third Floor studios, Nickelodeon and Activision will work with students through in-class and video conferencing mentorships. “These create networking opportunities. The professionals will watch how they work in a team, how they interact, how they problem solve. The mentorship acts in several layers,” said Ferrazza.

Miami Dade College’s Gaming Development program was an outgrowth of the annual MIA Animation Conference and Festival, which was held on the Wolfson campus for the last two years. Ferrazza founded the festival in 2009, which this year will be held inside the M.A.G.I.C. studios on Oct. 16 and 17.