From the GroundUp, a Weekend of Music and Celebration 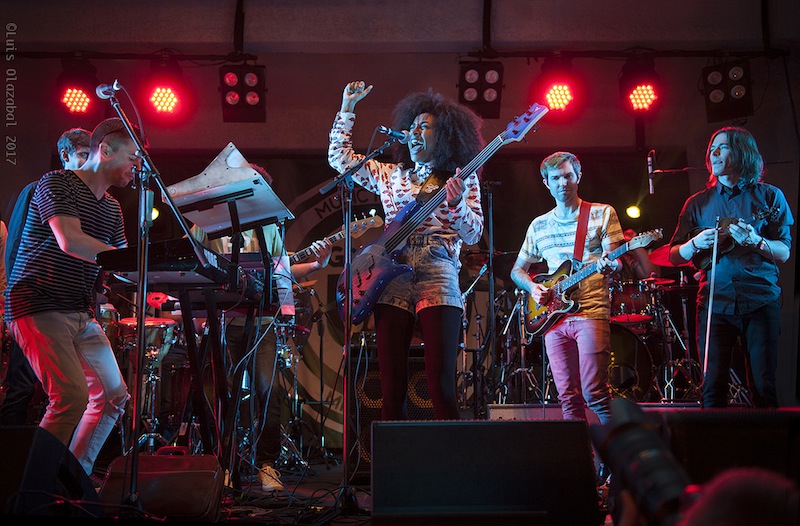 Half way through his set at the North Beach Bandshell, singerDavid Crosby, 75, who has been to a festival or two in his illustrious career, paused between songs to reflect: “How about this festival? Some of my favorite musicians in the world are playing here this weekend,” he exulted. “It’s been fantastic!”

And that was just Friday night. It’s hard to imagine what he would’ve said Sunday night.

The GroundUp Music Festival was that good.

Produced byGroundUp Music, the label created by Michael League, leader and bass player of the multiple Grammy winning genre-crossing bandSnarky Puppy, the ambitious event included two stages featuring alternating performances, an after-concert program at the Deauville Hotel, workshops and talks and a setting that included food stands and hammocks. For the festival, GroundUp Music collaborated with local entities such as The Rhythm Foundation (which manages and programs the North Beach Bandshell), the University of Miami’s Frost School of Music (which closed its Festival Miami with performances at the Bandshell and the Park stage), the City of Miami Beach, and the Miami Beach Visitor and Convention Authority, which contributed some funding.

“I like to reach out and find ways to involve the local community organizations. I think it’s important that we all support each other,” said Paul Lehr, GroundUp’s executive director and the former executive director of YoungArts. “My intention has always been that this would be an annual event in Miami. I hope it really gets embraced by the community.” As it turns out Lehr discover Snarky Puppy through his son and brought League to speak at Young Arts. That started a relationship that in time resulted in Lehr’s joining the fledging label. He estimated that “because of the enormous following of Snarky […] we have 50 percent of the people coming from out of the state and 16 percent of that is coming from outside the country. Just for the festival.”

According to the organizers the final tally was about 3,000 tickets for the 3 days. There were attendees from 34 different countries, about 1,700 tickets were bought by people from Florida, of which about 510 were bought by Miami and Miami Beach residents.

And lest you take yourself a bit wee too seriously, there was a set byDerek Smalls& The Bottom Feeders, the last final evening at the Deauville Hotel. Smalls, aka Harry Shearer, was the pipe smoking bass player of the almost great, sort of lamented British band Spinal Tap. Sunday night,Smalls revisited old Tap’s hits such as “Break Like The Wind,” “Hellhole” and “Sex Farm,” playing them loud and with great enthusiasm.The rest of his band looked and sounded suspiciously like members of Snarky Puppy in various degrees of [rock] dress code violations. Smalls respected head banger tradition and appeared as if preserved nearly intact from the 80s, even if his hair and distinctive sideburns/mustache are now white.

Remarkably, not only did the trains run on time (an achievement given Miami’s loose concept of punctuality) but the whole spirit of the Festival was one of low key, mix-and-match collaboration, perhaps best embodied by bassist and singer Esperanza Spalding, who as “Artist in Residence” sat in with different groups and artists throughout the weekend.

“You don’t know how rare this is,” said Spalding from the Park Stage, where she and singer and songwriter Becca Stevens turned a performance into an impromptu songwriting master class. “To have an event like this, [with people who] treat fellow musicians with respect and love and honor, and to have a cross-pollination from the ground up… it’s soamazing.”

Musically, there were many memorable moments. Snarky Puppy anchored the program every evening and it was, consistently, a highlight of the day. This is a loose-limbed, large ensemble that one moment can suggest a 21stcentury big band, and without missing a beat morph into a loose Afro-Beat orchestra; or, in the span of one set, allude to Frank Zappa, Brazilian samba, Middle Eastern music, Hermeto Pascoal, blues, New Orleans second lining and Weather Report, all metabolized, without pretention, in a distinct, original sound.

Accompanied by a quartet comprising League, Becca Stevens and Michelle Willis (enlarged on two songs by Spalding who played bass and sang), Crosby was mesmerizing. His expressive singing, the vocal harmonies and the songwriting remain translucent and affecting after all these years. He turned the Bandshell into a living room. With a new record out and in a no-nonsense mood, he was clearly not about to wallow in nostalgia. And then, without sentimentality or special introductions, he revisited “Deja Vu” and “Woodstock.” The songs were older than most of the people in the audience and thus probably, for many of them, just another couple of nice tunes. But for the graybeards in attendance, this became a gasp, I-can’t-believe-I’m-hearing-this-live moment.

Sunday, the day started with stirring sets by The Lee Boys with Roosevelt Collier and Brazilian flutist Malta and his Pife Muderno ensemble. It was an unkind scheduling for The Lee Boys who started playing at noon before a small audience. It didn’t matter. The Boys played and sang with the grace, sense of purpose and passion of ministers preaching to unbelievers. And if that blast of energy was not enough, Malta and his group showed that you don’t actually need to plug in to electrify an audience.

Their performance included a triangle solo, a feature with a quartet ofpandeiros(hand held drums), virtuoso flute playing and ended with the band marching down the stage to play among the audience. Suddenly the Bandshell became a neighborhood plaza in a town in Brazil.

Snarky Puppy closed the Festival at the Bandshell with a final set that had a bit of everything — strong tunes; tight, purposeful soloing; inspiring guests (including Spalding, Chris Thile, Mata and Pedrito Martinez) and a moment to share the group’s joy for winning their third Grammy.

The celebratory mood was a perfect bow wrapping up the three-day event.

“It’s the first time we’ve done something like this,” said Puppy’s mastermind League, as he thanked their collaborators from the stage. “I don’t know how they did it. We just play.”

Whatever League, GroundUp Music and their collaborators did, here’s for them to do it again here at the Bandshell.