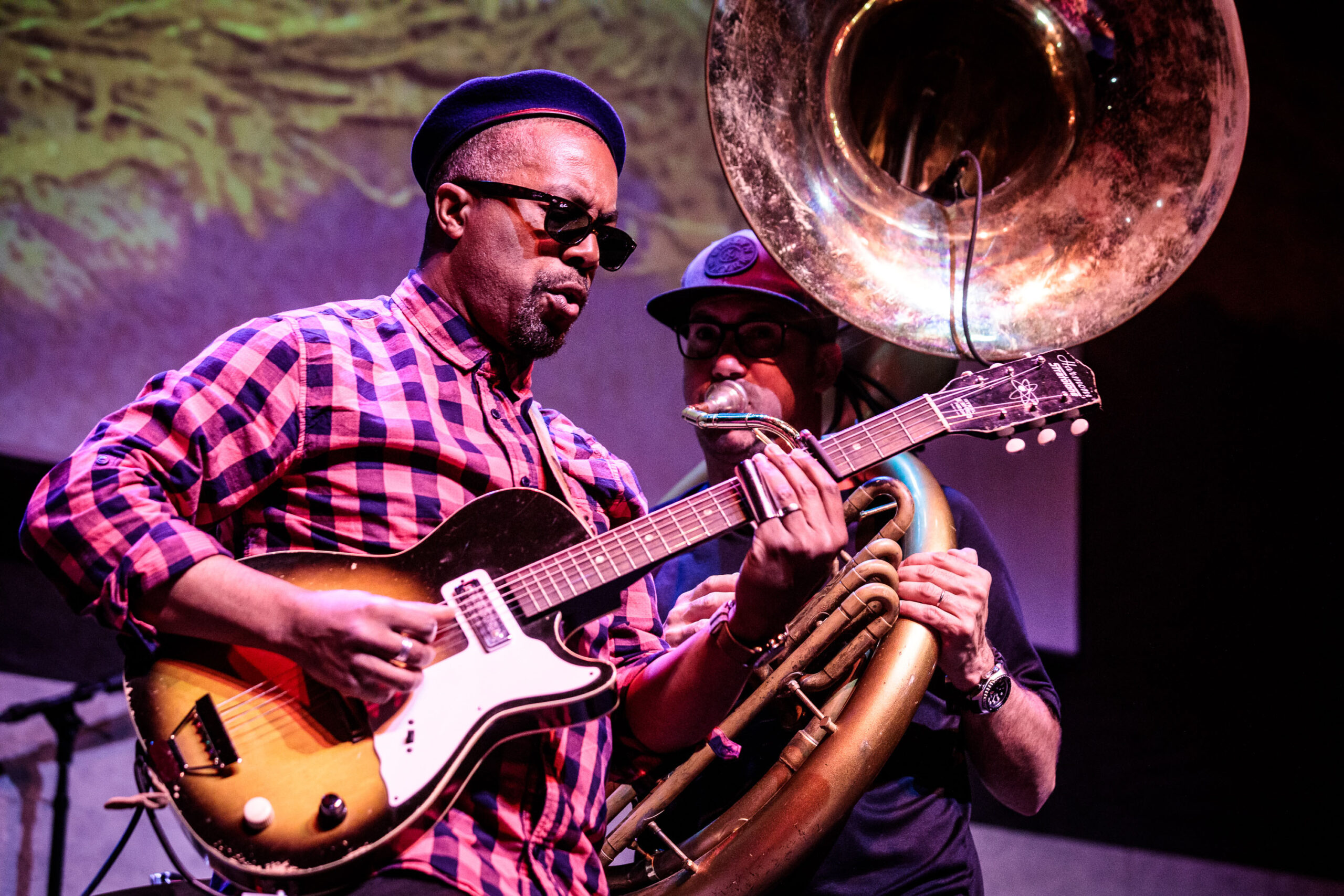 Singer, songwriter, and guitarist Pascal Danaë, founder and leader of Delgres and Rafgee on sousaphone at the France Rocks Festival. The trio plays the North Beach Bandshell in Miami Beach on Tuesday, June 21. (Photo courtesy of Sachyn Mital)

The Creole blues of the Paris-based power trio Delgres suggest the earthy sound of Mississippi blues reimagined with an African and French Caribbean accent. Featuring electric guitar, drums, and sousaphone, a brass instrument of the tuba family in place of a conventional acoustic or electric bass, the trio can hit like a heavy blues-rock group one moment and then hint at a New Orleans street parade the next. The lyrics, sung mainly in Creole, may tell personal stories or speak of matters such as poverty, social justice, and the plight of the immigrant.

It’s an old blues sleight of hand: a spoonful of reality in a serving of a good time.

“This is probably a Black music thing that’s universal,” says singer, songwriter, and guitarist Pascal Danaë, the founder and leader of Delgres. “The blues is not sad music. They might be talking about terrible conditions, they might be talking about terrible losses, but the bottom line is hope. That hope comes from when you pick up your guitar and start singing about your problem. They’re going to hear the problem — but the music is for having a good time and will also give them the cure. We get the trouble and medicine at the same time.”

Comprising Danaë, Baptiste Brondy on drums and vocals, and Rafgee on sousaphone, Delgres headlines the Fête de la Musique at the North Beach Bandshell Tuesday, June 21, at 8 p.m. The show is presented by the Cultural Services of the Consulate of France in Miami and the Rhythm Foundation, in partnership with Make Music Miami and with the support of Miami Beach Arts in the Parks. The event is free, but it does require RSVP.

The group has released two albums “Mo Jodi” (“I’ll Die Today”) and “4 AM.”  Sang in Creole and English, “Mo Jodi” addresses issues such as freedom and slavery. It served notice about the direction of the music while paying tribute to the historical figure the trio has taken its name.

Delgres is singer, songwriter, and guitarist Pascal Danaë, Baptiste Brondy on drums, and vocals, and Rafgee on sousaphone. (Photo courtesy of Remy Serre)

Louis Delgrès, a Creole officer in the French Army, died in Guadeloupe in 1802, fighting against Napoleon’s Army, which had been sent to the French Caribbean to re-establish slavery. The follow-up, “4 AM,” speaks of immigrants dying for a new beginning, joblessness, and slavery, but also family stories such as the anguish of separation when parents emigrate and children are temporarily left behind.

“I’m doing a bit of my own therapy with all this,” Danaë once said about the themes in his lyrics.

“Growing up in France as a French person, but of Guadeloupean roots, not completely French, … just led me to wonder later on in my life: So, who am I exactly?” elaborates Danaë now. “You start scratching that surface and start going deeper and deeper. That’s what’s in those songs. Even when I play like fierce rock and roll or very heavy, heavy guitar, it’s a release from pain and things that I have to cope with.”

Born and raised in Paris of Guadeloupean parents, Danaë grew up listening to a variety of music, from Cuban Son to Congolese rumba to jazz and English rock. He got his first guitar at 15, a gift from his brother-in-law to pass the time one summer. He started playing American folk music at home and eventually graduated to playing jazz and fusion in clubs around Paris. In 1997 he moved to London, where he lived for eight years, and then to Amsterdam, where he spent three years before returning to Paris. Along the way, he worked as a studio musician and performed and recorded with artists such as Peter Gabriel, Youssou N’Dour, and Harry Belafonte.

While in Amsterdam, he discovered the Dobro, a resonator guitar with a distinct sound that, says Danaë, “comes with the history of the blues.” The find had a profound impact on his work. “You must let it resonate  . . .  so you start listening to yourself. It becomes a dialogue with the instrument. It was like learning to walk again. I use an electric guitar on stage because it’s more practical, but when I get back to the Dobro, it’s like, okay, this is the blues, this is roots.”

He was at the time “at a crossroads between different professional pathways,” he once said in an interview, and the find led him to play blues. He said his writing acquired a new depth, and he went back to singing in Creole, “like my ancestors had in Guadeloupe.”

Danaë is working on a third album with Delgres, speaking about new battles he once felt had long been settled.

“When we did “Mo Jodi,” some people looked at it like ‘well, that’s something in the past,'” says Danaë. “But you look at the world now, and it’s all coming back. It’s not a thing from the past. The fight about freedom, dignity, equality, and injustice is now. We have to keep our eyes open and keep talking about these things because there’s still a lot of work to be done. So, I feel that we as artists must do our part. It’s a small one, but we need to keep going, keep singing those songs and get people together as much as we can.”