For Nestor Torres, upcoming ‘Live in the Park’ is love letter to Dominican Republic 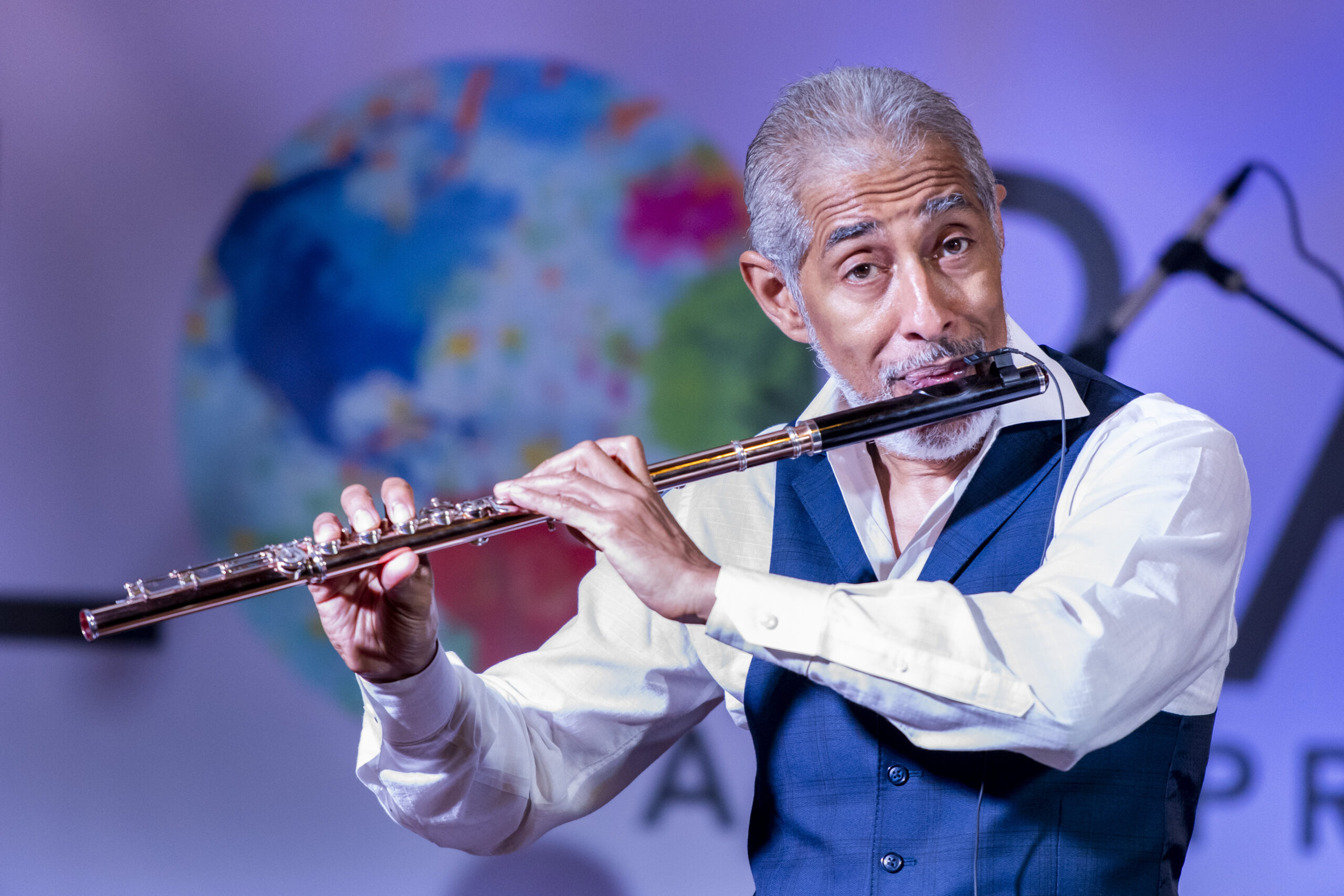 Néstor Torres will perform his favorites plus new works from “Dominican Suite” in a concert Saturday, Nov. 26 at the Westchester Cultural Arts Center. (Photo courtesy of MagicalPhotos/Mitchell Zachs)

Néstor Torres, flutist, composer, Latin Grammy winner, and Grammy nominee, is an artist loved and appreciated by the Miami public that watched him grow up. So, the announcement of his next concert, which will take place on Saturday, Nov. 26, at 8 p.m. at the Westchester Cultural Arts Center, is welcome news.

“This concert has a deep meaning for me because I owe my career to the public from South Florida, but especially to Miami,” says Torres. “When I moved here, first with Hansel and Raúl, and then dabbling in my career as a soloist on Calle 8, a very affectionate audience supported us. It’s exhilarating, especially knowing there is a great expectation, and many of the public are responding because they want to see us. So, this is a very special presentation.” 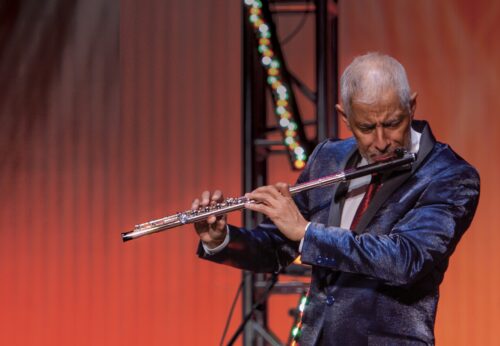 “I owe my career to the public from South Florida, but especially to Miami,” says Néstor Torres. (Photo courtesy of Paul Richardson/ALG Entertainment)

The concert of Torres and his ensemble will take place within the framework of the autumn season from the musical series Live in the Park! (a collaboration between the Roxy Theater and Broadway Factor, a theatrical production company based in Miami). There will be the classics along with notable selections from “Dominican Suite,” an album dedicated to the music and culture of the Dominican Republic, which premiered in October.

“Dominican Suite” is conceived for flute and “big band” by Corey Allen, a producer and arranger. Allen has worked with prestigious singers and groups, such as The Manhattan Transfer, Lou Rawls, and Chuck Mangione. But this is the first musical project of the veteran producer with Torres and could be defined as a love letter to the town, landscape, and musical culture of the Dominican Republic, materialized in genres such as merengue, bolero, bachata, salve, and mangulina. 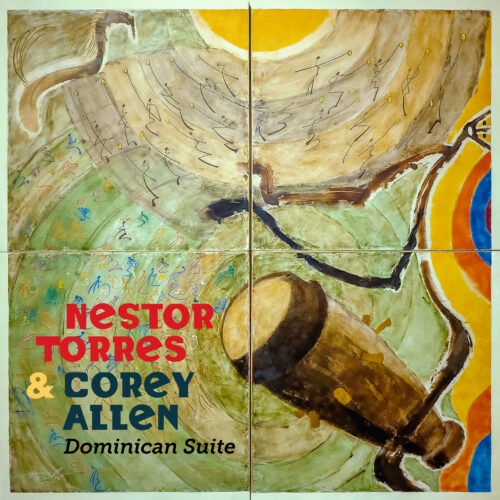 “Dominican Suite” was released in October. Torres says it is a love letter for Dominicana. (Courtesy of Nine-PM Records)

“The idea of collaborating with Corey goes back about five years when we were in Santo Domingo, Dominican Republic, at the International Jazz Festival Restoration,” remembers Torres. “There, he told me his concern that the Dominican public was not well receiving his style. So I suggested that he keep his style faithful to the essence of his sound. Adding that he could apply it to songs in Latin American repertoire to give the audience a sense of familiarity.”

“He followed my suggestion, it worked for him, and it was very efficient, very effective,” says Torres.

“From there, he says, Allen began to explore possibilities and develop this idea of making a work, a jazz suite for ‘big band’ and flute with Dominican rhythms. The project evolved, and he invited the Dominican artists Maridalia Hernández and Pavel Núñez, among others.

“In addition, he makes a special version of the song ‘Si tú no bailas conmigo’ by Juan Luis Guerra, his friend and classmate at Berklee College of Music. That’s how this musical gem came to fruition. It gives me great satisfaction to have been like a trigger for his muse because ‘Dominican Suite’ is an extraordinary production”.

The making of an album whose central piece is a suite made up for flute and “big band” by four different themes, also supported by another six, is,”a challenge, an achievement, and a possibility,” according to Torres.

“The production was extremely relevant to me. First, because the compositions and Corey’s arrangements are difficult, technically demanding, and it’s an idiom of traditional jazz, specifically the bebop style,” explains Torres. “The other aspect of the challenge was that I am regularly a spontaneous artist, and I improvise and do the phrasing my way.” 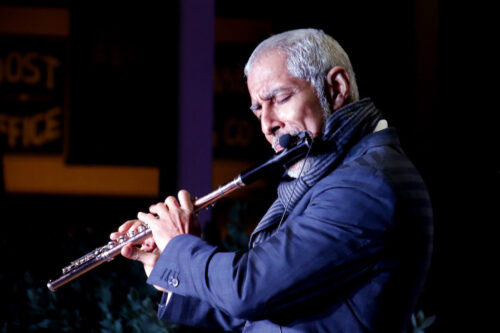 Néstor Torres and his ensemble’s performance Saturday, Nov. 26, will take place within the framework of the musical series Live in the Park! (Photo courtesy of ALG Entertainment)

Torres says that Corey was precise in what he wanted. “It was a challenge and an opportunity to give in and put myself in the hands of someone else’s product to serve his vision. And that is the achievement of the project. It was not easy, but I managed to expand my vocabulary. It was very emotional and intense in a way that I had never experienced before.”

The album and the presentation at Westchester Cultural Arts Center constitute a show of love for the Dominican people and their traditions, he says.

“The message I want to give the Dominican public is that this project is a love letter for Dominicana, its people, culture, and music. This process made me rediscover something. Although my earliest influences musically were those of my father and long before those of the Cuban charanga (I always say that Cuban music runs through my musical veins). Still, the first memory of my childhood goes back to when my uncles arrived with instruments like tamboras and güiras from the Market Square of Santo Domingo. Therefore, Dominican music and its people have always been very present in me. To them, I dedicate this music that unites us in time,” he says.

The Live in the Park! series, dedicated to the memory of George Cabrera, a Broadway Factor producer and contributor to the Westchester Center and the Roxy Theatre, continues with three more concerts: Tito Puente Jr. (December 3); Albita (December 17), and Marlow Orchestra Rosado and DJ El Russo (December 31).