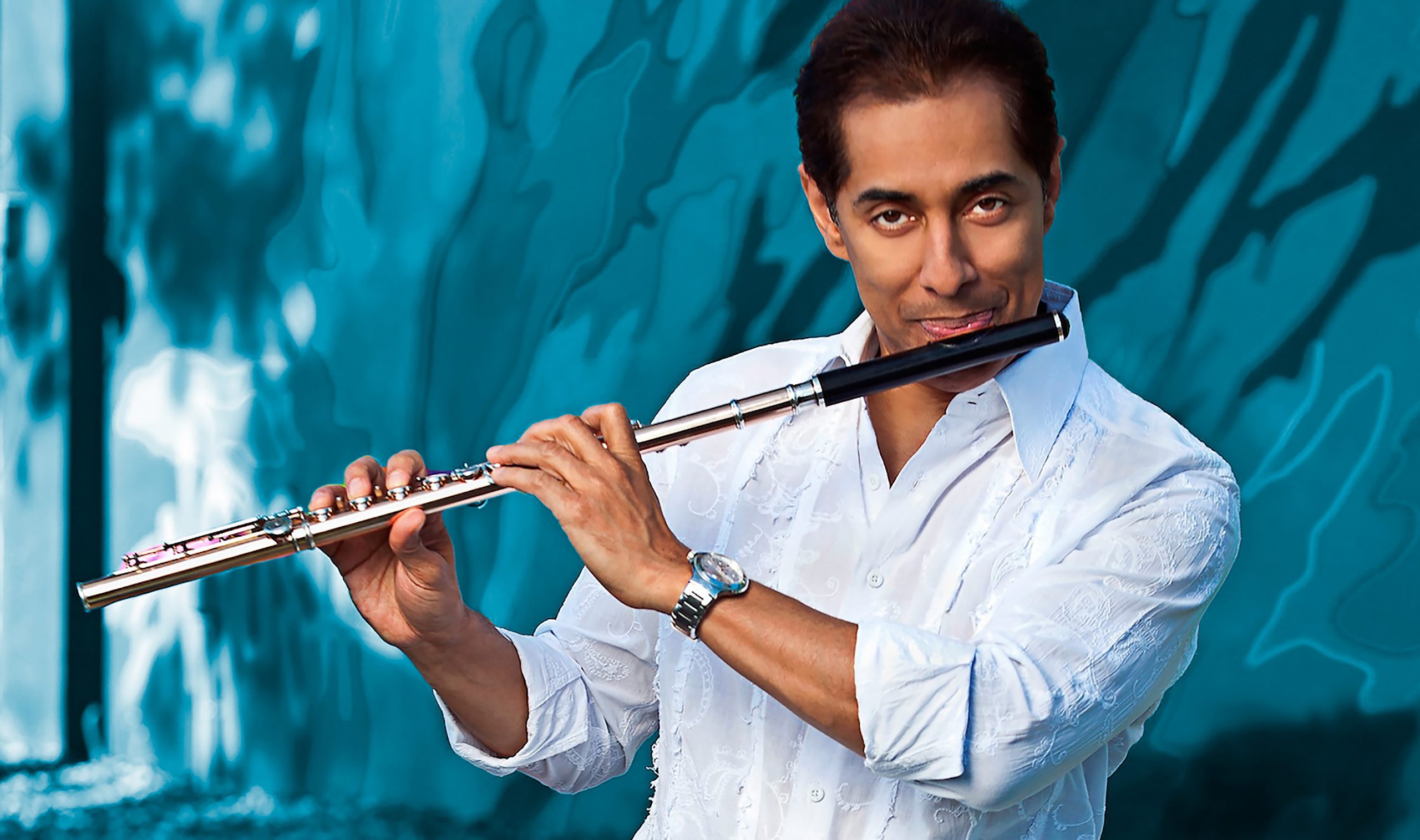 A versatile performer who moves between Latin jazz, classical music and other genres, Nestor Torres will perform with his trio on Dec. 13 at The Ancient Spanish Monastery in North Miami Beach. (Photo courtesy of Wm. S. Haynes Co.)

A 12th-century monastery near the hustle and bustle of Biscayne Boulevard may seem an unusual sacred spot. But it’s one that Nestor Torres, a practicing Buddhist, finds most inspiring.

“I’ve always been enchanted by the environment and the space,” said the Latin Grammy-winning flutist and composer, who first performed at the North Miami Beach landmark after moving to South Florida in the early ’80s.

Torres returns to The Ancient Spanish Monastery on Dec. 13 for an annual fundraising concert. This year, the outdoor event will require social distancing and mask-wearing, and will also be livestreamed for those who prefer to watch from home.

Torres and his trio – Jorge Luis Sosa on keyboards, Agustin Conti on bass, and Rey Monroig on drums – will perform a mix of Latin jazz standards, Christmas favorites and some of Torres’ original compositions.

“Guests are excited about the combination of Nestor’s rhythmic and melodious music featured in our beautiful natural environment,” said Janie Greenleaf, president of The Ancient Spanish Monastery Foundation, which supports the historic site.

St. Bernard de Clairvaux is a medieval monastery that arrived from Spain in boxes and, thanks to a local philanthropist, found a home off North Dixie Highway in the mid-1960s. The 20-acre property includes an open courtyard, cloisters, lush gardens, and an Episcopal church and museum.

Torres, who practices Nichiren Buddhism and sees a mentor in Buddhist philosopher-educator Daisaku Ikeda, is drawn to a space where Cistercian monks once prayed and chanted.

“In these times that we’re living, we are in great need of sacred spaces – and not just a church or a house of worship,” he said. “For me, the significance of a sacred space is the space that we create between each other based on fundamental mutual respect and appreciation for each person.”

Torres has encountered sacred spaces throughout his career.

Born and raised in a musical family in Mayagüez, Puerto Rico, Torres, who is 63, moved to New York as a college freshman, spending several years performing with Cuban charanga bands and completing his education. He is a classically trained flutist who studied at New York City’s Mannes School of Music and the New England Conservatory of Music in Boston.

After moving to Miami in 1982, Torres became a soloist focused on jazz, but also incorporating classical music, Latin rhythms, hip hop and reggaeton. He has released 18 albums to date and performed with artists ranging from Herbie Hancock and Tito Puente to Gloria Estefan and Israel “Cachao” López.

At his core, Torres is about the bond between music and spirituality.

He was a practicing Buddhist in 1990 when he suffered a boating accident that left him with 19 fractures, a collapsed lung and other injuries. “It was from the accident that I experienced what Buddhism really is,” he said.

At the time, Torres’ career as a jazz soloist was taking off. He had just released his first label album, “Morning Ride,” which made it to the Top 10 on Billboard’s contemporary jazz charts.

But his career went south during his long recovery. At the time, he had no health insurance, and it was questionable if he would perform again. It was during this period he discovered something that has now become popular: the value of frontline health-care workers.

“The ones who were always there were the nurses … they were so caring and loving and giving,” Torres recalled. “It was because of them I was able to recover.

“It also dawned on me that here I was, a celebrity with a career that was taking off. I came to realize they were the real celebrities.”

Torres was struck by another moment of enlightenment on the day his album, “This Side of Paradise,” was to receive a Latin Grammy Award as “Best Latin Pop Instrumental Album.” The date was Sept. 11, 2001.

The musician was in Los Angeles, on his way to a Buddhist Center for morning meditations, when he heard the news about the terrorist attacks.

Up to then, an ecstatic Torres had viewed winning a Latin Grammy as a crowning moment in his career.

“Something so important to me in a moment became meaningless,” he reflected. “Because my feeling at the time was that if my work as an artist could not contribute to transforming people’s hearts, so that something like that would not happen again, then what was it worth?”

He was determined to find out. Focused on New York, Torres embarked on what he now calls a spiritual musical pilgrimage, visiting churches and houses of worship from different faith traditions, near Ground Zero. He played wherever he was allowed to bring his flute and his portable recording equipment.

The list included St. Peter’s Catholic Church in Manhattan’s Financial District, which had been used as a staging ground for rescue workers and recovery operations. There, within its sanctuary, he improvised.

“I was hoping to capture something about the spirit of the city, what was going on at the time,” he recalled. “I wanted to be an agent of change.”

It took Torres about two years to edit and transcribe his New York improvisations. In 2004, Florida International University asked him to compose and perform a piece for the Dalai Lama, who was visiting the campus for a lecture on world peace.

The commissioned work and his Sept. 11 compositions became the foundation for “Dances, Prayers & Meditations for Peace.” The seminal 2006 recording included “Saint Peter’s Prayer,” an ode to his improvised performance at the lower Manhattan church.

“What keeps me going is my Buddhist practice,” said Torres, commenting on the struggles of the past year.

He has stayed busy, completing his second classical album, recording a single with Dominican urban artist-producer Maffio, and working as an artist-in-residence with the Florida Youth Orchestra. He is about to release a Latin-style Christmas single that he recorded with young musicians he mentored.

“So as challenging and difficult as this pandemic has turned out to be for so many of us, this is an opportunity to transform any situation to value,” he said. “It’s about making a determination – as long as we never give up, we will never be defeated.”

WHAT: “Jazz Holiday at the Monastery,” featuring Nestor Torres