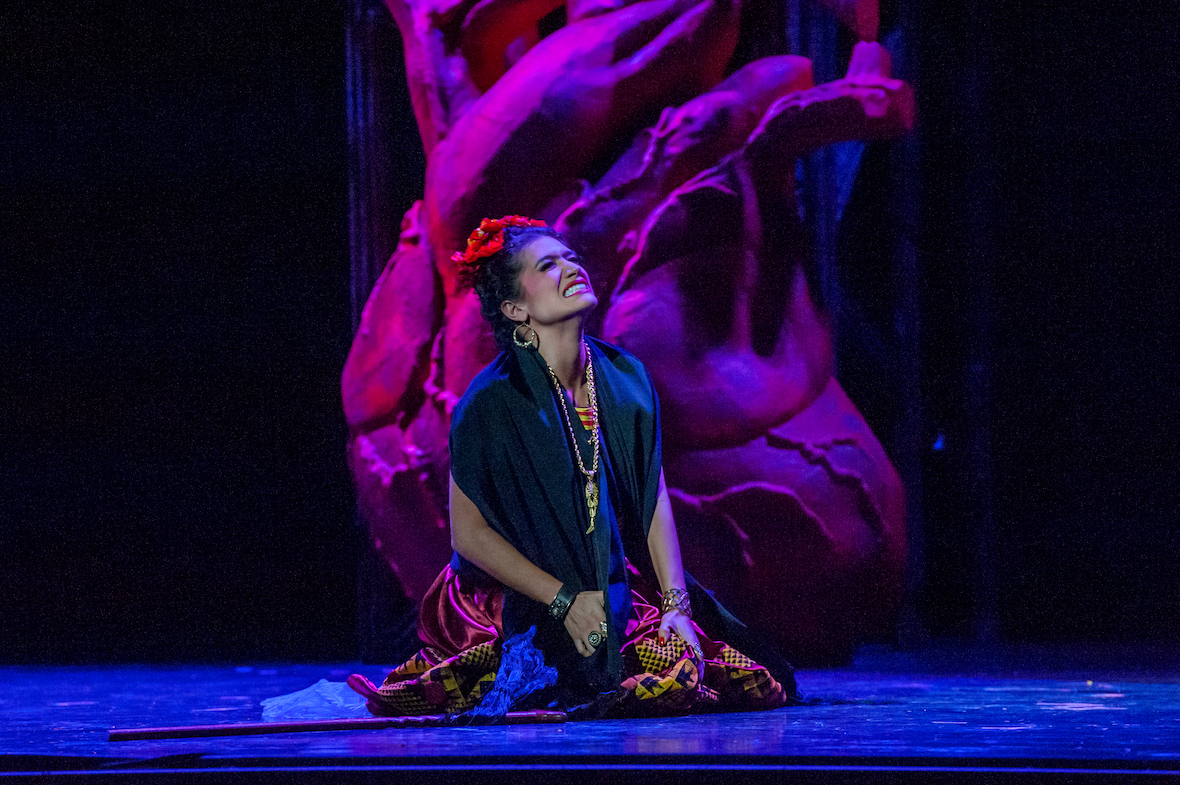 It’s probably an exaggeration to say that Catalina Cuervo was born to play Frida Kahlo. But how many people can say they learned about the famed Mexican artist at such an early age?

“I’ve always been interested in Frida the artist since I was very young, as a Latina woman,” recalls the Colombian-born soprano, now 37 and playing the lead role in the South Florida premiere of “Frida,” Robert Xavier Rodríguez’s biographical opera. “And my aunt is a painter herself, and very liberal and also very advanced for her time. And so I remember since I was very little, my aunt always talking about Frida this amazing artist, and about her life, and about femininity and what it meant. So I grew up knowing about Frida way before the opera was even in talks.”

The serendipity doesn’t end there, as Rodríguez handpicked Cuervo for the role.

“When he saw me in an opera here in Miami in 2014 — I was doing ‘Maria de Buenos Aires’ — we were doing a double bill with him and his short opera called ‘Tango,’ ” Cuervo says. “And he said to me, ‘Catalina, I composed an opera and I premiered it many, many years ago in the ’90s, and I think you’re perfect for it — this opera is based on the life of Frida Kahlo.’ It was like a dream come true. Like, ‘You’re telling me there’s an opera based on the life of Frida? That would be amazing!’ And it has been one of the greatest gifts in my life.”

“Frida,” presented by Florida Grand Opera, opens Saturday, March 16, at Miramar Cultural Center and runs through March 30 across three venues, including March 21-24 at Miami-Dade County Auditorium. The show is as bold and colorful as the artist it portrays, sweeping through all phases of Kahlo’s dramatic and passionate life, including a near fatal bus accident when she was 18 and, of course, her stormy romance with the great muralist Diego Rivera, played by bass-baritone Ricardo Herrera in his FGO debut.

That range of emotional expression was one of the bigger challenges of playing Kahlo for Cuervo.

“It goes from her being 12 or 13 years old all the way to her death at 47,” Cuervo says. “So she goes through all different emotions, moments in her life when she was feeling a lot of pain, but also moments where she was very mischievous and playful when she was in school. And then, when she met Diego Rivera and fell in love, a sexual woman.”

To accurately portray all aspects of Kahlo’s life, “Frida” features sexuality, language and nudity, something that might bother many actresses. But Cuervo doesn’t shy away from it.

“I’m completely comfortable with it, because it’s justified,” she says. “Frida Kahlo was very much free with her sexuality. There are many, many pictures of Frida just topless, sitting on a chair, talking to friends, smoking a cigarette. She was really not a conservative woman in that sense. She was conservative in other things, like the value of marriage, or family, or the value of being a proud Mexican. But she was very liberal in terms of her body and sexuality. And we need to show that part of Frida.”

Another part of Kahlo the opera focuses on is her eyebrows, notoriously bushy and meeting in the middle, a feature that is carefully crafted on Cuervo each night with makeup.

“I wasn’t blessed with the eyebrows that she had by birth,” Cuervo says with a laugh. “I have sort of thick eyebrows, but I don’t have the midsection, you know, the connection. The makeup artists do a beautiful job, and they make sure it’s very much like her eyebrows in real life — not from her paintings, but her pictures.”

Rodríguez has said that his opera follows several notable composers’ tradition of “dissolving the barriers and extending the common ground between opera and musical theater,” which poses another challenge for Cuervo.

“This is not your normal opera production,” she explains. “It’s very much a mix of scenes that are straight-up musical theater and scenes that are very operatic. Also, you will be hearing both operatic singing and musical-theater singing. I will be singing with my chest voice in many instances, just like musical theater, and also other parts where I’m going to be singing completely in my head voice, very lyrical. And I will be combining in some arias the two of them. The reason he composed it that way is he wanted to portray a little bit of Frida’s personality, which was pretty much bipolar. She could go from one emotion to the other very fast, so he wanted to portray the craziness behind Frida.”

Those who have seen the 2002 biopic “Frida,” directed by Julie Taymor and starring Salma Hayek as Kahlo, will find many parallels, as both the film and the opera are based on Hayden Herrera’s 1983 biography of the artist. And although Hayek scored an Oscar nomination for her work, Cuervo — who calls the film’s artistic direction “absolutely gorgeous” — would tweak a few things about the performance.

“The thing that I like less is Salma’s portrayal of Frida,” she says. “I’ve researched much about her, not only that biography but many biographies, and also video footage, and Frida was a much stronger person and a much stronger personality. The way she talked was stronger, too. I think that Salma’s Frida was a little soft, compared to the personality I think of Frida. But the movie in general I love. It’s very powerful.”

Audience members who watch Cuervo perform and sing may be surprised to learn that she is a rocker at heart (she loves heavy metal bands such as Metallica, Pantera and Sepultura), and didn’t even start singing until she was 18.

“I’ve been a musician since I was 5, but my first instruments were not the voice,” she says. “My first instrument was piano. Then, at 12, I started playing electric and acoustic guitar, and I actually went to rock school — I didn’t go to a classical conservatory when I was a teenager. So I had my band, and I was a guitar player, not a singer.

“But during all this time, I remember praying to God and saying, ‘Please, I ask you for a beautiful voice,’ ” Cuervo continues. “So in my mind and in my dreams, I always saw myself singing onstage. But I didn’t start singing until I was 18. When I came to the United States, I got into Miami Dade College and went straight to the music department and said, ‘I am a guitar player, but I want to be an opera major and I want to sing opera.’ So my first voice lesson ever was in Miami Dade with [professor] Eileen Duffy-Brown, when I was 18.”