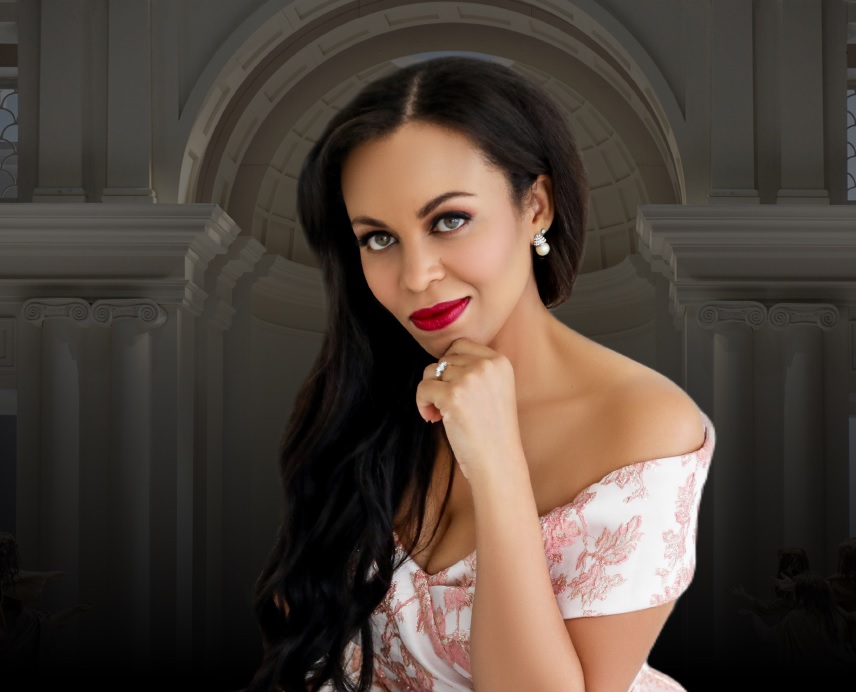 Christine Lyons is Agrippina, one of opera’s fiercest characters, in FGO’s production of the George Frideric Handel opera at the Miami Scottish Rite Temple. (Photo courtesy of Catherine Largo)

While Florida Grand Opera had plans to stage George Frideric Handel’s “Agrippina” as the finale of its 80th anniversary season, it was the location selected for the performances that ultimately shaped the production.

“Agrippina” is on stage at the Miami Scottish Rite Temple opening Saturday, May 14 through Thursday, May 19.

The notion of taking opera out of the grand prosceniums and into smaller spaces had been done before, but during the pandemic when the opera wanted to keep performing and the big halls were shut down, the idea came fully to the fore. Susan T. Danis, FGO’s general director and CEO, decided to stick with it when the larger theaters started re-opening.

While its bigger shows remain in the usual large spaces at the Adrienne Arsht Center in Miami and the Broward Center for the Performing Arts in Fort Lauderdale, Danis says there is opportunity for audiences in bringing shows to different places. The smaller venues may be less intimidating for those who aren’t sure they’ll like opera. Plus, audiences may find that an alternative space is closer to where they live. For her company, its artistic and production staff, Danis says it is a chance for them to be pushed in a different direction creatively.

“It may not look as big and grand, but the outcome and the art are in a different league,” she says.

Her idea for the Baroque era “Agrippina,” which is set in ancient Rome, tells the story of the manipulative wife of emperor Claudius who wants to secure the throne of the Roman Empire for her son, Nero, was to place FGO’s production in the 1800s. “The Regency era, a la Netflix’s series ‘Bridgerton,’ ” Danis explains. 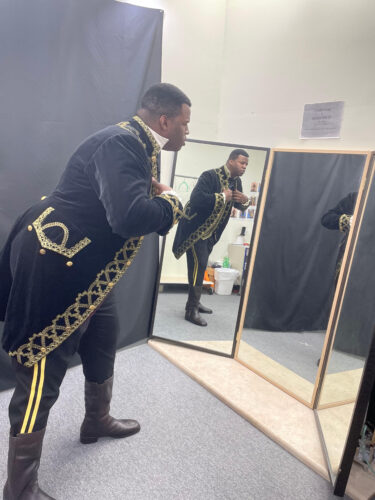 FGO studio artist bass-baritone Christopher Humbert in costume for his role of Pallante in “Agrippina.” (Photo courtesy of Catherine Largo)

She and director Jeffrey Marc Buchman had discussions about creating an environment in the 800-seat Scottish Rite Temple auditorium where the audience would feel as if they were sitting in a 19th century theater. But then, Buchman says when he stepped inside and became immersed, an entirely new concept began for FGO’s “Agrippina.”

“When I walked (throughout) the space,  it resonated like the Hollywood movie set stages of the early 1930s. On the back of the Scottish Rite stage, there was this whole rack of painted backdrops; some of them were hanging in the air,” Buchman says. “So, our production of ‘Agrippina’ will occur during the golden years of Hollywood filmmaking.”

He references American director Cecil B. DeMille directing “Cleopatra” whose story setting is 48 B.C. – DeMille on a Hollywood soundstage in 1934. “That will be the look,” he says.

Buchman’s “concept” production will re-create a 1930s Hollywood soundstage where a production company is filming the opera “Agrippina.” The painted early 20th-century backdrops from the Scottish Rite’s collection will be used as part of the “Agrippina” stage setting. 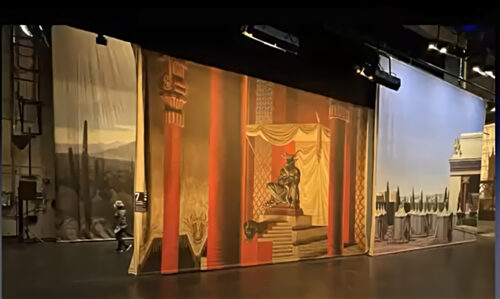 The backdrops at the Miami Scottish Rite Temple convinced director Jeffrey Marc Buckman to create the production around the aesthetic of the theater. (Photo courtesy of Florida Grand Opera)

Miami’s Scottish Rite was completed in 1924. It was four years later that Hollywood would debut its first “all-talking” film, “Lights of New York” by Warner Bros. Pictures.

“When you enter the space, you are as much engulfed in the Scottish Rite design as you are with what will be the production,” Danis says.

Danis says “Agrippina,” with all its comedy and drama, lends itself to the idea of a play-within-a-play type concept, or in this case an opera-within-a-film. In fact, New York’s Metropolitan Opera took a different spin on “Agrippina” in its 2019-2020 season placing the Baroque black comedy in the present day, full of power games and sexual politics.

“With the right spin, it can be very telenovela-esque, for sure,” Danis says. Buchman couldn’t agree more: “(Our ‘Agrippina’) takes all of the heart of Handel’s opera, all of the venom, all of the comedy and the drama that he has put together and we embrace all of that in this production.”

Its concept will capture the elegance of over-the-top Hollywood personalities. He told his artists to “bring their biggest personalities” to the opera –Agrippina will be a quintessential Hollywood diva.

He sets the stage for what the audience can expect. “We will see the cast in a variety of situations on set. Sometimes rehearsing a scene, sometimes having their make-up touched up. There will be times where the actors are ‘rehearsing’ the opera and then go into filming,” Buchman says.

Through all the theatrics, however, Handel’s music will not be understated. Jeri Lynne Johnson, appearing with FGO through Opera America’s 2022 Grant for Women Stage Directors and Conductors, will be at the podium. The barrier-breaking conductor, founder, and director of Philadelphia’s Black Pearl Chamber Orchestra, made history as the first African-American woman to win an international conducting prize while still a student at the University of Chicago. Opera America’s initiative is to encourage the hiring of women in key artistic roles.

She says that the initiative is important to her on many levels, but it isn’t merely about representation. “This is about empowering women at the highest levels. Not just having their presence somewhere on stage. “Women in positions of authority within the productions and that itself is rare and it is becoming more common, thankfully.” 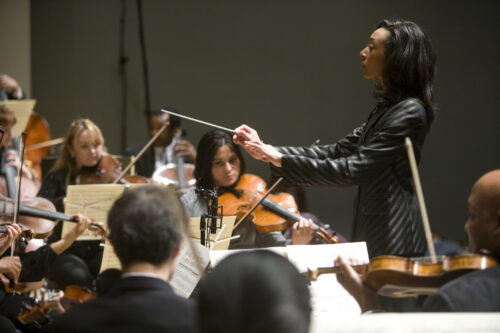 For Johnson, who had dreamt of being a conductor since the age of 7 when she saw her first Beethoven symphony, it’s about what she can bring to the production.

“In full disclosure, I was not a huge fan of Baroque opera before I started preparing and studying for this performance. But once I started looking through the lens as an academic musician – music history and theory, form and structure – I fell in love with Handel’s work.

Johnson’s orchestra for “Agrippina” will be in the Scottish Rite’s small pit and made up of only four violins, a viola, a cello, two oboes, two flues, two trumpets, and a bassoon. In Baroque music, there must be a theorbo, which is a large bass lute, and a harpsichord.

“Those instruments will give us an opportunity to ‘color the text,’ ” says Johnson, adding that Handel’s score is nothing short of “amazing.”

Handel wrote “Agrippina,” his second opera, while in Italy with the first performance taking place in Venice during the winter carnival season of 1709. Cardinal Vincenzo Grimani, whose family owned the theater, wrote the libretto expressly for Handel.

” ‘Agrippina’ is a story of the love of power and the power of love depending on which characters’ point of view we are talking about. We will tell this story with lots of heart, great intensity, and we will take the audience on a wonderfully, farcical comic ride,” Buchman says.

ADDITIONAL INFO: (In Italian with English and Spanish supertitles)