FGO Takes on the Huge Holocaust Opera ‘The Passenger’ 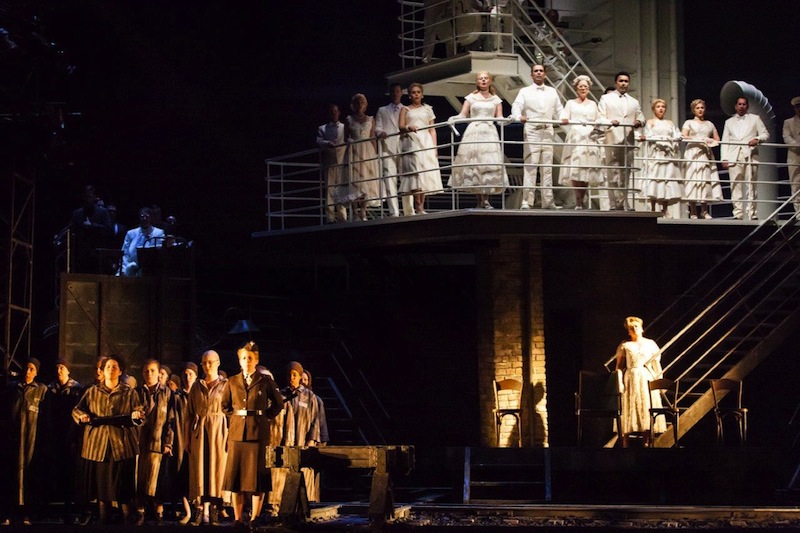 The Passenger isn’t just one of the newest operas Florida Grand Opera has staged, it’s one of the biggest. The set itself weighs 11 tons and has five different levels. It’s so big it can only fit into Miami’s Ziff Ballet Opera House at the Arsht Center, so FGO won’t have a Fort Lauderdale run as the set is too mammoth for The Broward Center’s stage.

FGO’s production has 73 orchestra members, 50 chorus members, and 15 principals. Add to that South Florida having one of the largest Jewish populations in the world, and the modern opera about the Holocaust becomes more than a performance, it becomes an event.

“For us to be part of the communities in America that can bring this important piece to audiences, it is certainly a privilege,” says Philip Pierce, Florida Grand Opera’s director of artistic administration.

The opera by Mieczyslaw Weinberg, a protégé of Dmitri Shostakovich, tells the story of Liese Franz, a former German warden in Auschwitz. She is sailing on a cruise ship with her husband who knows nothing of her past when she spies The Passenger, a woman that she believes was a prisoner at Auschwitz and Liese’s past returns to haunt her.

“Rarely do we get to perform an opera that connects emotionally in a social way….Opera is basically romantic, dramatic, and maybe comic here and there, but it’s basically beautiful music and beautiful singing,” says Steven Mercurio, conductor of FGO’s The Passenger, who was also behind the baton of Michigan Opera Theatre’s recent production of Weinberg’s opera. “But this opera, dealing with the subject matter it deals with, well, it’s grand opera, but it also has great social implications.”

Mercurio explains the challenge of the score for the musicians and the singers. “It’s big and Shostakovich like. There are great periods of eeriness – characteristically it appears as if nothing is going on, and then all hell breaks loose.”

Since Weinberg earned his living writing for film, Mercurio says the music underscores the drama as if it were a movie. “I perceive this opera as a staged work, a filmed opera. You’ll feel as if you’re going to see an operative version of Schindler’s List.”

Weinberg, who completed the score in 1968, never got to see his opera produced in his lifetime. The Passenger had a concert premiere in Moscow in 2006, then director David Pountney staged its full production premiere in 2010 at Austria’s Bregenz Festival.

The Warsaw-born Polish Jew escaped the Germans in 1939 on foot, heading to Minsk with his sister and his parents. “His sister’s shoes were too tight,” Pierce says, adding that he has become immersed in the Weinberg canon since he began researching the composer leading up to FGO’s South Florida premiere of the opera. “So when his sister and parents turned around to head back, they got caught by the Germans and eventually were sent to a concentration camp and murdered.” Weinberg made it to Minsk.

Pountney’s production was previously seen in Warsaw; London, and Karlsruhe, Germany; and in the U.S. in New York, Houston, Chicago, and Detroit. Miami is only the fifth U.S. city to receive The Passenger.

“We have an advantage in that there is a whole community of people who know how to present this opera” says Pierce. Pountney and associate director Rob Kearley are in Miami to work with FGO. It will be the eighth time they’ve put the show together, according to Pierce. “We can also choose from other casts who have already played the roles.”

One of those cast members is Daveda Karanas, who has performed the challenging role of Liese, the former SS guard, in productions in Chicago and Detroit, and will join FGO’s The Passenger.

Mercurio says the mezzo-soprano inhabits the role. “Her character is so despicable, it’s a hard role to live in. Most people would just survive the role, she lives in this piece.”

Karanas says that the role is challenging on many levels, but especially because it is a person who existed in real life. The singer felt so compelled to bring truth to the role that she visited Aushwitz.

Following a European audition tour, she flew to Poland where she received a one-on-one, two-day tour. Privy to a research center there that had many testimony books about surviving prisoners that had left after Auschwitz, Karanas said this is what had the most impact. “The testaments were very simple and stated the facts – that Liesa Franz was an overseer. But to see her name in Polish and know that she really existed and that she was there, it just brought it home for me.”