FGO Gets Intimate with ‘Eugene Onegin’ 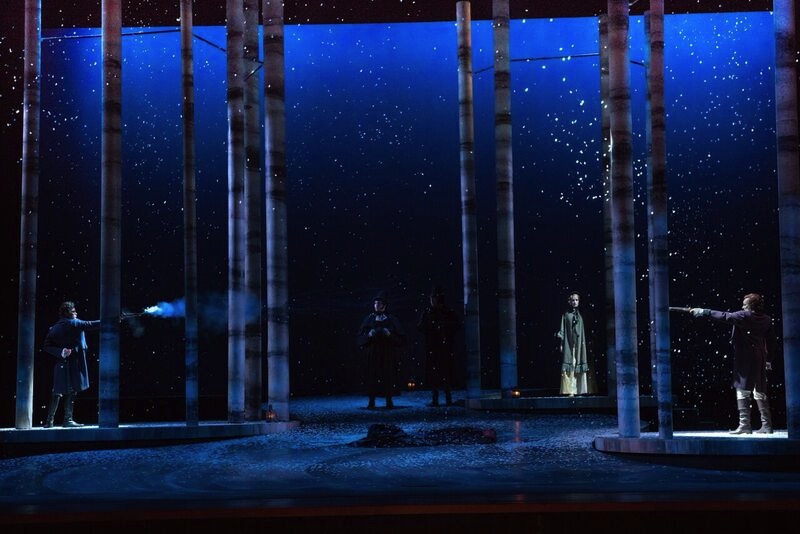 “Heaven sends us habits in place of happiness,” two women of a certain age observe in a famous line from Tchaikovsky’s opera Eugene Onegin. Yet the new Florida Grand Opera production makes the case that habit, or at least experience, might actually be the source of happiness.

In Onegin’s opening scene at the Arsht Center,two sisters sweetly sing of love’s sighs and sorrows. Soprano Dina Kuznetsova has a ruby-toned voice perfect for the role of the bookish, lovelorn Tatyana. Her tone blends nicely with the contralto of Courtney Miller, as her younger sister, Olga. But as their mother, Madame Larina, who recalls her own youthful folly, the more seasoned soprano Robynne Redmon brought greater confidence and power to the stage.

In the relatively minor role of Madame Larina’s servant Filipyevna, bona fide diva Denyce Graves sent a wave of excitement through the hall. The mezzo-soprano, famous for her turns as Carmen and Delila at the Met, outshined the rest of the cast, despite her gray wig and drab uniform.

But this was not an occasion for star power. As director Jeffrey Marc Buchman explains in his program notes, the FGO production rejects the typical operatic drama and spectacle to achieve what Tchaikovsky considered an even deeper human feeling: intimacy.

Though an opera hall is hardly an intimate space, a simple set of columns suggesting a natural birch tree forest gave even the ball room scenes a sense of nature and peace. This is the peace that Tatyana finally finds in her duty as a wife, but that forever eludes the title character, the careless and thoughtlessly cruel, Onegin.

As Eugene Onegin, looking very much the part with top hat and cane, and moving with the grace of a dancer, the dashing baritone Franco Pomponi could have stepped out of a Jane Austen novel or one of the romantic bard Byron’s poems. His voice has a sweet tinge that could easily seduce an impressionable girl, with none of the gravel often heard in this role to insinuate Onegin’s dissolute character.

Kuznetsova captured the wonder of first love in a famous scene where Tatyana writes Onegin a letter confessing her feelings. Her gorgeous, floating high notes ached with desire.

But if Onegin steals Tatyana’s heart, it is his faithful friend — and Olga’s childhood love — Lenski, who stole the show. Tenor Chad Johnson conveyed the pathos of a young man whose jealously has lead him to likely death in a duel with his best friend in a voice tremulous, but controlled.

In another opera, perhaps by an Italian composer, this tragic death might be the story’s end. Following his source, the Russian novelist Pushkin, and Chekhov after him, Tchaikovsky finds tragedy not in dramatic death, but the mundane persistence of life. As Prince Gremin, capably voiced by bass-baritone and FGO Young Artist Alex Soare, intones “all ages surrender to love.”

Unfortunately, conductor Alexander Polianichko did not surrender much to the cast. Tchaikovsky’s music is so full of feeling that the orchestra could tell the story all by itself, but the singers could have benefited from more sensitive pacing as the orchestra crowded even the most poignant moments.