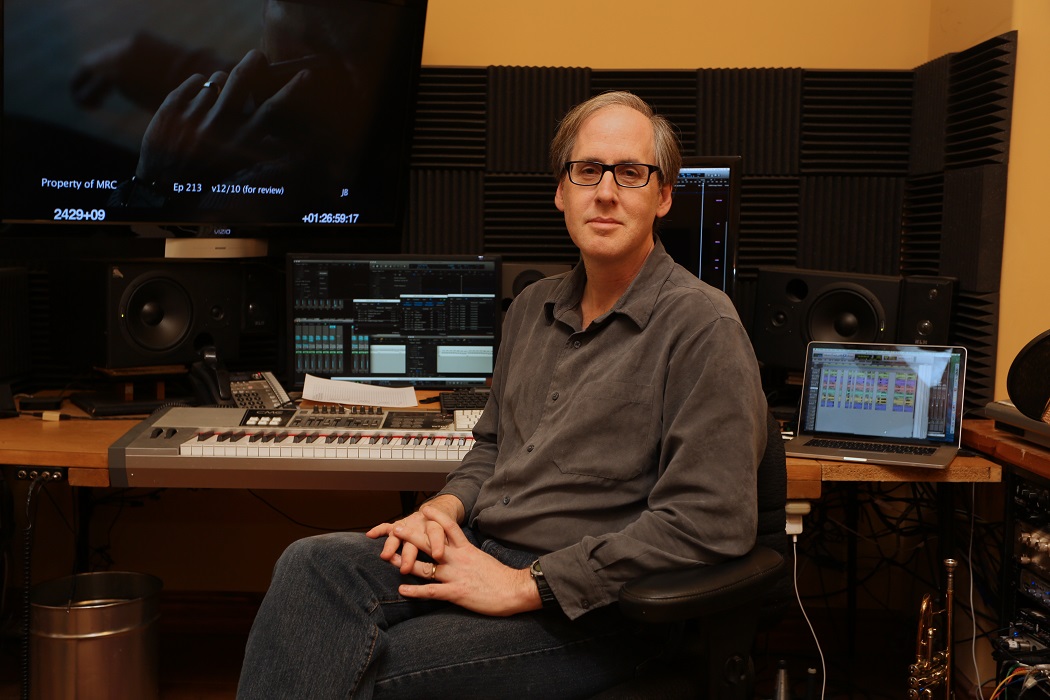 With its bold trumpet sounds and a heavy baseline, the opening theme to the binge-worthy Netflix original series “House of Cards” unmistakably sets the stage for the political drama.

And that’s precisely the point. Jeff Beal doesn’t just compose orchestrations for television shows and films, he creates themes that should “move stories forward,” and complement and capture emotions that are happening on screen.

“A good score should be like a character in a film,” he says.

Beal kicks off this year’s Frost Music Live! Signature Series. There are 110 concerts and events planned for the musical season presented by the Frost School of Music at the University of Miami; however, 24 concerts are part of the Signature Series. These concerts feature Grammy, Emmy and Tony award winning and nominated guests, either as performers or conductors, or both, in collaboration with musicians from the Frost School of Music.

“What we’ll be performing is a live full score with pictures of the film ‘Battleground’ from 2006. This is the first time the score will be played live.” The 15-time Emmy nominated composer says he won an Emmy Award for the score that year. “I’m really proud of this music,” he says. “Battleground,” starring William Hurt, was the premiere episode of the TNT miniseries “Nightmares and Dreamscapes,” an eight-episode anthology series of short stories from Stephen King.

Despite its genesis from a novella, Beal explains that the almost hour-long screen version is “basically a silent movie. There’s no dialogue, so the music has a big part to play in the story. I don’t want to give too much of the plot away, but basically Hurt is a hit man who ends up having a battle in his apartment with toy military men that come to life.”

He promises audience members a “wild ride,” saying “It’s Stephen King so it’s suspenseful, and edgy. The music is very intricate and exciting. There will be two pianos in front of the orchestra going crazy, and lots of percussion,” he promises.

He compares the experience of seeing a movie with a live orchestra to the early days of film. “Silent movies were never silent. There was always music being played. In the smaller towns, it might be a pianist, and in the larger cities there would be a full orchestra.” In fact, Beal’s grandmother, Irene Beal, was one of those pianists that accompanied the silent films.

And while he now creates his music on piano, he began as a trumpeter, spurred by his grandmother who introduced him to the music of Miles Davis, the legendary trumpet player who inspired a legion of jazz musicians.

“The first two records she gave me — she walked over to her collection of vinyls, she pulls out this record with a red and yellow cover. I still remember that. It was Miles Davis’s ‘Sketches of Spain,’ a classic. And the second one was his ‘Kind of Blue.’ What possessed her to give me those records, I don’t know, but I am eternally grateful.”

He says the jazz influence in his work remains ever present.

At the Frost Music Live! concert, the composer will also present four suites from a wide range of his work: “Boston,” a 2017 documentary about the Boston Marathon recorded originally with members of the Boston Symphony Orchestra; from the 2000 movie “Pollock,” which was directed and starred Ed Harris about painter Jackson Pollock; another Ed Harris film, the 2008 American Western “Appaloosa;” and music from a movie Beal scored that will be in theaters this fall. “Bigger” is about the founders of the Mr. Olympia bodybuilding contest, and the two guys who discovered Arnold Schwarzenegger. Beal says it was his chance to create his own theme from “Rocky,” he jokes.

He’s also considering giving Miami audiences a sneak peek of a new piece he’s created for the pilot of a television series that takes place in The Magic City. It’s the Eva Longoria-produced “Grand Hotel,” a sexy, soap-opera-esque drama about the last family-owned hotel in multicultural Miami Beach, debuting this fall on ABC. Pumped full of Latin percussive beats, Beal says, “This is definitely music that is not in any way a traditional orchestral score.”

While moviegoers and television watchers may take for granted the musical soundtrack that punctuates almost every inch of a small or big screen production, Beal says that the concert he’ll bring to Miami puts the genre front and center. “Seeing an orchestra play to a film makes the experience that much more three dimensional and theatrical. And live music, well, that provides a whole other element of drama and energy.”