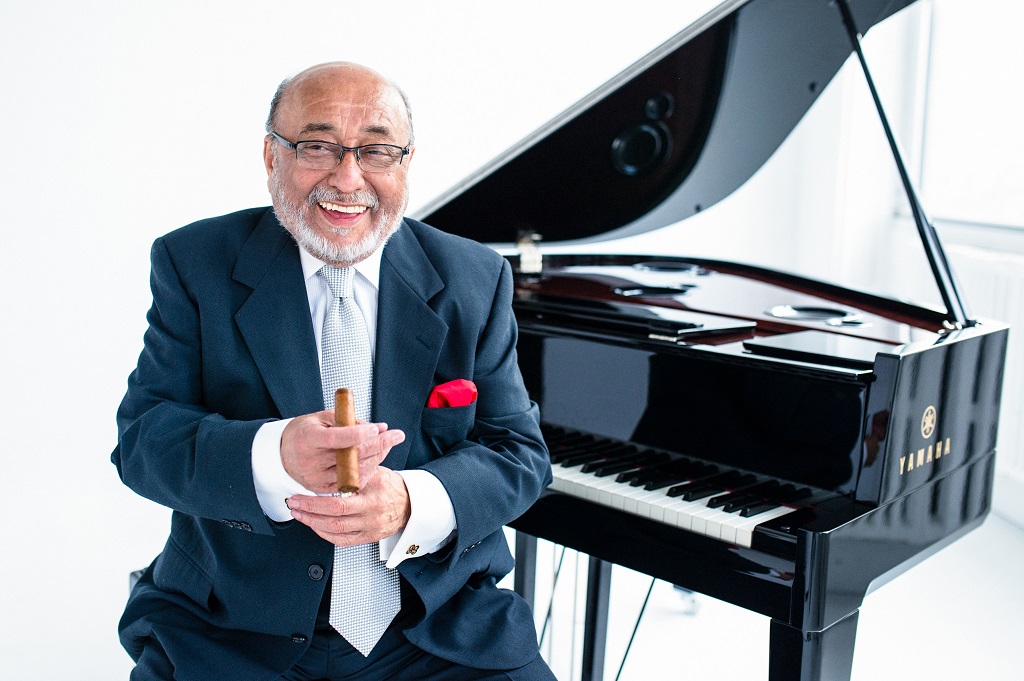 Over his renowned career, Eddie Palmieri has evolved from rebel Mambo King to wise sage of salsa.

At 81, he’s still “El Molestoso” (the Disrupter), a nickname he earned as a young musician for his uncompromising nature and unconventional music style.

Today, he’s become the dean of Latin Jazz, teaching at Rutgers University, where he’s working on a project to incorporate Afro-Caribbean rhythms into symphonic music forms. Over the years, he’s gathered encyclopedic-like knowledge of the African musical diaspora in the New World — from the mulatto-inspired Cuban son to the slaves that sang the blues in the cotton fields of the deep South.

Palmieri has packed all his musical wisdom into “Sabiduría,” his first CD in more than a decade, a place where Cuba’s sacred batá drums meet the beat of New Orlean’s Mardi Gras Indians.

“El tambor [the drum] for me is the pulse of my life,” says Palmieri, who is set to perform with his Latin Jazz Sextet June 2 at Miami’s Olympia Theater. The Miami concert, a Rhythm Foundation co-production, is part of a tour launched last year to celebrate the Latin Jazz master’s new album and his 80th birthday.

“Actually, I’m 31,” Palmieri says with a chuckle from his home in the Bronx. He quotes his friend, the late Cuban trumpeter Alfredo “Chocolate” Armenteros, who advised him: “Once you reach 50, you start counting all over again.”

Palmieri seems to be experiencing a rebirth in creativity.

The Latin jazz pianist, composer and bandleader is working on several new projects. In September, he plans to release “Mi luz mayor,” a Latin big band tribute to his wife of 63 years, Iraida, who died in 2013. It will include guest artists Gilberto Santa Rosa and Carlos Santana, among others.

“Mi luz mayor (my great light) will be the greatest Latin dance album because no one records like that anymore,” he says.

He’s also working on a sequel to his 1971 masterpiece “Harlem River Drive,” which he recorded live at Sing prison with his brother, the late music legend Charlie Palmieri. The album became an underground favorite for its bold mix of Latin dance rhythms, funk, soul and jazz, and social-justice lyrics. Palmieri was inspired to write the piece based on a favorite book, “Progress and Poverty,” by 19th century economist Henry George, who denounced poverty and social injustice in industrialized societies.

For Palmieri, the message of “Harlem River Drive” is as relevant today as it was four decades ago.

“That’s because the only problem we have on this planet is called poverty,” he says. “It is the parent of all wars and crime and you see this all over.”

Yet Palmieri remains positive and passionate about his musical heritage and its impact on the world.

“Latin jazz is the fusion of the 2st century. And that’s because the jazz harmonic structures and the rhythms that are the most complicated and exciting came from Africa,” Palmieri says.

Cuba is the place that stylized and modernized these rhythms, which traveled throughout the region. “And from the cross culture between the African and the Spaniard came el mulato – and el mulato puso el mundo a bailar [the mulatto made the world dance].”

Palmieri has been making the world dance since he started playing music with his brother Charlie growing up in a Puerto Rican household in the South Bronx. The older Charlie was a gifted pianist who at 14 performed with the Tito Puente Orchestra and other popular Latin dance bands. Eddie had also studied piano but switched to timbales at 13 to join his uncle’s band, El Chino y su alma tropical.

One day, he recalls his mom saying: “Eduardo, don’t you see how handsome your brother looks when he goes to play and doesn’t have to carry all those instruments.” After that, “I went back to the piano. And I’m so happy my mother was my mother.”

And so are music lovers everywhere. Over his six-decade career, Palmieri has won 10 Grammys, a Latin Academy of Recording Arts & Sciences Lifetime Achievement Award and a National Endowment for the Arts Jazz Master title, among many others. The Library of Congress has added one of his early hits “Azucar Pa’ Ti” to the National Recording Registry.

He could add ethnomusicologist to his resume.

His latest album “Sabiduría” explores the bond between Afro-Caribbean and New Orleans music. On the track “Uprising,” New Orleans sax man Donald Harrison, who is also a Mardi Gras Indian chief, is heard singing the call-and-response chants that characterize this musical tradition.

“There is a great connection between Cuba and New Orleans,” Palmieri observes. “Musicians like Jelly Roll Morton had a lot of Latin flavor in their compositions.”

This leads to why African-inspired music took different paths, leading to the son in Cuba and to the blues and jazz in the U.S.

Palmieri’s explanation: Slaves brought to the Caribbean kept the tambor, but U.S. plantation owners banned them, fearing slaves would use the drum to send signals and incite rebellion. Without their percussion, slaves were left with only one instrument – their voice.

“The lament that came out of the silence of the captive working the plantation was the blues, and the blues is the fundamental of jazz,” Palmieri explains.

In the Caribbean, drums were also used in religious rituals, which evolved into dance rhythms, like the Cuban son, mambo, chachacha and danzón. In Puerto Rico, Palmieri’s ancestral homeland, they became the bomba y plena.

These rhythms found their way into American jazz in 1947 when Dizzy Gillespie teamed up with Cuban percussionist Chano Pozo to produce “Manteca,” a recording considered the birth of Latin jazz.

“A lot of the great jazz players didn’t appreciate the conga,” Palmieri says. “What they figured was ‘they’re taking us back to the jungle. But they were wrong. The tambor is what got everyone’s attention’”.

Palmieri commands attention with his music. “I dedicated my life to studying how Cuban orchestras in the 50s would excite me in less than 3 minutes. I learned it intuitively and then scientifically.”

The secret, he says, is building up tension and resistance. “I don’t guess that I’m going to excite you with my band, I know it.”