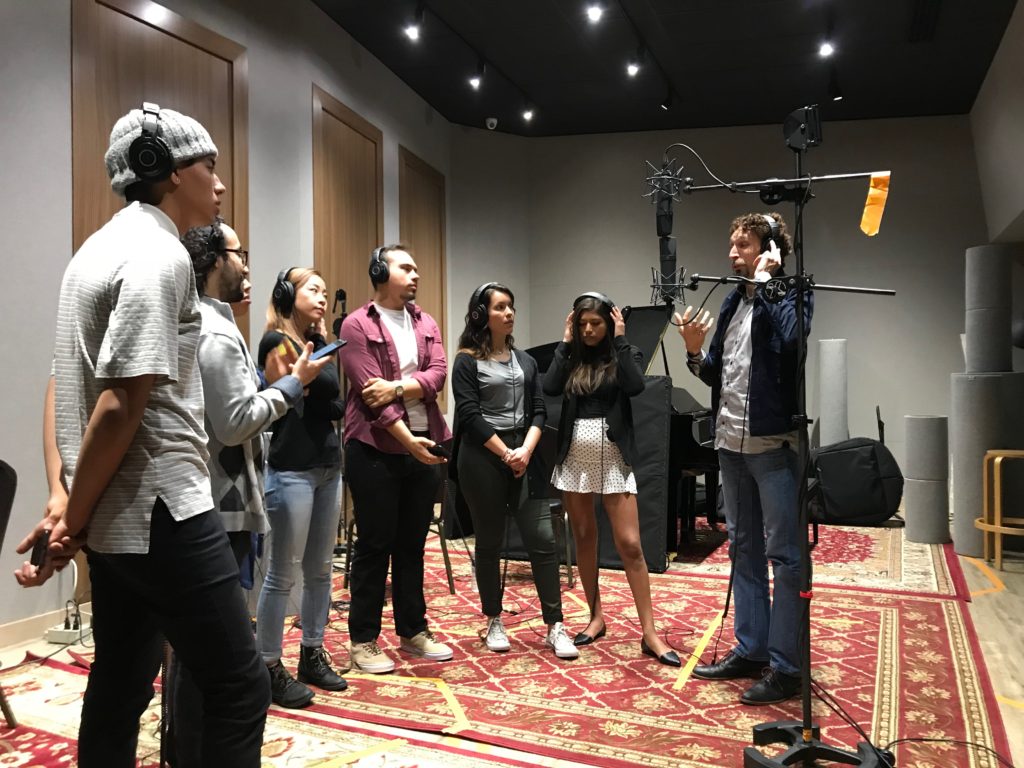 Struck by the plight of the “Dreamers” — young people brought illegally to the United States who are now in immigration limbo — John Daversa decided to speak out about it.

He did so as best he knew how: through music. The trumpet player’s resulting 2018 album, “American Dreamers: Voices of Hope, Music of Freedom,” features 53 Dreamers representing 17 states and an equal number of birth countries performing with Daversa’s big band. The album is in the running for three Grammy Awards, with nominations for Best Large Jazz Ensemble Album; Best Improvised Jazz Solo (for Daversa’s performance on “Don’t Fence Me In”); and Best Arrangement, Instrumental or A Cappella (for the band’s take on “Stars and Stripes Forever”). The awards ceremony will be held Feb. 10 in Los Angeles and televised live on CBS. [UPDATE: The album won all three Grammys.]

“I’m a musician. That has not changed,” says Daversa, who is chair of studio music and jazz at the University of Miami’s Frost School of Music. “I see the world around me, and I’m just trying to express what I feel about it. It’s something that’s been brewing in me for a while, you know: What is the purpose? What is the meaning that I can bring to this life through music?”

They’re called Dreamers because of the Development, Relief and Education for Alien Minors Act, which was introduced in 2001 but never passed by Congress. In 2012, President Barack Obama announced the start of DACA, or the Deferred Action for Childhood Arrivals program, which protects about 800,000 undocumented young people from deportation. President Trump ordered an end to DACA in 2017, but the matter is working its way through the courts.

Meanwhile, the Dreamers wait and worry.

“I just want to introduce these human beings to everyone,” says Daversa, whose grandparents emigrated to the U.S. from Sicily. “These are people that are living shoulder to shoulder with us. They were brought here as children through no fault of their own. I’ll let you discuss and talk about it.”

On the album, the Dreamer musicians tell their stories between songs. They include Saba, a doctoral candidate who speaks five languages; Caliph, who won a full, four-year scholarship to the University of Massachusetts Dartmouth but was unable to attend because he is undocumented; and Denzel, whose father brought his family to the U.S. legally on a work visa but then abandoned them. Denzel’s status kept him from achieving his dream of military service.

Response to the album has been more positive than Daversa anticipated. “I was expecting it to be more divisive,” he says.

But while recruiting and recording Dreamer artists across the country, Daversa found that folks were “very empathetic, very sympathetic” to the Dreamers’ precarious position.

Miami-based trumpeter Jean Caze, who was born in Haiti, is a member of Daversa’s big band. He says the Dreamers project “reminded me of how artists can use music to bring people together while shedding light on important issues.”

“This country is made up of a diverse fabric of different cultures,” Caze says. “This diversity makes for a richer environment to live in. Different cultures can share and influence each other to build new vibrant traditions.”

Songs Daversa and the musicians adapted for the album include “Living in America,” a hit for James Brown; Led Zeppelin’s “Immigrant Song”; and Woody Guthrie’s “Deportee (Plane Wreck at Los Gatos).” There are also iconically American songs such as “Stars and Stripes Forever” and “America the Beautiful.”

“Those are tricky to reimagine because they mean so much, and they mean a different thing to everyone,” Daversa says.

This is not the first time Daversa has successfully reworked songs everybody knows. “Kaleidoscope Eyes,” his 2016 album of Beatles tunes, also received Grammy nominations.

Daversa is coy about what’s next for him. He says he can’t talk about the project yet, but it “also is discussing some possibilities for social change. It’s something that as an educator, too, I think about a lot, just thinking about equity, diversity and gender.”

For more information on the album, go to JohnDaversa.com.