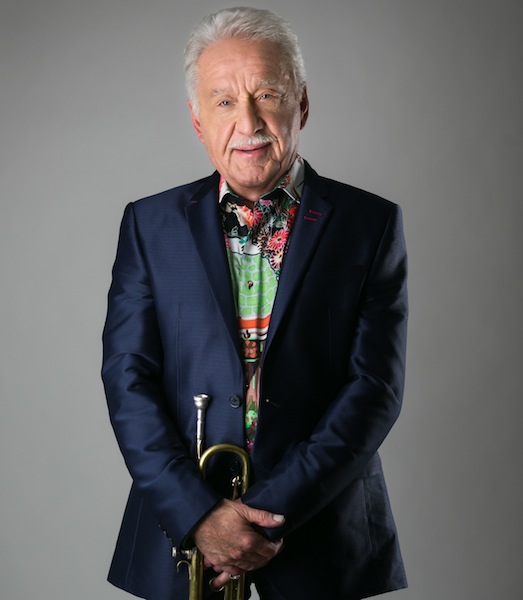 A Coral Gables church’s annual summer treat for music lovers begins with a performance by one of America’s favorite television musicians. Doc Severinsen, who led The Tonight Show band for 25 years when Johnny Carson hosted the program, stars Thursday at the Coral Gables Congregational United Church of Christ, kicking off its two-month jazz festival. Now in its 31st year, the church’s concert series runs on alternate Thursdays through mid-August.

Severinsen, who turns 89 in July, will be joined by Byron Stripling for a new show called Trumpet Kings. Stripling, artistic director and conductor of the Columbus Jazz Orchestra, is also known as a soloist with the Boston Pops. “This is going to give the audience a peek into Doc and Byron working together,” says Mark Hart, executive and artistic director of the church’s community arts program.

That pairing of jazz and classical artistry exemplifies this year’s series. On June 23, the church presents Sybarite 5, whom Creative Loafing magazine described as “classically trained to rock your f*%#ing socks off.” The group of two violins, viola, cello and bass formed at the Aspen Music Festival and was the first string quintet admitted to the Aspen Advanced String Quartet Studies program in 2008. Its diverse repertoire includes works by Mozart, Piazzola and Radiohead.

Next up, on July 7, is singer Catherine Russell. She is the daughter of Louis Armstrong’s longtime musical director, Luis Russell, and Carline Ray, a member of the International Sweethearts of Rhythm, a legendary racially mixed all-female band of the 1940s. Russell’s 2012 album, Strictly Romancin’, did well on U.S. jazz charts and won jazz vocal album of the year honors in France.

Drummer Terri Lyne Carrington is the first female artist to win a Grammy for Best Jazz Instrumental Album, which came in 2014 for Money Jungle: Provocative in Blue, an homage to a 1962 album by Duke Ellington, Charles Mingus and Max Roach entitled Money Jungle. Her quartet performs on July 21.

Peter and Will Anderson, brothers who play saxophone and clarinet, will be joined by a guitarist for a concert on Aug. 4. Praised by jazz legend Quincy Jones as “the future,” they will play tunes from the Great American Songbook and other classics as well as some originals.

The series wraps up on Aug. 18 with the classical guitar master sir Angel Romero. Knighted in 2000 in his native Spain, Romero is part of a family of celebrated guitarists. At age 16, he was the Los Angeles Philharmonic’s first guitar soloist and has since become one of the world’s most sought-after musicians. “I was finally able to get him!” says Hart.

The concert series takes place in the sanctuary of the church. Built in the 1920s in Spanish Revival style, it is listed on the National Register of Historic Places. “It’s a very intimate space,” says Hart. “You get to see these artists and interact with them close-up and personal.”

The Coral Gables Congregational United Church of Christ presents its summer concert series on alternate Thursdays June 9 through Aug. 18, all at 8 p.m., 3010 DeSoto Blvd., Coral Gables (across from the Biltmore Hotel); tickets $30 general admission, $50 for patrons; multi-show packages are available; https://communityartsprogram.org/tickets/ or 305-448-7421, ext. 153.