Coral Gables lawyer ready to open the curtain on lifelong dream: a Sanctuary of the Arts 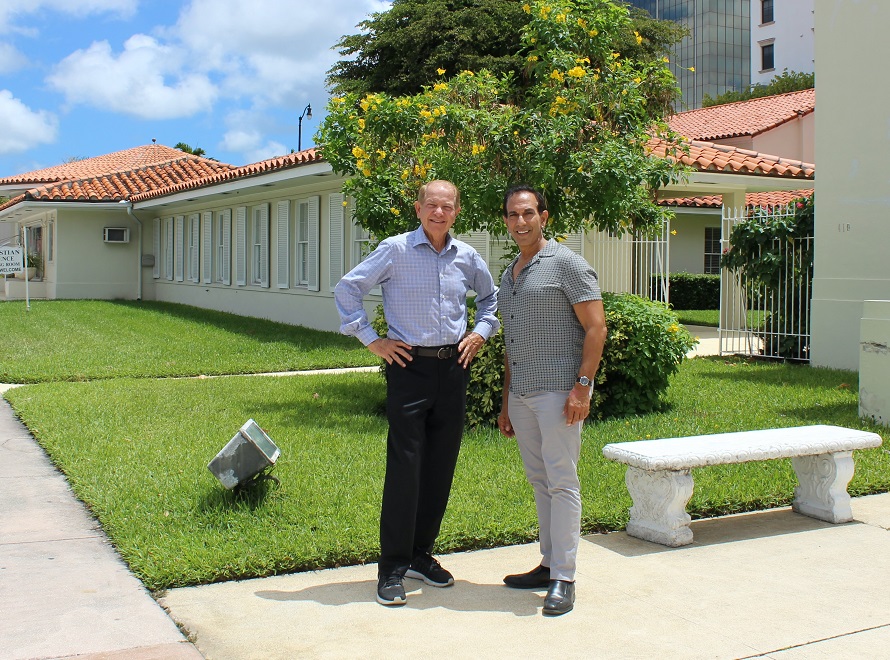 Mike Eidson, cofounder of Sanctuary of the Arts, left, with Rafi Maldonado-Lopez, principal managing director, outside of the 1-acre site that has become a the multidisciplinary arts complex. (Photo courtesy of Gaby Yero)

For years, Coral Gables lawyer Lewis S. “Mike” Eidson poured his passion for the arts into a vision for the Coconut Grove Playhouse. But after it became too much of a burden, tied up in political and legal ping-pong, Eidson turned his attention elsewhere.

“I have said that I’m still willing to help [the Coconut Grove Playhouse] because that’s a very important building and it is in a very important location,” he says. But with a grin a mile long, the devoted preservationist and arts advocate shows off his latest diamond — the First Church of Christ Scientist on Andalusia Avenue in Coral Gables.

Inside, Eidson runs up and down the aisles in an energetic frenzy. He sits in one of the church’s original theater seats, which is now refurbished. (“Lots of leg room,” he points out.)

With a long-term lease in a partnership with the First Church of Christ, Eidson’s lifelong dream of an arts complex has become a reality: Sanctuary of the Arts, which he cofounded with his wife, Margaret Eidson, is celebrating its Grand Opening Weekend, with festivities set for April 22-24, 2022.

The space is envisioned as a multidisciplinary arts venue, where small and mid-size arts organizations and individuals who can’t find affordable and accessible space can feel welcome and supported. “It also fulfills another passion — the preservation of historic properties that are so important to Miami-Dade [County],” Eidson says. 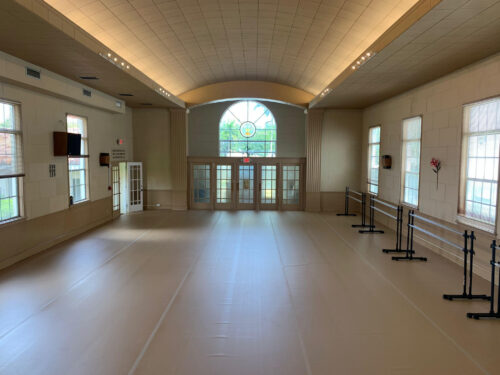 It took “about a year to convince the church that that we would be able to do something good here,” Eidson adds. In 2021, the congregation moved into a smaller sanctuary building where they are able to continue their services.

Sanctuary of the Arts operates within two large church buildings on a 1-acre stretch. The centerpiece is the 326-seat theater, and there’s also a professional-sized dance studio that is meant to double as a space for music or theater rehearsals or workshops. A courtyard separates the buildings.

“This location is world-class, and there isn’t a better site in all of Coral Gables,” Eidson said. “I couldn’t have bought this in a million years.”

Eidson has, however, committed $1 million to the project, some of which has already gone into refurbishing and upgrades. He zips down one of the aisles again to pat his hand on the stage.

“This is a Harlequin professional sprung dance floor,” Eidson says. “I wanted dancers to be able to soar. This allows them to do anything.”

Dancer and choreographer Rafi Maldonado-Lopez, who is principal managing director for Sanctuary of the Arts, chimes in to say that dance companies usually must rent a floor such as the one Eidson is beaming over. “Not here,” Maldonado-Lopez says.

Dance is only a part of what will be happening at the Sanctuary, but — at this point in the organization’s young life — it may be the most fully formed. At one point during a tour of the complex, Alice Arja ducks into one of the courtyard offices. The general and artistic director of Cia de Ballet in Rio de Janeiro, Brazil, is also the Sanctuary’s international curriculum consultant.

“We have the best ballet teacher,” Maldonado-Lopez says. “We are currently working hard to get a schedule of events together that she will curate.” 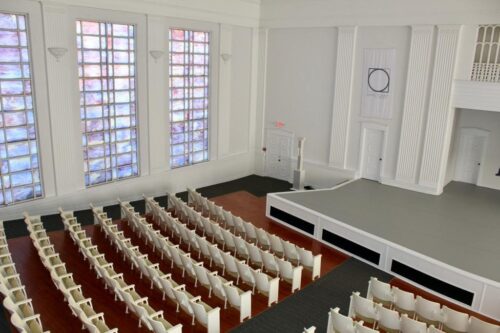 The main church building features the theater space with 364 seats and other upgrades made to the stage and interior. (Photo courtesy of Sanctuary of the Arts)

The full breadth of what the Sanctuary of the Arts is expected to offer South Florida will be on display during the weekend’s celebrations. All of the events are free, and the opening night will feature a concert and dance performance with Miami Chamber Music Society artistic director and pianist Marina Radiushina, mezzo-soprano Solange Merdinian, prima ballerina Mary Carmen Catoya, and American Repertory Ballet’s Hernan Montenegro.

Eidson has been involved with the arts for decades. In 2010, he was elected as chairman of the Adrienne Arsht Center’s Performing Arts Center Trust (PACT) board of directors, and before that he served as chair-elect. He was president of the board of trustees for the Miami City Ballet and has served on the boards of the Florida Grand Opera and Art Basel Miami Beach.

He remembers the time he became enthralled with the arts, culture and historic preservation. While an undergraduate at the University of South Carolina, he spent a year at Warwick University in Coventry, England, studying Renaissance history.

“In Europe, the arts are so much a part of kids’ lives,” he says. 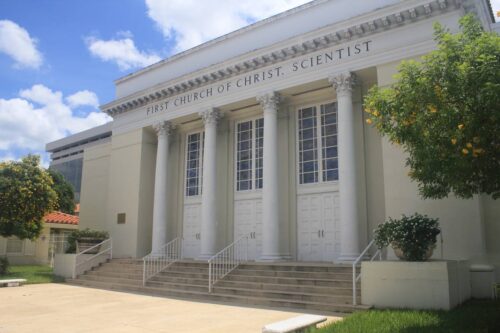 His professional career path was law, and he then went on to Emory University School of Law in Atlanta, where he graduated in 1971. Along with his wife, a pediatric endocrinologist, the couple moved to Miami in 1972. By 1974, he joined the Coral Gables law firm Colson Hicks and in no time became a partner. He is currently the president of Colson Hicks Eidson.

There’s a third space in the Sanctuary of the Arts portfolio, and it was actually the first to be acquired. A little more than 2 miles away from the “main campus” is St. Mary First Missionary Baptist Church on Frow Avenue, within the MacFarlane Homestead Historic District. Eidson says he bought the 4,000-square-foot building for almost $600,000.

“The church was dilapidated and was going to be torn down,” he says, but now it will serve as Sanctuary’s community arts center component. “This may be the most important of the three spaces.”

Inside this historic church, which is still in the midst of construction, Eidson looks around and sees his field of dreams.

“It will be vibrant with young people,” he says, before dashing to the back of the space painting a picture in the air of what he can see happening when the arts center on Frow Avenue opens this summer.

Adds Eidson: “What we’re doing here [with Sanctuary of the Arts], there isn’t anyone in town that’s doing anything even close to this. We are free to do what we want here. Free to create and curate.”

WHAT: Sanctuary of the Arts Grand Opening Weekend