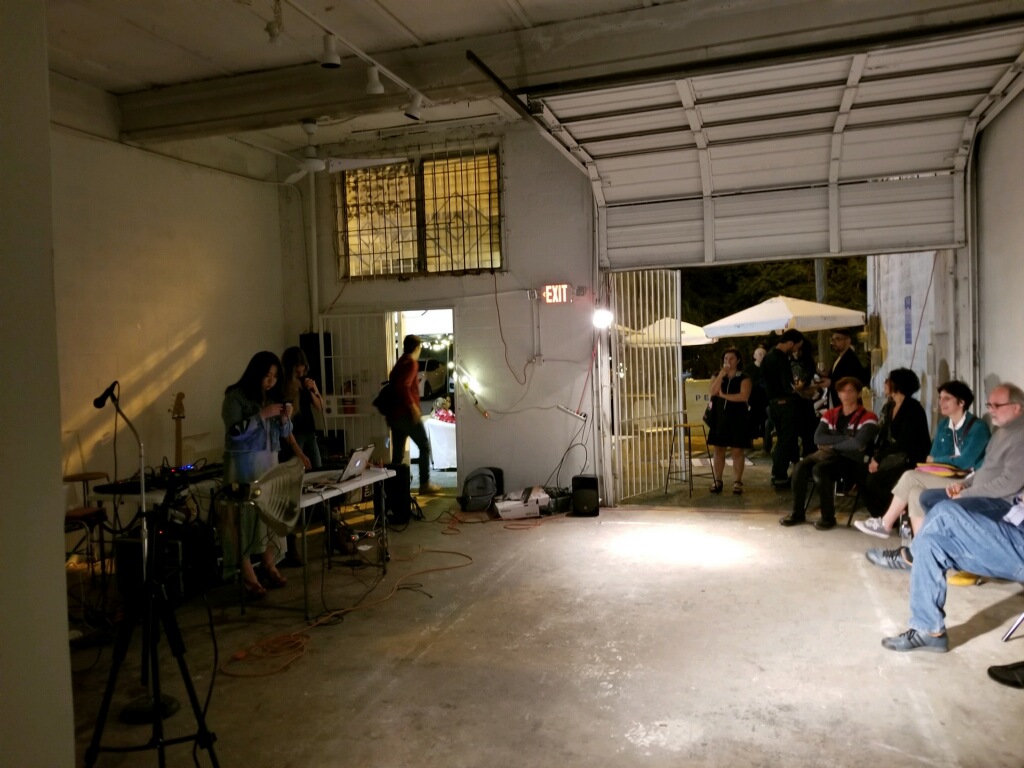 Maurizio Cattelan’s “Comedian,” aka the banana sold in three editions priced between $120,000 and $150,000, overshadowed Art Basel’s other works. It is those small and alternative spaces of this gargantuan annual gathering that make Art Basel significant for numerous audiences. Between Hong Kong and Miami, this fair exhibits work from some of the most significant contemporary artists and world-renowned galleries.

A festival of this magnitude provides a place for emerging stars, too. Art Basel has become open not only to paintings, sculptures, installations, photographs, and films, but also to live performances and music.

Organized by the Foundation for Emerging Technologies and Arts (FETA), the septet known as Contemporary Troubadour Experimentale was hosted twice this year: on Dec. 6 in front of The Miami Beach Cinematheque and Dec. 7 in The Bridge Miami and the Edge Zones of the streets of Allapattah.

Having named themselves after medieval European male musicians, these contemporary troubadours sang along with portable instruments. Without trobairitz in the name, but with female troubadour voices in the ensemble, contemporary troubadours performed their experimental music in mobile performances. They did not include lutes and old instruments, but technologies of the 21st century – speakers, magnetic tapes, Ableton.

The group involved the audience through several works. The written directions attached to their chests were clear: wave with your left or right hand. Each performer followed the reactions of audience members.

Waving triggered the addition or subtraction of tones in the breakbeat line, guitar and vocal melodies. Although compiled together in unexpected musical combinations, the execution of the performance was not very well thought out; the main challenge was to catch a glimpse of the performer.

The second performance went at a similar pace, loosening up the constraints of a stage-like setting. It let performers mix with the audience, walk around them and comment on their appearance through associations from nature (for example, they would say “ocean” for blue clothes or “grass” for a green shirt). The occasional shouts of “Art Basel” were not convincingly engaging the audience into raising their ecological awareness. They rather served as an amusing effect.

The two works that followed included electronic devices. In the first one, performers walked among the audience playing EDM (electronic dance music) on portable loudspeakers. Listeners could interrupt and distract them. The soundscape of sounds distant and close depended on one’s position in the room of The Bridge. Above all, sounds were contingent on everyone’s movement and willingness to make an impact in their surroundings. Perhaps one of the messages was that change cannot happen if there is no human connection. Can the connection lead to disconnection? 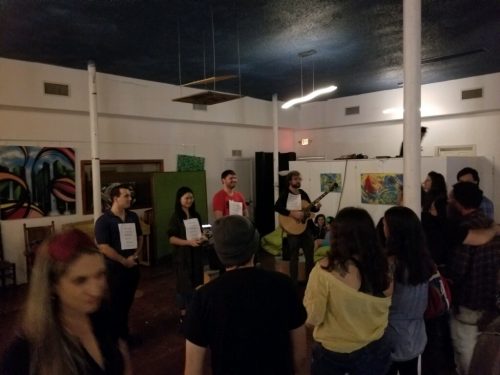 The group known as Contemporary Troubadour Experimentale involves the audience in its performances. (Photo courtesy of Juraj Kojš)

These topics continued to provoke thoughts in the next piece, in which performers walked around the space with earplugs in their ears. After the first maladroit part of the piece, where no one said a word, the performance gradually evolved through sudden, spoken words from which “connection” and “disconnection” stood out. One of the most effective elements of the quartet’s performance included the sound wall its members created while facing each other. Whenever a person walked into a space between them, it prompted the performers to hold a long chord for as long as the intruder was there.

In a concert-like setting, two artists experimented with electronics and voice. From their part of the room, the audience listened to Eastern curlicued vocal ornaments accompanied and transformed with electronics. In a physically divided ambient, the female play was actually the knitting of new meanings around the concepts of natural, distinguished, desirable, as well as connection and disconnection.

The final and central piece of Troubadour’s music playing was Kojš’s electro-magnetically sounded suitcase. In a psychedelic colorful appearance, the artist brought on-stage a suitcase that he theatrically put on a trash can. A world of sounds was released from this coffer. It responded to every artist’s movement.

Kojš chose three audience members to continue the show. Among the fortunate ones was the writer of this article. With the blindfold over my eyes, and through the physical sensations of wondering and isolation, I stepped into the interactive game with the suitcase and other guinea pigs. It led to a place between conscious and unconscious inner and outer sound worlds.

While trying not to slip on a banana peel while approaching the suitcase with a blindfold, I thought about how art continues to provoke, engage and stay unpredictable. Is there a difference in observing someone eating “Comedian,” or engaging in the Troubadours’ entertainment? This group of young musicians whose experimental music performances happened in tiny spaces of Basel illuminated the prevailing idea of Basel – concept above all.