Classical Star Awadagin Pratt Next Up in Coral Gables Series 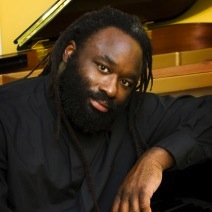 The Coral Gables Congregational United Church of Christ presents jazz and classical music in a summer-long concert series, now in its 30th season. Performances take place alternate Thursdays in the historic church’s sanctuary. On July 16, classical star Awadagin Pratt returns.
Mark Hart, executive and artistic director of the church’s community arts program, said he enjoys introducing audiences to artists who haven’t played in the series before. But this will be Pratt’s third visit because “the last two were so incredible,” Hart says.
Pratt, 49, is a prodigious talent. First to graduate from the Peabody Conservatory of Music with degrees in three performance areas — piano, violin and conducting — he also was the first African American classical instrumentalist to win the Naumburg International Piano Competition in 1992.
Two years later he was awarded an Avery Fisher Career Grant. Since then he has appeared around the country and the world as pianist and conductor, playing with orchestras including the New York Philharmonic and the symphonies of Atlanta, Baltimore and Pittsburgh, among others. His credits as a conductor include performances with the National Symphony at the Kennedy Center as well as the Toledo, New Mexico and Winston-Salem symphonies.
Also, “he’s just a heck of a nice guy, just a pleasure to have and a pleasure to hear,” Hart says. In addition to the July 16 performance, Pratt will conduct a master class the following morning, which is open to the public.
Two weeks later, Jason Marsalis will perform with his vibes quartet and hold a master class the next day. He too is returning to the church, having appeared previously as part of drummer Shannon Powell’s quartet. Marsalis is one of the famed New Orleans musical family; yes, he’s trumpeter Wynton’s brother.
The series concludes on Aug. 13 with Arturo O’Farrill and the Afro Latin Octet: the pianist and composer with eight members of Jazz at Lincoln Center’s Afro Latin Jazz Orchestra. Their recording “The Offense of the Drum” won this year‘s Grammy for Best Latin Jazz album.
Not surprisingly, Hart predicts the season finale will be “very energetic, very rousing. I have a feeling there’ll be a lot of dancing.” Dancing, in an elegant 1920s Spanish revival church that’s listed on the National Register of Historic Places? Why not? “A church is a sanctuary but it’s also a place to rejoice,” says Hart.

Awadagin Pratt plays at 8:00 p.m. on Thursday, July 16, at the Coral Gables United Congregational Church of Christ, 3010 DeSoto Blvd., Coral Gables (across from the Biltmore). The Jason Marsalis Vibes Quartet appears on July 30, followed by Arturo O’Farrill and the Afro Latin Octet on Aug. 13. General admission for the concerts is $30; the $50 patron tickets include a wine and beverage bar with tastings provided by Coral Gables restaurants. Purchase online: communityartsprogram.org/concert-tickets/store/, or call 305-448-7421 ext. 120 for more information.