Classical and Pop with dash of Broadway — all Well-Strung 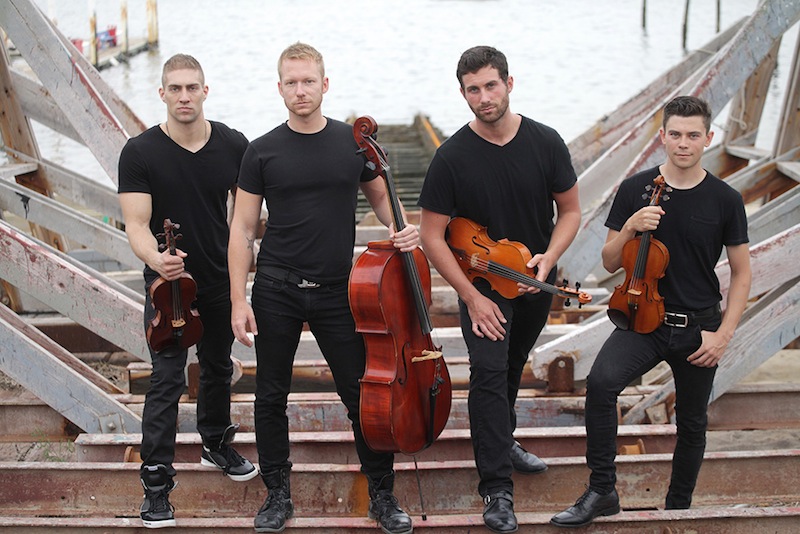 We’ll never know what Mr. Wolfgang Amadeus Mozart would’ve made of Ms. Kelly Clarkson, but the first movement of “A Little Night Music” flowing into Clarkson’s “Since You’ve Been Gone” certainly makes for a startling mash-up.

Welcome to the world of Well-Strung, a singing string quartet with the looks of a boy band and the flair of a Broadway show.

“My favorite thing right now is that we are trying to really mix classical and pop music in the same piece. That’s why this show is called Popsical,” says second violinist Chris Marchant, leader and co-founder of the quartet. “And people seem to respond. We kind of give classical music a friendlier approach that maybe makes it easier to discover.

“There is so much of it that people sometimes don’t even know where to start and we give them a sampling of music they might like mixed with popular stuff that they know — and they feel easier about it.”

Formed in 2012, the approach of Well-Strung — Edmund Bagnell, first violin; Marchant, second violin; Daniel Shevlin, cello and Trevor Wadleigh, viola, all classically trained — suggest not only a blurring of musical styles in which a given program may include pieces by Dvorak, Ravel, Britney Spears and The Black Eyed Peas, but also musical genres in which the traditional, staid presentation of the classical string quartet takes on a cabaret style.

Well-Strung will be appearing at the Black Box Theater at the South Miami-Dade Cultural Arts Center in Cutler Ridge for two shows, 7:30 and 9:30 on Saturday.

The initial idea for the group emerged in 2010 from a collaboration between Marchant and Marc Cortale, then a producer, now the manager of the quartet. Marchant, a self-declared Top 40 fan, was then in Provincetown, MA, performing in a show but also busking, playing Bach and Handel on sidewalks. Cortale heard him, approached him and soon they “just kind of tossed ideas around about what the show might look like,” recalls Marchant. “And then  we looked for other people who might be interested in that kind of project — even before we knew what it was going to look like.”

Suggesting more of a Broadway company or a musical theater troupe than a conventional string quartet, the Well-Strung cast includes arranger David Levinson (there are also arrangements by  Shevlin, Yair Evnine and Marchant), director and co-writer Donna Drake, whose credits include being part of the original production of A Chorus Line, and also shows such as Sophisticated Ladies and Woman of the Year; and producer and co-writer Cortale.

The shows “used to take more of a theater piece approach,” says Marchant. “We had a script and characters, but because we were portraying ourselves, we figured we should just be ourselves on stage. So we still have a director and we still have a script, but now it’s much looser and free-flowing. Now it’s more of a concert, more about the music and then we kind of fill in around that with stories about our lives and the music.”

As a story in the Huffington Post  noted, “In addition [to the music], each of the handsome stars offers up winking anecdotes of growing up gay in between numbers, lending much of the act the breezy feel of cabaret with a hint of vaudeville.”

At a time when audience development is seemingly a concern for every non-pop music artist and institution, the Well-Strung quartet’s audiences seem to draw from a broad spectrum of music fans, something not surprising given their eclectic programs and theatrical presentations: check their versions of Leonard Cohen’s “Hallelujah,” Adele’s “Rolling in the Deep” or Vivaldi’s “Summer .”

“Because we got our start in Provincetown, that kind of gave us a very gay demographic at first,” notes Marchant. “But since then, we have expanded to the Midwest, California and the South, and one of my favorite things with this group is that every kind of audience that sees us, be  teenagers, kids or grandparents, gay or straight couples, they seem to like it. We get a great response from everybody.”

This preview also appears with the Miami New Time.