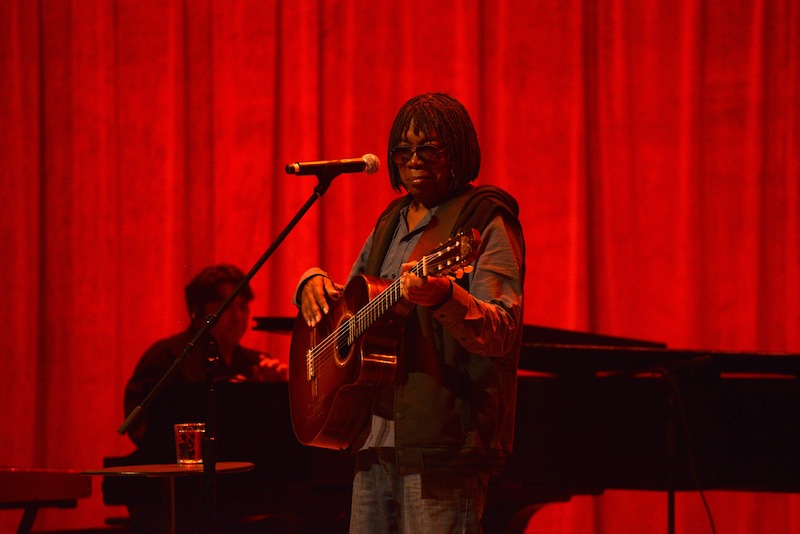 Milton Nascimento, a Brazilian legend, one of that country’s most original and best-loved singers and composers, performed at the Arsht Center last Wednesday, November 24. Seconds into his performance just about everybody in the audience was smiling. Just a few very seconds more, many were wiping the tears from their eyes.

This performance, part of a world tour for the 72-year-old Nascimento, was billed as a celebration of a career now half-a-century old. Fifty years ago his first album was released and caused quite the stir. The singer’s vocal range was as stunning as its sweetness. “If god sang he would sing in that voice,” a fellow musician said after hearing him. Nascimento has hardly stopped singing and composing since then, producing dozens albums to date and being heralded world-wide for his seamless and restless mix of Afro-Brazilian rhythms, pan Latin-American folk-songs, straight ahead jazz and a bit of rock and even an occasional nod towards pop.  He is perhaps best known in the States for his work with jazz greats Herbie Hancock, Wayne Shorter and Pat Metheny among a more than a dozen others. Perhaps it was because his performance was scheduled for the night before Thanksgiving, but woefully few folks came out to see Nascimento. This reviewer heard no English spoken in the audience and only a smattering of Spanish, most of that Argentine. Those who did fill about half of the theater were Brazilian. They were not disappointed.

His falsetto may no longer be sublime as it once was, but Nascimento’s voice remains compelling. Not only that, he sang the songs the audience loved, several of which had been the soundtrack of the politically tumultuous 1960s and ‘70s in Brazil and Argentina. It had been Nascimento who joined with another legend, Argentina’s Mercedes Sosa, to sing in Buenos Aires’ giant open air theater soon after the military had gone back to their barracks and everything seemed possible.

On Wednesday night, Nascimento got out the sanfona (a sort of miniature accordion) that his mother had given him when he was six years old. Mother and child had sung together in the streets of Minas Gerais, in southern Brazil. He sang for her that night, scatting rather than giving the audience lyrics “that could not do her justice,” he said.

At some points the audience sang with him. It was hard for many not to get up and dance.

The concert at the Arsht was full of nostalgia. But it was much more than that, thanks in part to the brilliance of the back-up band. Guitarist Wilson Lopes shared an occasional vocal with Nascimento; Widor Santiago had tight control on both the tenor and soprano sax as well as on the woodwinds so necessary for the Andean folk flavor of some songs. Kiko Contenentino was no less versatile, alternating as he did between piano and electronic keyboards, and sometimes managing both at the same time. Lincoln Cheib was downright sublime on drums and percussion. No less so was bassist Gastao Villeroy.

Would that more of Miami had allowed itself this treat.