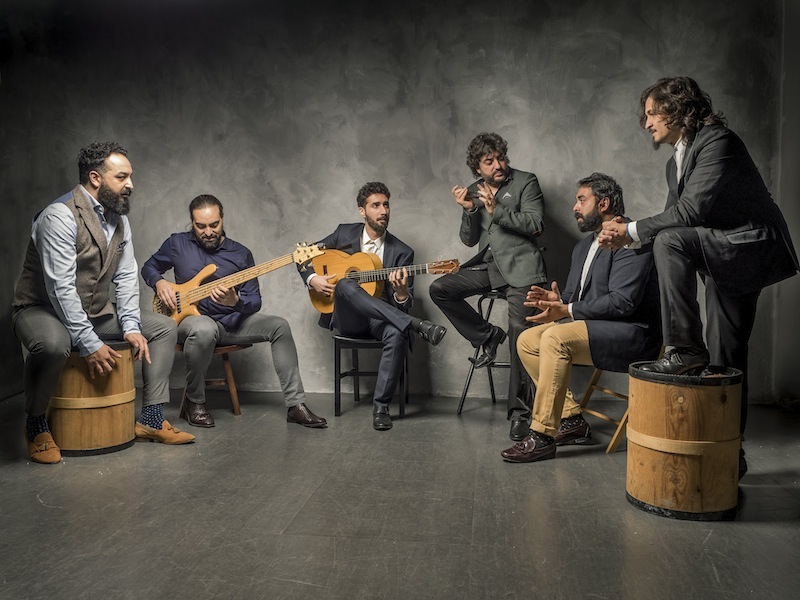 There are few artists who have had the impact in their disciplines that guitarist Paco De Lucía had in flamenco. There is a before-and-after De Lucía in flamenco. He expanded the harmonic vocabulary, incorporated instruments from outside the tradition, and had a curiosity that led him to collaborations with artists as disparate as jazz guitarist John McLaughlin, pianist Chick Corea and Brazilian pop star Djavan. He opened new vistas to flamenco artists.

He also worked with unorthodox ensembles, including for 10 years, until his passing in February 2014, his septet.

This remarkable group has been re-assembled by producer Javier Limón, a long-time friend and collaborator of De Lucía, and will be performing a tribute at the Olympia Theater in downtown Miami this Sunday, presented by the Rhythm Foundation.

The young Antonio Sánchez learned guitar from his uncles and also the excellent guitarist and composer Jose Manuel Cañizares. He then had his apprenticeship in tablaos and working with dance companies; in 2010, he joined his uncle’s group as second guitar, replacing Niño Josele, a terrific young guitarist who has since become a leading figure in New Flamenco.

Sánchez spoke to Artburst from New York, where the group started its first U.S. tour.

Paco De Lucía was your uncle, but he was also this phenomenal guitarist and larger-than-life figure in flamenco. How was that first time you sat to play with him as a member of his group?

Sánchez: I went from being a nervous wreck to feeling great peace and totally relaxed in a matter of minutes. When I was a little kid — well before I started studying, I was just playing by ear — I would play his records in my room … and play over them. So that day, I arrived, sat next to him and soon I forgot completely about his “persona” and just listened to the guitar. And I had this flashback of that little kid, listening to Paco’s records and playing along and automatically relaxed and just started to follow him — and it was wonderful.

Paco was always the same — on stage, in the street, at home. He was very humble, had a great sense of humor and when we played there was a great complicity between him and us, there were many smiles and winks, a lot of communication without words. It was like a family.

How was the perfomance with the group, very structured?Or loose, with much improvisation?

Loose. Paco was always very anarchic. The sextet had to invent everything from scratch. [The members of this group] we grew up listening to what they did so when we came together we had our homework done. We knew the music and Paco gave us a lot of freedom. … The songs had a basic structure and within that, we improvised. Every day it sounded different — it was beautiful. That’s what we want to do with this group.

Because you are the guitarist in the group and Paco’s nephew, it would seem you are first among equals. You are, after all, “playing Paco.” How do you deal with that mantle?

You have to stay centered and be prepared. Each one of us has his place. No one is bigger than the next guy. But yes, I have to do a bit more because it’s my responsibility that it all sounds like Paco, and that’s not easy.

Does it feel odd to have the Paco de Lucia group without Paco De Lucía?

For us it is a tribute to a genius, a partner in adventures who we all loved very much and we miss. And we are just giving ourselves the place he gave us: Serrano is a genius of the harmonica; Piraña is the best percussionist in flamenco; Alain is a tremendous musician and so is David, and Farru is a great dancer. Each one of us contributes his part. We are a flamenco-jazz band in which we give ourselves the space to say what we have to say.