Carson Kievman’s Out of this World Chamber Opera 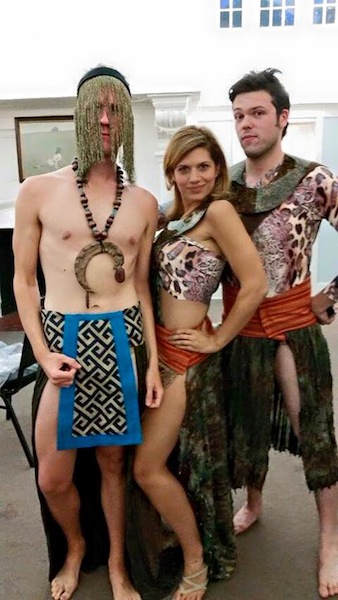 There were a few big bangs that happened when Carson Kievman, Ph.D., first began work on his chamber opera, Intelligent Systems, 35 years ago. For starters, there was Stephen Hawking’s research on the Big Bang theory and the transformative nature of the universe. There was a grant from the National Endowment for the Arts in 1980 (“when the NEA funded those kinds of things,” remarks Kievman) and a commission from Germany’s Donaueschingen Festival in 1982 to develop a new work.

“This was the first opera they ever commissioned,” says Kievman about Donaueschingen, one of the oldest and most prestigious festivals of new music. “They had worked with composers like (Igor) Stravinsky, (Maurice) Ravel before the war, and after the war (Oliver) Messiaen and (György) Lagetti, but they had never done an opera before. Unbeknownst to them, they weren’t going to get your traditional opera,” says Kievman.

They never did get Intelligent Systems. The opera needed more than the technology of the 20th century could provide to realize Kievman’s vision. Now the multi-media work has arrived. It’s “finally revised, updated and ready to be done,” says Kievman.

Intelligent Systems: The Surrender of Self in Mystical Contemplation gets its world premiere in the Little Stage Theater at SoBe Arts on Miami Beach on June 5 and runs through June 14.

“I couldn’t do what I wanted to do back then. It is truly a multi-media work and what it requires to work as a piece are projections that are almost as important as the singers and the music itself.”

While staging last year’s world premiere of his original work Fairy Tales, Songs of the Dandelion Woman, it dawned on him that the projections he required in that piece held the key to the fate of Intelligent Systems. He says he realized through the projection design by Alain Lores and with the advent of digital mapping that some of the more complicated, and expensive, requirements of Intelligent Systems would no longer present a challenge. “The digital mapping not only allows projections, but literally can map to every inch of the space.” The problem of elaborate costuming, too, which would have been prohibitively expensive in his original production (Kievman had hired well-known opera costume designer Robert Israel to create the costumes for his original, but the costs were astronomical) has been solved with the digital mapping, too. “Now we can put the singers in white costumes and digital map the costumes themselves.”

Kievman describes the 90-minute musical work as an integration of sonic and visual images. “The audience becomes passengers in a trip to time and space in a parallel universe.”

The composer/librettist storyboarded his creation as a series of natural catastrophies that occur over billions of years. There’s the development of civilization and a progression to a man-made catastrophe followed by a post-apocalyptic speculation about what a future species might look and act like.

“Intelligent Systems is first and foremost an opera, so even though there is this amazing story of traveling through time and space, the music is primary and what makes it an opera. The music is very intricate in that it follows this constant transformation of all the things that are happening, which makes it interesting and beautiful and even scary in some places.”

Six singers and 14 musicians bring Intelligent Systems to life along with a dozen or more people on the creative and projection team. Director Jeffrey Marc Buchman says there were many challenges in creating the world of Intelligent Systems inside the small space of SoBe Arts, but that his best decision when approaching the piece was to “embrace” the small black box instead of fight against it.

“When I read the story and thought of the kind of space we would be doing this in, I knew that we had to create something in a way that blends the singers into the projections. And there are so many things going on inside the projections as well, so I looked for something that would pull those ideas out. I did this with lighting, props and found a way to physically bring it into the room,” says Buchman, who knows a thing or two about how to work creatively in small and unusual spaces. He directed Andy Vores’ chamber opera No Exit for Florida Grand Opera inside the NoWhere Lounge, an actual bar/lounge, last March.

Buchman says choreography is also vital to having all of the elements come together in Intelligent Systems. “This is the kind of piece that has to take the audience on a deep journey. Part of that is in the movement,” and he credits choreographer Rosa Mercedes with her skill in working with the singers. “It is so vital to the piece in the way that they have to move.”

Kievman hopes that audiences who experience what he says is a “one-of-a-kind-theatrical event,” will realize that his opera reaches a degree of communication beyond the usual opera/music-theater experience. And 35 years after Kievman’s first attempt, his cutting-edge work could be part of the creation of a whole new conversation around what opera in the 21st century looks like.

“When we do these kinds of multi-faceted pieces, it really does redefine opera and it redefines where we’re moving towards as composers envision presenting works in new and interesting ways,” says Buchman.