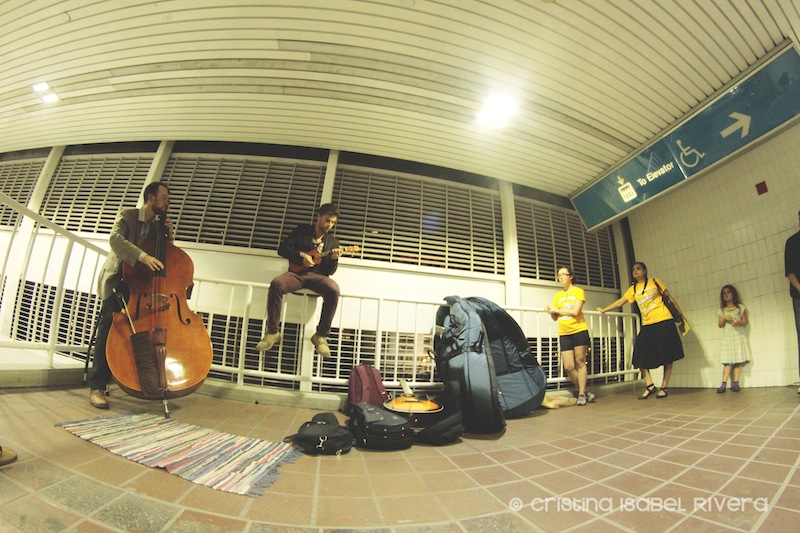 Envision a Miami where French horn quartets greet metro passengers on Monday mornings in Brickell, acrobats snake among the bars and handrails of Metro cars, a brass band welcomes visitors at the museum entrance of Miami’s Freedom Tower, and percussionists shake up café lates outside the Starbucks at Government Center.

Street performance may be a typical experience in the 21st century megalopolis but between heat, humidity, and mosquitoes it is still pretty rare in Miami. Justin Trieger and Amy Cozette San Pedro would like that to change. As the organizers of Buskerfest, a non-profit organization that arranges street performance events in Miami, their mission is to make street performance a regular feature of the South Florida urban experience.

Whether from the London Tube, New York subway or Paris Metro we all know the experience of a transport platform erupting in a classical music quartet at rush hour. Suddenly frowns and shoulders visibly relax as frustrated commuters metamorphose into a flash audience for Vivaldi’s Spring. This is the same idea behind Buskerfest. Catching them both by phone, Cozette San Pedro and Trieger explained that Buskerfest originated during community meetings in 2013, when locals were brainstorming ideas to enrich the experience of being in Miami’s urban environment.

As part of the arts group the two saw spontaneous street performance as the solution of a particular problem: “There were and are so many businesses and people moving in downtown,” Cozette San Pedro explained. “We asked ourselves, ‘how could we get people to come downtown and stay after dark?’ Live performance was seen as the way to do that.” From this grassroots effort to re-envision Miami’s public spaces, Buskerfest has flourished.

With roots in the arts themselves, both see Buskerfest as street performance that entertains and focuses attention on the encroachment of private development on public spaces. “The performers and even the audience don’t have the financial power to influence the city’s development,” Trieger reasoned. “Privatization of Miami public space is a problem — the only way to get people to take notice of this process and to get concerned and involved is to create a relationship to these public spaces.”

Now in its third year Buskerfest does that through the many festivals they organize and sponsor. For instance, Ear to the Ground, DWNTWN-Art-Days, and their once yearly festival, Buskerfest Miami, each reflect a particular strategy for luring the public downtown.

For instance, the just completed Ear to the Ground festival in September turned simply finding the event into a social media scavenger hunt. Organizers published the date and time of the performances through the Buskerfest Website and Facebook page, but it was up to the public to stay tuned to social media for clues about the exact performance location. As Trieger added, “We want people to get out of their comfort zone. It was an experiment and sure we had several people finding us — the French horn collective drew a large crowd.”

The next Buskerfest event is their annual citywide festival, Buskerfest Miami, on Dec.11. The event is free to the public and a tentative list of locations can already be found on their Website, Buskerfestmiami.com. However, registration is still open for performers as well. So if you can juggle swords on a unicycle (and can provide proof of insurance) or belong to a Shakespearean improv group, Buskerfest wants your talents to wake up Miami to – well – Miami.