Bulgarians and Cubans and Jazz, Oh My! 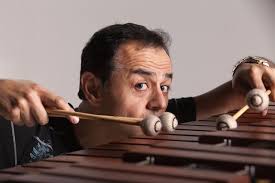 You might expect something a tad unusual from a jazz band comprised of Bulgarians and Cubans that’s led by the principal percussionist of the Miami Symphony Orchestra. And that’s what you’ll get at the Errol Rackipov Group’s release concert for its latest album, “Distant Dreams,” on Monday, Sept. 11, in Coral Gables.

“I’m always looking for new ideas, new combinations to match the musicians in a different way.” This album follows 2015’s “Pictures from a Train Window” and is, of course, a little different.

“I had a lot of the odd meters, kind of a continuation from the previous album, and of course I’m Bulgarian so I’m very much influenced by the Bulgarian folk music. But somehow I ended up with three Bulgarians in the band and three Cubans.”

How did that happen?

“I have no clue,” Rackipov said with a chuckle. “I certainly didn’t plan it.”

But the vibraphonist, who teaches at several South Florida universities in addition to performing with various classical music ensembles, suggests the combination isn’t as far-fetched as some might think. “I’ve spent a lot of time listening to different folk musics from around the world and one of the things that after a while you can’t help but notice is, in essence, the roots, the beats, the grooves are pretty much the same.”

Different cultures will call them by different names and claim to have invented them, he said, but “you can’t help but notice again the fact that they’re very similar, like almost identical in the organic part of it, and that’s what made me think about combining.”

Representing Cuba, so to speak, are South Florida favorites Martin Bejerano on piano, David Leon (now based in New York and fresh from an appearance at the Newport Jazz Festival) on alto, and drummer Ludwig Afonso. Hailing from Bulgaria are another saxophonist, Lubomir Gospodinov, who lives in Vienna; and New York-based bassist Peter Slavov.

“It’s an interesting challenge to see Cubans applying their own culture, their own heritage, and mixing this with slightly different beats and grooves,” Rackipov said.

But that’s what jazz musicians do. “I hope that the audience will realize and understand this constant search for something new, something different,” he said.“Most jazz musicians in the past, the ones that we really like, really enjoy, that’s exactly what they’ve done. They were very bold. They did it because they believed in it.”

Rackipov could be telling his own story. As a young man, he left his homeland in pursuit of a dream: to study with a legendary American vibraphonist. “I didn’t leave for political reasons or economic reasons. The only reason I left the country is because I wanted to learn how to play jazz and there wasn’t anybody there who would tell me or teach me the way I wanted to be taught. So I just decided I’m going to go to the original source and go study with Gary Burton.”

And he did, at Boston’s Berklee College of Music. Burton wrote liner notes for “Distant Dreams,” calling it “what every jazz CD should live up to.”

Rackipov is mindful of the significance of the performance date, 9/11. “Obviously this day always brings back memories, bad memories, but somehow we’re going to try to turn it around in a positive way. We’ll do our best.”