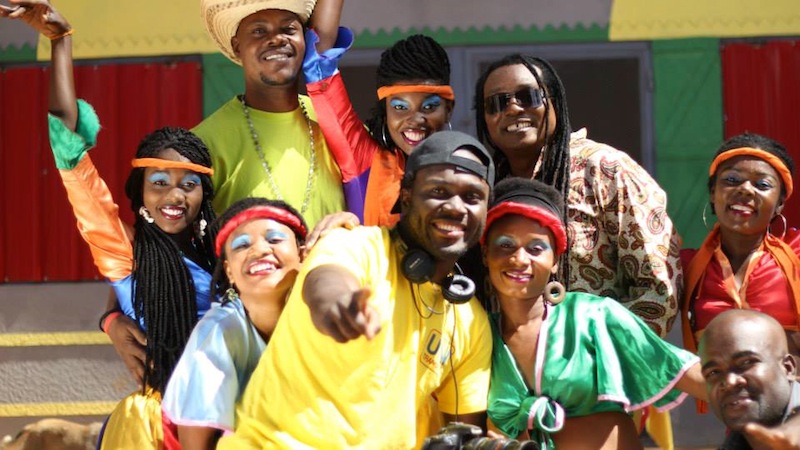 Miami’s Little Haiti Cultural Center evokes one of those eye popping, What the…? experiences Miamians have come to prize from their city. It is worth the trip just to see the center’s surprising architecture, the colorful murals, and the vigorous African dance classes in excellent studios.

However, the center has also become a global focal point for Haitian cultural programming. The Friday night Big Night in Little Haiti series regularly draws 2000 or so tourists, families, and hipsters who have made the cultural center event a once-monthly, must-stop on Miami’s cultural map.

But this November’s Big Night on Nov. 20 is especially worth the trip. The director of the Rhythm Foundation, the not-for-profit organization that sponsors the event, Laura Quinlan, explained that due to the importance of November on the Haitian calendar, “We try to put on a band in November that respects the tradition of roots music. This month we have Boukan Ginen.”

The spectrum of Haitian music includes popular dance styles like kompa and the folky rhythms of twoubadou, but Boukan Ginen is a mizik rasin (roots music) band originally formed in 1990 in Port-au-Prince. The band’s name derives from boukan, the kreyol word for bonfire, and Ginen, a specific Haitian name for the ancestral home of enslaved Africans. This band has stood both the test of time and political oppression.

At one time Haiti’s former military dictatorship suppressed the band for the politically incendiary lyrics of their hit song, “Pale Pale W.” The song is iconic of Boukan Ginen’s style — a high tempo, danceable chant where driving percussion riffs shift constantly and drive the chorus. Over both rolls the voice of the magnetic lead singer, Eddy Francois, who constantly extemporizes as he bobs and weaves in front of the musicians. In 1994 Radio France International awarded the band the Prix Decouverte, only the third Haitian group to receive the honor.

The Big Night Little Haiti series started in 2011 and, according to Quinlan, “there is nothing like Big Night anywhere else.” Big Night is about Haitian music but it includes also visual art exhibitions, food, and dancing. “We started Big Night when the complex was new and it was not being really used,” says Quinlan. “In just the five years since it started it has helped put Little Haiti on the map.” As Quinlan added, these days “people really plan outings with family, friends, and colleagues around it.”

This month’s Big Night kicks off at 6:00, with an opening act that should not be missed — Rasin Lakay, a Little Haiti-based group made up of core members of the super-fun Haitian carnival marching ensemble, Rara Lakay, at 6:30. DJ Mack spins music between sets as well.

Boukan Ginen follows at 8:00 p.m. Throughout the night arts and crafts vendors, as well as food and drinks are available for purchase.