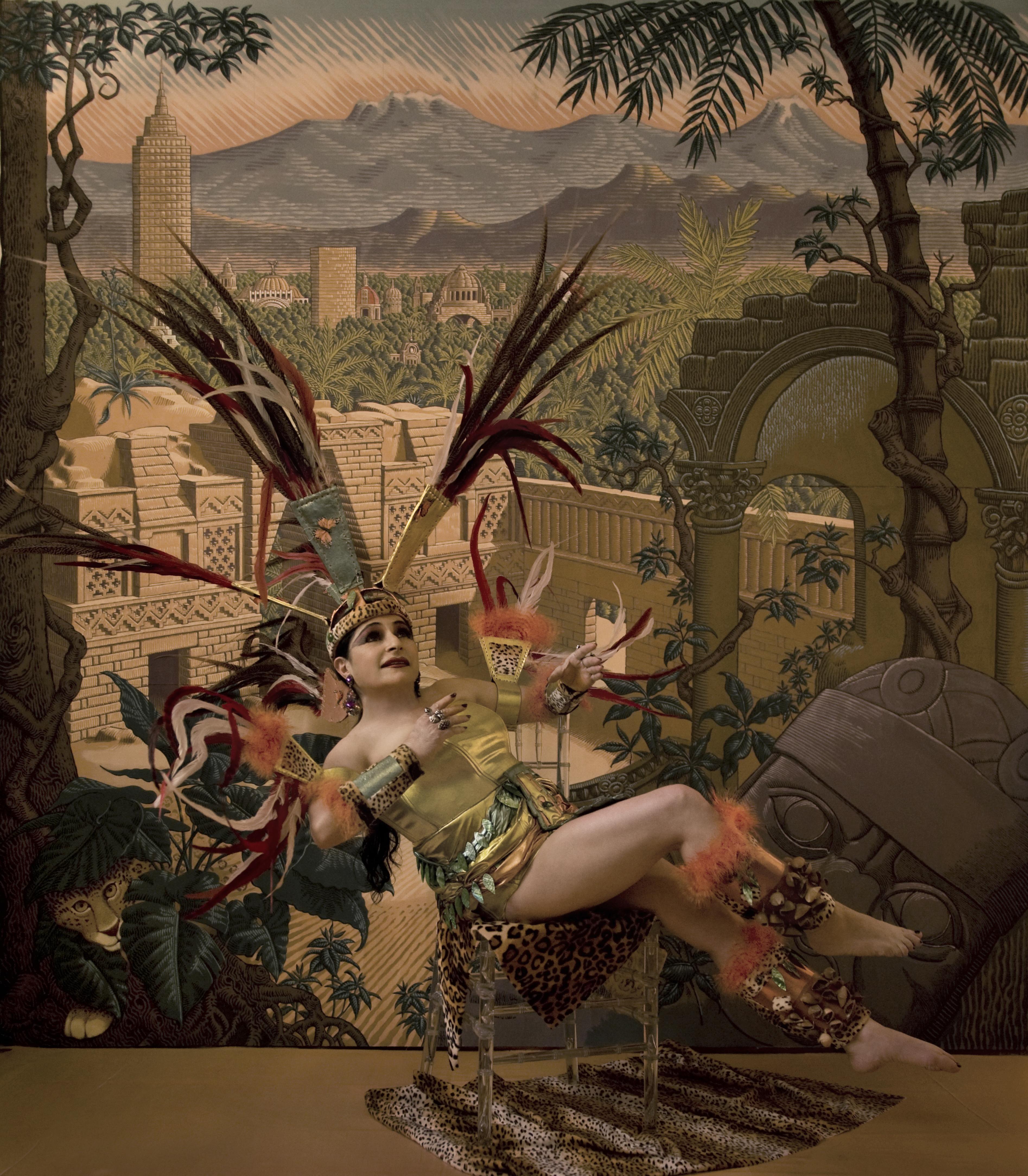 Mexican singer, actress and performance artist Astrid Hadad takes the absurd seriously. Her surreal brand of cabaret lampoons the marketing of Mexico’s cultural icons and reframes received historical truths. Her costumes, often marvels of movable set design, unfold, billow and blink. At one moment, she’s a living Diego Rivera calla lilies painting, and the next, a walking Aztec pyramid. She can turn herself into an altar, a revolver-shooting mama and a Frida Kahlo trinket.

Backed by her band Los Tarzanes, and using “songs and filthy humor,” as she coyly described it before breaking into a laugh during a recent interview, Hadad often makes her points with broad strokes. Still, have your fun, but keep a wary eye. Not every message arrives in a campy postcard image or a clever punch line. She also knows how to use humor like a stiletto, and before you know it, the stage is full of punctured certainties and deflated icons. She’s a champion for women, and the struggles for their place and image in a patriarchal society is a running theme in her work.

Hadad will bring “I Am Made in Mexico,” a sampler of several of her shows, Saturday, June 1, to the Colony Theatre in Miami Beach. The performance is presented by Fundarte as part of its Out in the Tropics 2019 program.

Born in Chetumal, on the Atlantic coast of Mexico, in a family with Lebanese roots, Hadad studied Political Science for two years at the National Autonomous University of Mexico before turning to theater, singing and, eventually, cabaret. She gained her first major recognition in 1985 with a part in “Donna Giovanni,” an all-female adaptation of Mozart’s opera directed by fellow iconoclast Jesusa Rodríguez. After that, she was off to the races, starring in and producing her own shows.

In an interview conducted in Spanish from her home in Mexico City, Hadad spoke about Mexican vaudeville, “de-composing” rancheras, Janis Joplin and more.

How did you get interested in cabaret and how did you arrive at your particular mix of music, theater, humor and visual arts?

It’s the side effect of my vocational training. After my two years studying political science, I left to pursue a career as a singer. I just wanted to sing. But then, I realized that singing was not all I wanted to do and that I needed more. I needed to say other things, and I turned to cabaret.

One influence was the movies from the golden age of Mexican film [from the 1940s to ’60s], and I also researched German cabaret. I was lucky enough to go to Germany, and I realized that [German cabaret] had nothing to do with Mexico. So I started to mix the idea of cabaret with the teatro de revista [vaudeville], which was very important at the turn of the 20th century in Mexico [roughly from the 1880s to the 1930s]. That was the way people learned about events. There were few newspapers then […] so people would attend these shows that had a format: They would have a theme, include dialogues, popular Mexican songs and also new songs written specifically for the performance. Those onstage dialogues included criticism of the government, made fun of politicians, and that was what I ended up doing — except that these shows featured many artists, and I decided to do it alone because of the financial realities of having a company. I even decided to wear the stage sets. [laughs] 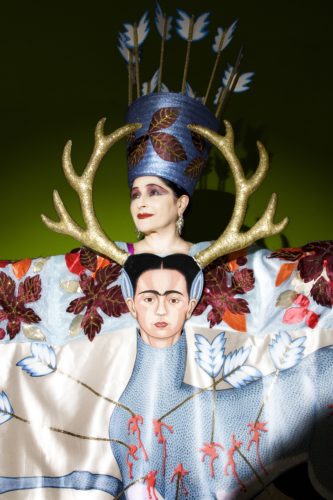 Astrid Hadad will perform “I Am Made in Mexico” June 1 at the Colony Theatre in Miami Beach. Photo courtesy Fundarte.

Speaking of which, your costumes are an important part of your show. Are you involved in their design and creation?

I’m involved from the beginning. I’m the designer because it’s my original idea. Once I develop the theme of the show, I start to do research for the costumes. And once it comes time to create the pieces, I get together with two key people, both happen to be French, Michele Desfrenne, my manager who knows a lot about art, and Bruno Fourure, a painter, and they help me bring the ideas down to earth. It’s not just design. We need to think of travel, and also I have to be able to move around onstage.

So in following the teatro de revistas tradition, your shows each have an overarching theme, and you build around it?

Normally, I pick a subject, create a synopsis of what I want to say and once I have that, I start to work on the texts and choosing the songs, and if I don’t find the right songs then I write them myself. I’m not a composer — I’m a de-composer. I’ve had songwriters complaining to me about what I’ve done to their songs [laughs], but hey, that’s cabaret. Cabaret is transgressive.

You tweak certain concepts and iconic figures in Mexican culture. In fact, in these times of nationalisms and tribalism, you make fun of certain notions associated with Mexicanity, why?

Yes, I make fun of all those things a bit — and that’s why they don’t love me. They see me as someone saying bad things about the country, when I believe I’m one of the persons who love [Mexico] and its history the most. But if we are not capable of making fun of ourselves, we won’t be able to move forward.

We have Frida Kahlo even in bathroom tissue. And then, on the other hand, we have some people who want tradition to be something fixed, immovable. Nothing in this world is fixed. Everything has to evolve. There was an association of these people that protect vernacular traditions and the ranchera [a traditional style of Mexican song] who wanted to flip me upside down because I sing ranchera but I also make fun of it when it gets too corny or too exaggerated. Of course, I ridicule that. Traditionalists don’t like it very much, but people do.

I don’t do folklore. I create new things based on our history, our mythology, our customs, all that makes our culture — but not because of that I will stop taking a critical look at them.

You have mentioned in other interviews Lucha Reyes, Edith Piaf and Lola Beltrán as your major influences. How so? And while we are it, what does Janis Joplin have to do with all this?

Lucha Reyes [1906-1944] is who claimed the “canto bravio” [uncouth singing] for women. Until her appearance, women could only sing bucolic songs, in a light, high-pitched voice. Men sang cantina songs such as “La Tequilera” or “Por Un Amor,” very macho songs. But Lucha jumped the fence and started singing songs that were reserved for men, and in a very impressive voice. And it was a scandal. When she sang on the radio, the conservative middle class would turn their radios off. But she opened the way for Lola Beltrán and many other singers. And Edith Piaf, I loved her theatrical style.

As for Janis Joplin, we loved the way she sang. She left it all onstage. When I studied theater, me and my classmates, we were all fans of Janis Joplin. We wanted to have that power, that way of telling a story. I wanted to be Janis Joplin, but it wasn’t in the cards. [laughs]

As you are getting ready to return to the United States, what is your perspective from Mexico about the border issues and the immigration disputes of recent months?

I feel great shame for my country, for making people having to go to work in the United States. I feel ashamed that Mexico, being such a rich country, is managed by people who if not corrupt then they are inefficient. We have land that needs incentives, good policies. When people migrate, it is because they have no other options at home.

It’s shameful that this is happening, and it’s also something that has been endorsed by the United States. That’s why one of my shows was titled “El Grito de la Co-Dependencia” [“The Cry of the Codependecy”]. What independence are we talking about?