And the Emmy Award goes to … UM’s Carlos Rafael Rivera 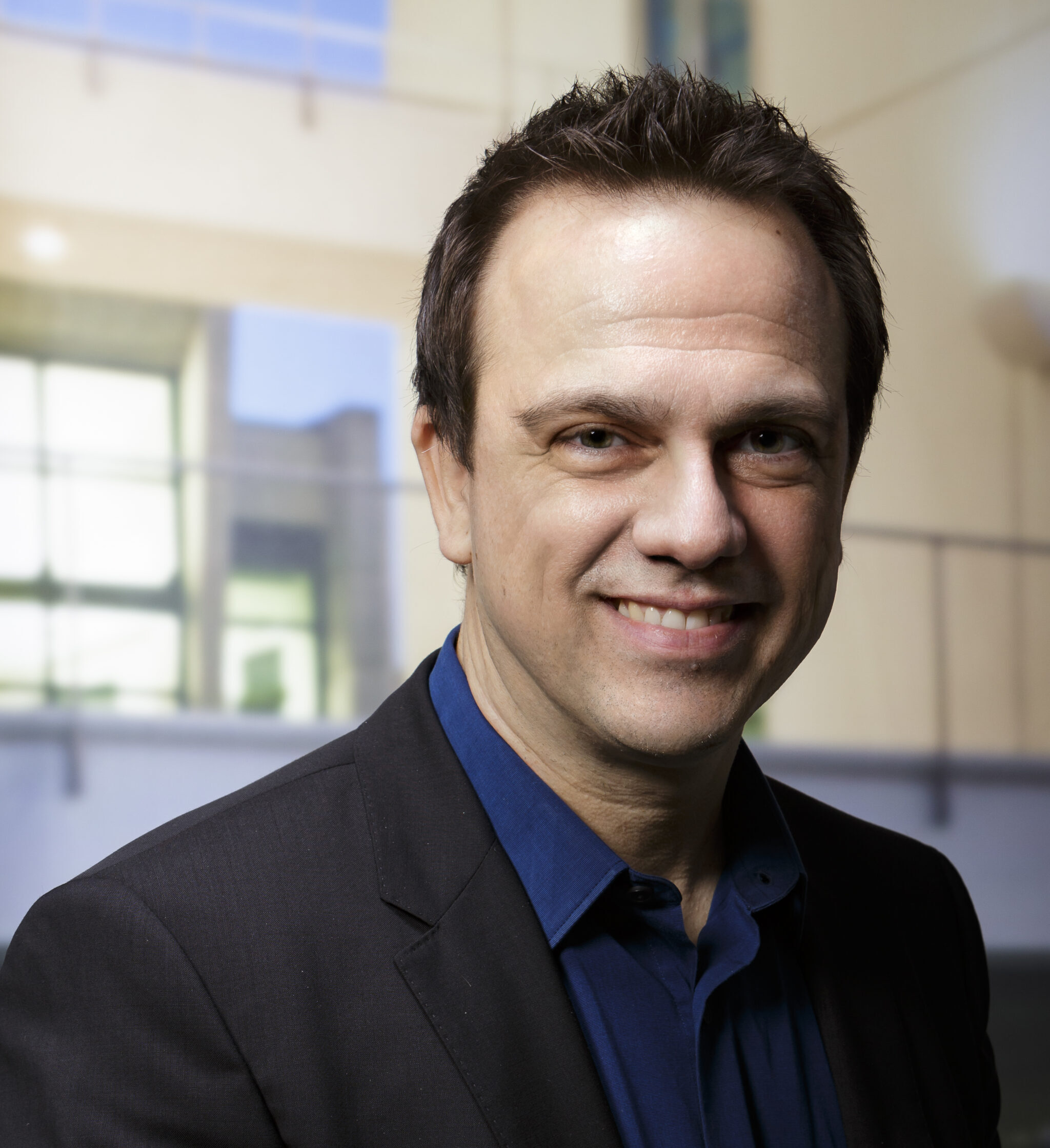 For someone who just won an Emmy, Carlos Rafael Rivera is a remarkably humble guy.

The composer — whose day job is assistant professor and director of the Media Scoring and Production program at the University of Miami’s Frost School of Music — won the award for his work in the 2020 hit Netflix series, “The Queen’s Gambit,” which stars Anya Taylor-Joy as a chess prodigy.

The official category for Rivera’s win, announced during the September 2021 ceremony in Los Angeles, is “Outstanding Music Composition for a Limited or Anthology Series, Movie or Special (Original Dramatic Score).”

The Miami resident beat out, among others, Christophe Beck, who was nominated for scoring the smash-hit Disney+ series, “WandaVision,” and is also renowned for his work on TV’s cult classic, “Buffy the Vampire Slayer,” and movies such as “Frozen” and “The Hangover.”

“I was like, ‘There’s no way I’m gonna win,’ because I loved ‘WandaVision’ so much,” Rivera says. “It was so popular, not like I was the only one who liked it – millions of people saw that show. And it was a tremendous hit because it’s such a well-made show. It’s been really surreal, to say the least. Very, very crazy ride.”

Rivera recalls meeting Beck during the Emmy-week events in L.A.: “He’s one of the top-tier composers working today. I can talk about it all day, because I was just as starstruck as anybody could be when they meet somebody they respect a lot. And we became friends.”

Rivera says he became friendly with everyone who competed in his category, which sounds unlikely until one gets to know his laid-back personality.

“What’s cool is, among all the nominees — I know them all in a way now — it never felt like a competition. It was like, ‘Look, it’s not your turn this time,’ that kind of thing. They’ll be back around, because they’re all freaking brilliant. And it’s not like the Olympics, either, where you’re like, ‘Next time I’m too old for this,’” he says, with a laugh. “We’re in a career where being young is not important, or as important.”

Ironically, if Rivera’s dream as a younger man — he’s 51 now — had worked out completely, he most likely wouldn’t have ended up scoring the music for “The Queen’s Gambit.”

In the early-to-mid-2000s, Rivera was lead guitarist for a rock band in Los Angeles that landed a deal with Universal Records and even opened for The Who. (Its various names included Zoo Story.)

Rivera could really shred on guitar back then, though in typical self-deprecating fashion he downplays his skill a bit.

“Back in my day, I could do it all,” he says, in an exaggerated grandfather voice. “[But] the older I get, the better I used to be. That’s the best way to put it. And I’ve earned the right to brag about it, because I kind of suck now. But as a guitarist, I would play everything. I was legitimately good, and I can say that because I’m not good now.”

He might be slightly out of practice on guitar, but Rivera switches freely between guitar and piano during the early stages of composing.

“I play piano to write, I play guitar to write, I sing into my phone,” he says. “It doesn’t matter how you tool yourself into a piece of music — whatever works at the time.”

Speaking of songwriting, Rivera had the opportunity of a lifetime while a student at the University of Southern California in Los Angeles. He was mentored by Emmy-, Grammy- and Oscar-winning composer Randy Newman (“Short People,” “You’ve Got a Friend in Me”), an experience that transcends his approach to creative work.

“I would never dare compare anything I did to what he does. He’s just so good at it. But he’s a very normal person, and real, that guy who just calls it straight as he sees it and is who he is around you, the president of a university or a big director, anybody. It doesn’t matter to him,” he says. “If there’s anything I’ve tried to copy, it’s that personality trait. You are yourself in any endeavor, as opposed to playing a part, like we all do to a certain degree.”

So how did that gig with The Who happen?

“We got management by a guy called Doc McGhee, who in the ’80s and ’90s managed all the big rock bands, all the hair metal bands, like Motley Crue and eventually KISS,” Rivera says. “And at the time [in 2005], The Who needed an opening act, and he just put us up and said, ‘You’re opening for The Who,’ and I was like, ‘Are you kidding me?’

“It was surreal to be backstage,” he adds, “and when you’re backstage with The Who, it’s the people coming to visit The Who, like the lead singer of Pearl Jam, Eddie Vedder, and [comedian] Jimmy Fallon was backstage … I certainly didn’t feel like I belonged there at the time. It felt like I snuck in backstage.”

The band rose to the tall task that night with a rocking set before The Who took the stage.

“I think it was well-received,” Rivera recalls. “We were unknowns, and we got a good reaction. We were playing live for a very long time, so we were a good live act. We had songs placed in movies, and the TV show, ‘Scrubs,’ and we were doing the L.A. scene. But it wasn’t the path. It wasn’t meant to be. That dream died pretty hard. It was a 10-year dream that just crashed and burned.”

Though the band’s demise was devastating at the time, Rivera is more than happy with how his career has turned out.

“Since ‘The Queen’s Gambit’ came out, I’ve been getting a lot more offers for work,” he says. “I worked on a show called ‘Hacks’ with HBO Max that just won Jean Smart her Emmy for her performance in that. So it’s been a busy year, suddenly. Very surreal.”

As busy as he’s become, Rivera says he has no plans to ditch his job with the Frost School of Music.

“It’s like, ‘All right, guys, time to pack my bags!’” he says, jokingly, about his recent success. “No, [I wouldn’t leave] because I never thought I wouldn’t be teaching. My life goal was to teach in academia. I studied and got my doctoral degree in classical music, and [I enjoy] having orchestral performances and being part of that world of classical music and having the anchor of a place to teach …

“I’m up for tenure this year, and it’s been a real life goal,” he continues. “As long as I can manage both schedules, which I’ve been able to do so far, then that would be it. I love teaching – it’s real.”