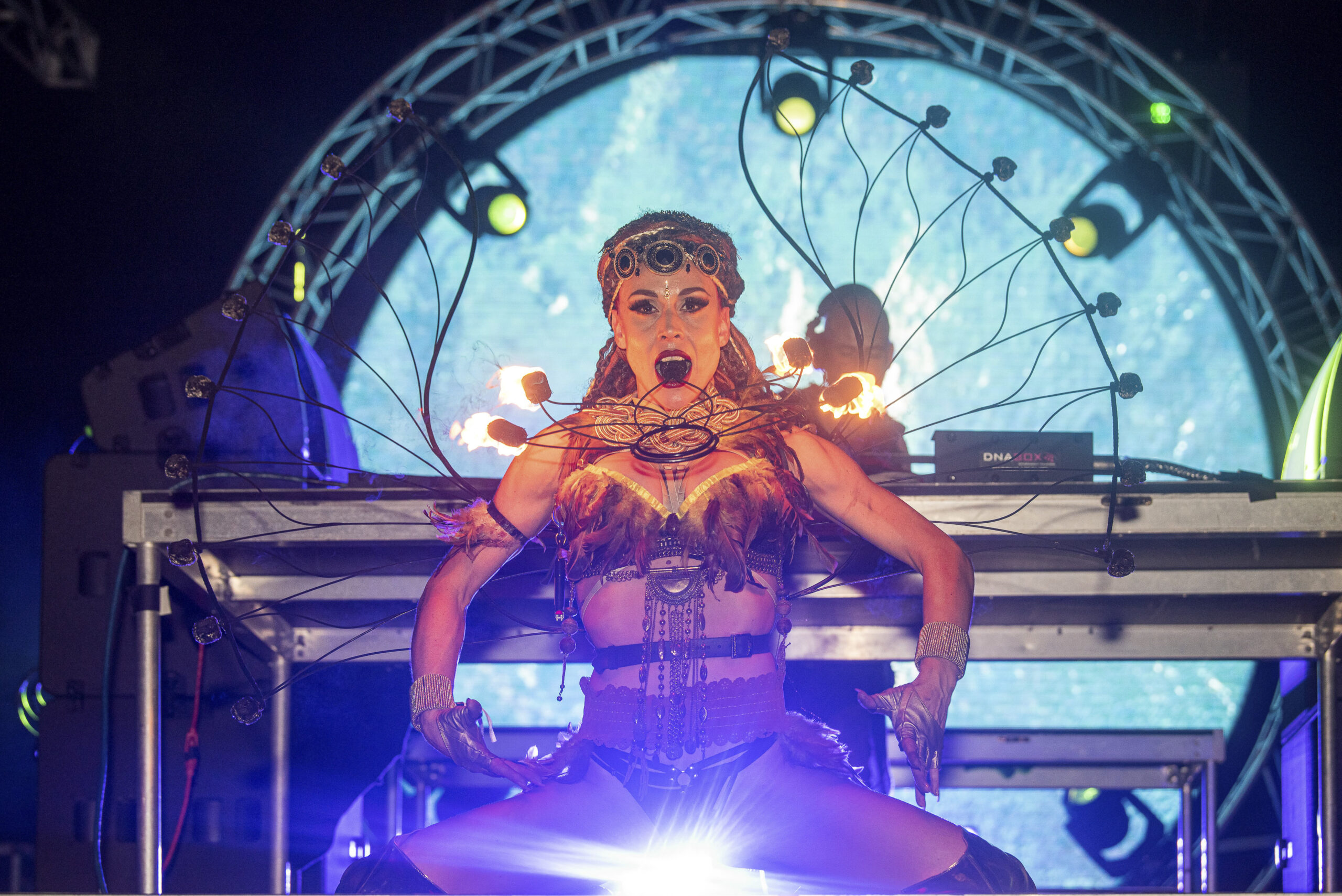 A performer in Art With Me 2021. The 2-day festival returns Nov. 26 and 27 to Virginia Key. (Photo courtesy of Stuart Tracte)

When Tulum, Mexico-based event promoter “Art With Me” selected the weekend between Thanksgiving and Miami Art Week for their flagship festival on Virginia Key, they came face to face with the challenges of launching into Miami’s crowded market at the most oversaturated time of year.

“People told us it was a really hard weekend,” says Matt Caines, a managing partner for the festival who also handles talent booking. According to him, the festival decided on Thanksgiving weekend to avoid conflicting directly with either Art Week the following weekend or Miami Music Week in March, to say nothing of the low season. They fielded offers to top acts, only to have them pull out because of the holiday.

“The challenge with the date is that it’s out of touring season,” Caines says. “At a certain point, you’ve got to take what you can get.” 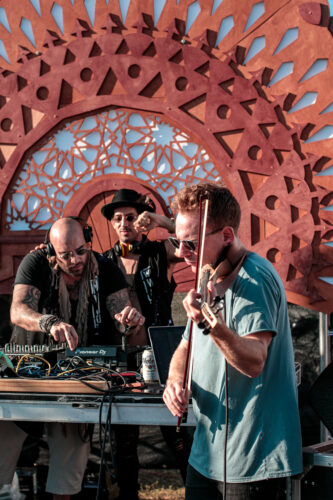 Still, the fact that the festival is even holding a second edition can be seen as proof that they’ve risen to the occasion. It helps that, rather than targeting the Art Week fly-ins or the “all-night rave” crowd, they’re making an effort to pull in a wide-ranging, family-friendly audience.

The music lineup in “Art With Me” is replete with both big international talent and local favorites from across the genre spectrum. Caines, who will himself play a DJ set under his own name, says he prioritized booking acts with a “sophisticated, feel-good, timeless sound.” Top-line DJs such as Jaime xx, SG Lewis, Moderat and Bedouin will play alongside singer-songwriters like Vagabon as well as local-origin bands Haute Tension and Magdalena Bay. Pretty good for “taking what you can get.”

And music is just one facet of the festival. “Art With Me” boasts six “core pillars” that go beyond music and arts into lifestyle, wellness and tech. “Dance With Me” is the musical component. “Breathe With Me” is a full slate of wellness programs featuring yoga, sound healing, meditation and similar activities. There’s “Eat With Me,” the food and drink program; “Care With Me,” the festival’s nonprofit foundation; and “Play With Me,” the children’s activity section. 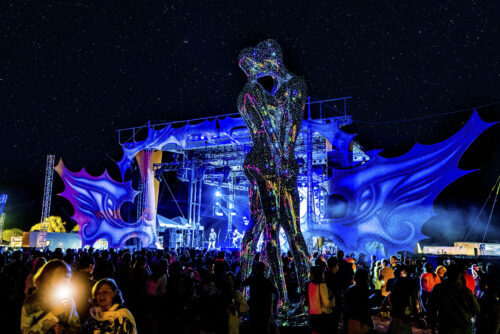 Sublime with Rome performing at the Kiss n Fly stage at Art With Me with sculpture by Michael Benisty. (Photo courtesy of Peter Ruprecht)

Then there’s the art. The festival promises plenty of incredible interactions with immersive artworks, large-scale installations, an NFT gallery, live muralists and even art classes. Last year pulled in legendary local figures like Mira Lehr. This year, works on display will include “Adelita,” Chris Carnabuci’s massive sculpture of a female figure breaking free of chains that was premiered this year at Burning Man. Berlin-based Argentinian artist Marina Zumi will present a nighttime light installation. Other participants include Daniel Jonathan Popper and Miami’s own Moksha Arts Collective. Caines sees Art With Me as an opportunity to promote artists who might not get a look-in at Art Basel or its satellite fairs.

Beyond these disciplines, there’s also the natural environment of Historic Virginia Key Beach Park, which Caines considers an essential facet of the festival experience. “The park is a pleasure to work with,” he says. “We love being in nature, that’s a component of Art With Me.”

Other festivals have also taken advantage of the island’s idyllic oceanside setting. The all-night dance music party Rakastella has taken place at Virginia Key every Art Week since 2017. Ultra Music Festival also held its chaotic 2019 edition there after being temporarily ousted from Bayfront Park.

Despite its popularity among event planners and the public, the park, a local favorite that was a segregated, black-only beach during the Jim Crow era, has faced threats from the city government as of late. On Sept. 13, the City of Miami Commission voted to take control of the park from the majority-black Virginia Key Beach Park Trust. The move came after protests over embattled District 3 Commissioner Joe Carollo’s proposal to turn the public beach into a holding zone for the city’s homeless ended with the commission voting to terminate Esther Alonso’s lease on the Virginia Key Outdoor Center. 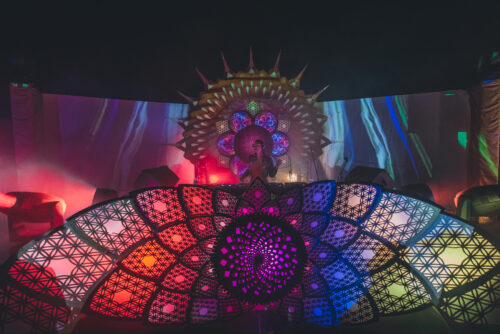 Cole Knight at the Palmetto Stage at Art With Me 2021. (Photo courtesy of offbrandproject)

“Art With Me” may be a chance to transcend these concerns, at least for a weekend. Caines emphasizes it as an event for everyone and a chance for the community to connect and enjoy art, nature and much more in a setting that’s as far as possible from the white tents and gallery walls on South Beach.

“It was a challenge to move into the U.S. and start a new festival, and this year starting in Year Two we’ve gained a lot of momentum and a lot of growth,” he says. “We’re going to deliver an amazing experience, and we’re just going to keep growing and gaining opportunities to achieve more over the next couple of years.”