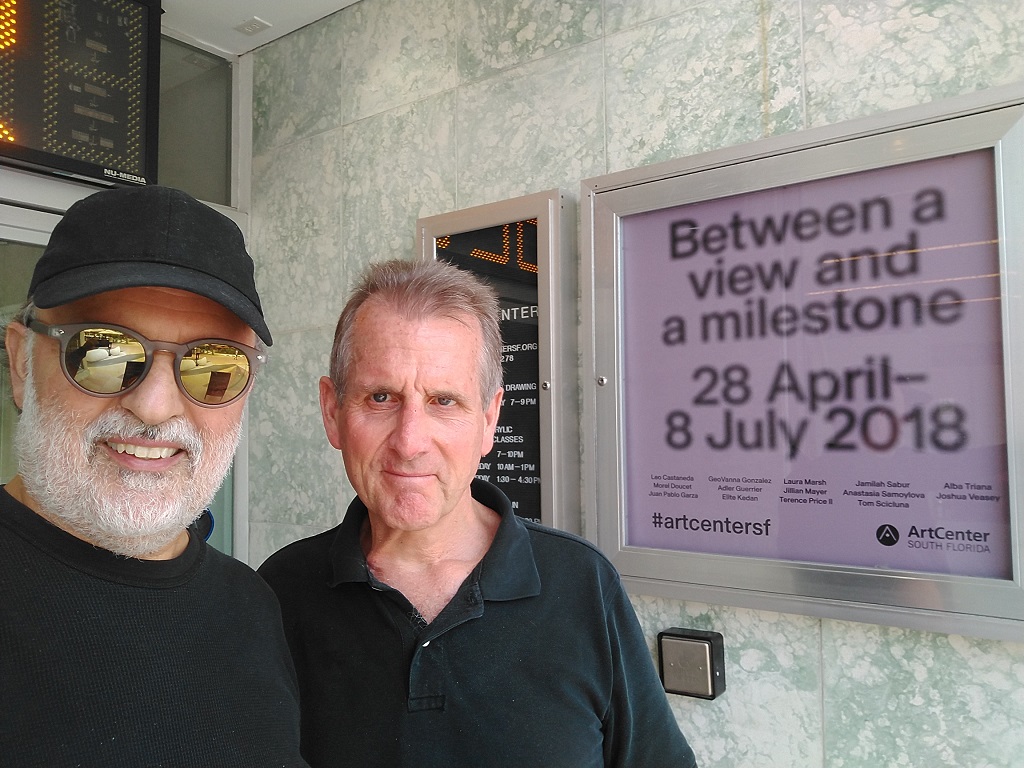 “This has been a place for research. I’m an artist who does that,” declared sound artist and impresario Gustavo Matamoros, describing Audiotheque, an intimate black box studio at ArtCenter/South Florida on Lincoln Road. Internationally recognized for works that are wide-ranging in style and format, Matamoros devises sound installations for specific architectural or outdoor spaces and traffics with other audio experimenters who defy genre categories.

Since 1967, when he came to Miami from Caracas, Matamoros has tirelessly cultivated regional interest in sound art – his own and that of colleagues. Since 2009, much of this effort has been anchored at ArtCenter/South Florida. “They asked me to create a sound piece for the façade,” he said about his initial connection to the pioneering visual arts “colony” where he designed both a sound art program and a speaker system hidden under the storefront awnings.

His ArtCenter association continues, as Audiotheque, now located upstairs at 942 Lincoln Road, serves as a recording studio for artists in residence, presentation venue for “Listening Club” enthusiasts and concert hall for such performances as the biennial Subtropics Music Festival and annual experimental music Marathon, scheduled from 5:00 p.m. to midnight, Saturday, June 16.

Matamoros, interviewed recently while he and exhibition designer Freddy Jouwayed were installing three new arrays of loudspeakers, described summer programming and September’s inauguration of Audiotheque 2.0, whose implementation supplements existing acoustics with 32 channels, engineered “to turn the Audiotheque into the only sound art gallery in Miami.”

New compositions from Robair and Driscoll will be incorporated in future performances.

Miami Beach native Frehling provided anecdotes and analysis of his working method for installations. Usually based on activating the innate sonic properties of spaces, his projects began in the 1970s and range from the Sterling Building – just across Lincoln Road – to Iki, Japan.

On June 16, the Subtropics Marathon offers performances that encompass the wide spectrum between lyrical delicacy and industrial bludgeoning of the senses.

The full program (subject to change) is available at  http://subtropics.org and includes 40 artists. Most compositions run 10 minutes or less, and audience members are welcome to come and go throughout the evening. There will be premieres, such as David Dean Mendoza’s appropriately titled New Piece, which features a traditional Mongolian two-string bowed instrument, combined with live electronics.

Marriages between electronic and acoustic sound sources – both harmonious and dissonant, pre-recorded and improvised live – are prevalent; unaltered instrumental performances are rare, but welcome.

Federico Bonacossa is an accomplished guitarist, but his El-Evatae features subtle interaction between long glissando notes, played by Steven Eckert on slide trombone and Bonacossa’s responsive “simulacrum.” The composer uses computer analysis to instantaneously analyze, synthesize and generate tones that mimic and merge with those of the brass instrument. Listeners are challenged to determine which notes are “original,” but more importantly to appreciate the emotional sense of reaching and falling evoked by the melding melodic lines.

Describing the performance of Our Soft Selves, composer/musician Ed Bobb emailed, “The musicians that will perform in jamJam Strawberry are Sony Mao & Emile Milgrim in the flesh, Dreamy Sun in the flash. The Inertials’ Freddy Jouwayed will perform the optics.”

One piece comes with flashing light warnings; another, created by The Creative DestructionTM team, will play propaganda music from the north and south of Korea, simulating the psychological war that’s hopefully winding down.

Matamoros passionately advocates careful listening as an intimate way to connect to the world. The Marathon, summer programs and Audiotheque 2.0 provide ideal opportunities to indulge in what he hopes to inspire as a habitual way of being.